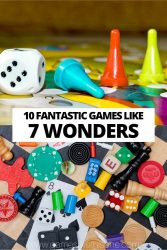 7 Wonders has seen countless expansions and reskins over its lifespan but still, the fans clamour for more. They love the look, the smooth gameplay and they want more. This is why we’ve recommended ten games like 7 Wonders today.

These are ten games that can stir up that competitive cleverness you can only seem to find when board games are involved that will hopefully scratch that itch when the 7 Wonders box is looking a little bit worn.

Because let’s be honest here, if you’re looking for games like 7 Wonders then you’re either a fan of fast-paced card development games or world domination. And these recommendations have them both!

First off, we have Hadara. This one comes in a smaller box and with a smaller price tag but is otherwise a very similar game to 7 Wonders. This civilization-building board game is played in three phases and is set in Ancient Arabia which is where it gets its name.

Everyone at the table will be trying to max out their growth in military power, income, agriculture and culture for Victory points at the end of the game.

However, in Hadara, the two to five players will take a 2-part card draft where they will be able to build their hand by drawing themselves as well as by drawing out of their opponents discard piles.

This means all players will have a heightened investment in every other players’ turn. One man’s trash might quite literally become your treasure.

Architects of the West Kingdom

Architects of the West Kingdom is the perfect board game like 7 Wonders for the player who loves thinking multiple steps ahead.

This game is set at the end of the Carolingian Empire and pits players against one another as royal architects, trying to impress their King. To create structures for him they need to collect the materials, gather the labour force and set them to work all while their rivals try to stop them.

Under the stress of it all, some of the players may be swayed to nefarious acts. But they’ll need to be careful not to have their bad deeds outweigh the work they’ve done because in the end, their virtue will be judged and they can’t be found wanting.

This is the perfect choice for people looking for a change to games like 7 Wonders because while the main goal is still to build the most structures Citadels has a unique play style.

Every round two to eight players will take on new roles and gain the abilities that come with them as well as that role’s place in player order. Then each player will get to draw district cards or gold coins and build in their city.

In this way, the players constantly get to change roles and their goals depending on what they’ve been able to pick this turn and what was randomly discarded by the king.

A player may have accidentally ended up with the assassin’s card this turn but you can be sure they’re using it to get payback on the player who was a thief and stole all their gold last turn.

Through The Ages: A New Story of Civilization

The new edition of Through the Ages has a number of changes, both to its gameplay and included components. But ultimately it offers a larger scale and more balanced gaming experience than the older version. It would definitely be the one that I suggest when recommending solid engine building games like 7 Wonders.

In the three ages of the game, two to four players will try to build their civilizations to be better than any other. They’ll do this by discovering new technologies, build wonders, maintain a military and elect powerful leaders.

However, their opponents will be trying to steal their resources and science before they use it, kill their leaders and pillage their population. This is where the military comes in handy.

Alma Mater is a resource management game like the others on the list but this one puts players at the helm of a university instead of the baser ancient settlements that can take over this genre. Although remembering what my uni accommodation looked like most Sunday Mornings, there’s really very little difference between the two.

In this game, two to four players around the table will be strengthening their school’s image by recruiting amazing staff and awesome students, gathering and trading knowledge with other schools and becoming experts in the four disciplines they have.

The rules are expansive but engaging and this one is delightful to play. You can really see the work that has gone into the beautiful art and components included as well.

If you’re looking for a splash of magic with your set collection games, look no further than Atheneum: Mystic Library.

In this game, two to five players are in the library studying before a magic exam and need to clean up before they leave.

They will play cards to give benefits to themselves and the others at the table but in the end, this is a competitive board game like 7 Wonders and the one with the fullest, most decorated and most organised shelves will win.

If players can recreate the pattern on one of the objective cards in their shelves they can whisk it away with their magic wands and earn even more points. This is a nice change from the building construction but still has a lot for any 7 Wonders fan to sink their teeth into.

With Everdell we’re getting back to the basics with recommendations for games like 7 Wonders. We’re back to fighting your friends and family for resources to create the greatest settlement known to man or beast.

I’m sure that you can agree though, that it’s easier to justify the aggression when in front of such a beautiful game and the expansions only give you even more beauty to gush over.

In Everdell, one to four players will be moving workers across the board to score events, collect resources or take special actions much like in the other civilization builders. Each season however all workers will be returned to their player’s hand and they’ll have a chance to place workers anew for the next phase.

Players can get caught in bad seasons and still bounce back in another so be careful not to boast too much in this one or it might come back to bite you.

Akrotiri is a game about discovering civilizations this time instead of building them. Although in the end, the players will still have a say about what these locations look like.

Two players will take on the role of intrepid explorers in Ancient Greece and each turn they will place a tile to “discover” uncharted waters of the Aegean sea and hopefully unearth the ruins of the lost Minoan temples that are shown to them on their secret maps.

They will need to collect and ship resources to fund their journeys and manage their action load around what they’re player sheet is currently showing them so there’s a good amount of information to juggle for any fan of simultaneous action board games like 7 Wonders.

Here’s one more builder board game that relies on tiles for our games like 7 Wonders recommendations.

Rick and Morty: Anatomy Park — The Game is based on the episode of hit comedy animation Rick and Morty in which we learn that Rick has been building the world’s greatest theme park inside of a homeless guy he knows named Ruben. That is where our game takes place.

Players can move the tiles that they have placed their characters on and you score points by moving your tiles to the best spots within the body rather than building up those spots independently.

However, as you are moving body parts inside of your lovely host Ruben his body is going to have a reaction to it. And what Ruben’s body releases isn’t always friendly.

Finally, I can wholeheartedly recommend 7 Wonders Duel if you have not tried it. It is similar in playstyle to 7 Wonders, making players use their hand to build resources, advance the military and create scientific discoveries to complete wonders and develop their worlds.

However, this game is a two-player version that hinges on a tug of war for cards created by the drafting method. Players both pull from a display of face-down and face-up cards that they share and can only take cards that aren’t currently covered and can earn a bonus action for certain pulls.

This new head to head style really adds a layer of competition to what is already a high-octane game at the best of times and is a must-play for fans of the original.

And you’ve come to the end of our list of recommendations, I hope that you found the choices interesting and enjoyed the read. You really can’t go wrong with anything on here, whether you’re looking to strengthen your collection with some well-regarded civilization builders or just some fun games.

We’ve tried to cover the staples of what everyone loves most about the game 7 Wonders and come up with some games that are getting amazing reviews and are personally loved. If you agree with those choices and you’ve enjoyed any of the recommendations today pick up one of the games you love the sound of! There’s no better time to pick up a board game than right now.

Are you looking for more games like 7 Wonders? Have any recommendations that didn’t make the list? Let us know in the comments! 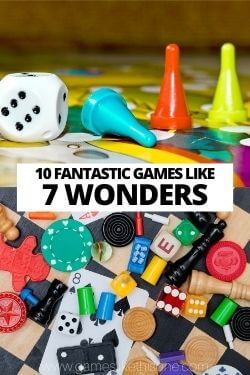