One of the original adventure fantasy board games, Talisman has had an enduring popularity since its release in 1983. Designed by Robert Harris, this roll-and-move board game has had players taking on the classic roles of adventurers and attempting to defeat evils across the land for decades. It’s no surprise so many gamers are after board games like Talisman.

Talisman is a competitive, 2-6 player board game suitable for gamers aged 9+. The rules are simple – choose a character, roll a six-sided die to move them around the board, fight monsters, collect rewards, and level up your character until they are strong enough to move to the centre of the board and take on the final villain. The first player to reach and defeat the final villain wins.

Whether you’ve been playing Talisman for years or you’ve recently picked up this board game classic, you may now be after games similar to Talisman to add to your collection. If that’s the case, look no further. These 10 games will excite any gamer with a love for adventure.

If you love chucking dice and adventuring in Talisman, you’re sure to love Roll for Adventure. Designed by Matthew Dunstan and Brett J. Gilbert, this 2-4 player dice game is suitable for gamers aged 10+ and will be fun for families and seasoned gamers alike.

Roll for Adventure is a cooperative board game in which players must work together to defeat the Master of Shadows by collecting crystals.

The board is made of four parts with various places for dice to be placed to complete tasks. Once the tasks are completed on three of the four boards, enough crystals will be collected to defeat the encroaching evil.

But watch out – during the game the Master of Shadows sends his minions in the form of monster cards. These attack the four lands and the game is lost if any land falls.

If you enjoy the retro feel of Talisman, Escape the Dark Castle is a fun alternative with a dose of horror. This cooperative card game is designed by Alex Crispin, Thomas Pike and James Shelton, with great art by Crispin, and can be played by 1-4 players aged 14+.

In Escape the Dark Castle, players are attempting to break out of a castle where they have been imprisoned for years. But there are horrors and tricks along the way. Players will defeat or out-manoeuvre creatures, collect items, and try to survive long enough to escape.

Anyone looking for games like Talisman will find plenty to love in Escape the Dark Castle, a simple yet truly atmospheric adventure game.

If you’re after games similar to Talisman in which you can level up your adventuring character and watch them grow, Call to Adventure is the perfect game for you.

In Call to Adventure, 1-4 players create an adventurer and develop their character, backstory, and destiny over the course of the game.

Players will attempt to gain character events or traits on their turn. To gain events, players roll a set of runes according to the stats they need to acquire that event and what they already have. As you gain more and more cards, your character grows in power.

Designed by Johnny O’Neal and Christopher O’Neal, Call to Adventure is perfect for anyone looking for board games like Talisman who also loves adventure, creating unique characters, and easy gameplay.

The ultimate adventuring board game, anyone who enjoys creating characters and going on adventures in Talisman and is ready to join the big leagues, Gloomhaven could become your new obsession.

Isaac Childres’ campaign, cooperative board game is a take on roleplaying classics like Dungeons & Dragons. You will choose a character, develop their skills and powers, and go on many adventures with your companions over multiple games.

Gloomhaven is an epic fantasy game that requires a steady group of gamers to play with over many games.

In Curt Covert’s Cutthroat Caverns, 3-6 players choose a character and together you will explore a dungeon and try to stay alive.

The game takes place over nine ‘encounters’ with monsters and players use cards from their personal deck to defeat monsters. You score points if you are the player that kills the monster.

Relic is the Warhammer 40k take on Talisman. Designed by John Goodenough and Jason Walden, this 2-4 player game is perfect if you want a game exactly like Talisman but with a new setting.

In Relic, players choose characters and move around a board of locations, complete missions, and defeat enemies to gain rewards and experience so they can defeat the final evil beyond the Warp rift.

Like Talisman, you’ll roll a six-sided die to move through the three regions on the board, level up your character, and try to be the first to reach the end and defeat the final villain.

Relic is a sleeker game than Talisman and feels a little less luck-based, so it’s ideal for anyone after board games like Talisman who loves a roll-and-move board game.

How does an adventurous board game with a good dose of cuteness sound to you? If you’re after games like Talisman and love a cute board game, Mice and Mystics could be your next addiction.

In this 1-4 player, cooperative board game, the players have been turned into mice who must fight their way through a castle. Rather than fighting the usual foes, however, your enemies will be spiders, cockroaches, and even the dreaded castle cat.

Jerry Hawthorne’s Mice and Mystics is a fun, unique adventuring game that fans of Talisman will adore.

A quirky alternative to Talisman is Paul Dennen’s deck-building adventure game, Clank!. In this 2-4 player game, suitable for gamers aged 12+, players will sneak through a dungeon and collect as much treasure as possible before the dragon wakes up and fills the place with fire.

In Clank!, players build up their deck that allows them to move around the dungeon, fight monsters, and collect treasure. The deeper players delve, the better the treasure.

As players move around the dungeon, however, they make noise. This adds ‘clank’ tokens to a bag, which are drawn at the end of each round.

When too much noise has been made, the dragon will wake. Any players who don’t make it out in time automatically lose the game. The players who do survive count their treasure and the player with the most wins.

Legends of Andor is a campaign game in which players complete quests over six scenarios. Like Talisman, each player is a unique character with their own special abilities. Players will level up and acquire useful items as they progress through the storyline.

Players move their character tokens across a huge map. Monsters also move around the board and players will draw event cards too. Each scenario has its own set of cards that introduce new elements and rules to the game.

Players must defend the castle on the map, defeat monsters using dice, and meet the objectives of the scenario before time runs out.

Most of the games on this list have traditional, Dungeons & Dragons style fantasy settings. But if you’re after adventurous games similar to Talisman, you can’t go wrong with Corey Konieczka and Nikki Valens’ Eldritch Horror.

Set in the Lovecraftian universe, Eldritch Horror is a more complex game on this list and suitable for 1-8 players.

In this cooperative board game, players take on the role of investigators travelling across the world gathering clues and attempting to stop the Ancient One from destroying the world. Eldritch Horror has different ‘Ancient Ones’, each with their own unique deck, to play with.

Eldritch Horror is an intense and exciting game that is perfect for anyone who loves Talisman and wants to kick things up a notch.

Talisman has been popular with board-gamers for decades, but with so many exciting and adventurous games on offer today, you can branch out and try one of these fantastic games like Talisman.

Are you searching for a game that’s similar to Talisman? Have any recommendations that didn’t make the list? Let us know in the comments! 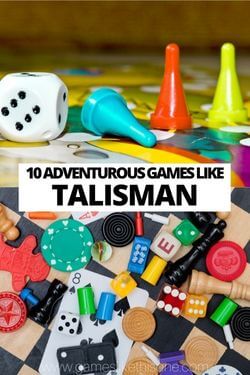