The spectral game of elusive art and silent deduction, Mysterium, is hugely popular amongst both seasoned and casual gamers. If you love catching hidden clues in dreamy artwork, working with your teammates to solve a mystery, or simply love the supernatural setting, this list of 10 board games like Mysterium will have something for you.

Designed by Oleksandr Nevskiy and Oleg Sidorenko and with beautiful art by Nevskiy, Sidorenko, Igor Burlakov, and Xavier Collette, Mysterium is a cooperative board game that has captured the imagination of many gamers.

One player takes on the role of a ghost who was murdered while the other 1-6 players are mediums. The ghost can only communicate clues to the players using ‘vision cards’, beautifully designed and dreamy artwork cards.

The mediums must spot the clues and work through their own lines of inquiry to figure out the murderer, the murder weapon, and the location of the murder.

If you’re after games like Mysterium, why not try Nevskiy and Sidorenko’s newer, more streamlined version of the game – Mysterium Park?

The setting of Mysterium is transported to a 1950s fairground, filled with creepy carnival figures from clowns to fortune-tellers.

The basic principles of the game are the same as the original Mysterium, but Mysterium Park is more compact and streamlined and contains even more dreamy and strange vision cards.

This 2-6 player cooperative board game is perfect for fans of Mysterium and is suitable for both experienced gamers, casual gamers, and families with kids over 10.

If you love deciphering Mysterium’s strange vision cards, Dixit is the game for you. This storytelling card game can be played by 3-6 players aged 8+ and is perfect for anyone after games like Mysterium.

Jean-Louis Roubira’s Dixit has beautiful, artistic cards designed by Marie Cardouat. Players are dealt a hand of these cards and each round one player will be the ‘storyteller’.

L’Atelier’s Obscurio has a lot in common with Mysterium, not least because the art was also created by Mysterium artist Xavier Collette. Anyone after mysterious, atmospheric games similar to Mysterium will find plenty to love in Obscurio.

In this 2-8 player cooperative game, one player takes the role of the ‘Grimoire’ while the other players are wizards trying to help the Grimoire escape the sorcerer’s library.

The Grimoire cannot talk to the wizards and can only communicate using images and clues. This is all similar to Mysterium, with one key difference – one player is a traitor.

In Obscurio, images refer to different exits from the library. Players must unanimously choose the correct exit cards and avoid traps to progress out of the library and win the game. The traitor, however, will try to lead the group astray and trap them all in the library.

If you enjoy Mysterium because you love a cooperative game with a supernatural theme, Mansions of Madness could be your next addiction.

Mansions of Madness is a 1-5 player, cooperative game designed by Nikki Valens and set in the H. P. Lovecraft universe. Players work together to explore a horrifying mansion, solve puzzles, and defeat monsters.

It is played with the help of a mobile phone app and it has a ton of replayability. Anyone after games similar to Mysterium will have fun with Valens’ Mansions of Madness.

Nate French and MJ Newman’s 1-2 player card game Arkham Horror: The Card Game is another Lovecraft-inspired game for anyone after games like Mysterium.

Arkham Horror: The Card Game is also a mini-campaign game with a few scenarios for you and your teammate (or you alone) to work through. This gives the game a strong storytelling and mystery-solving element that fans of Mysterium will enjoy.

The story is told through a deck of cards and each round your character can move around and investigate the town of Arkham to uncover the evils that live there. You also have your own deck of cards filled with resources for unravelling the mysteries of the game.

Designed by Jordan Sorenson, Muse is another beautiful card game that is great for anyone looking for games similar to Mysterium because they love deciphering the dreamy artwork.

In this quick, 2-10 player game, players split into two teams and have two sets of cards. One of the decks is filled with ‘masterpiece’ cards, with strange artwork on them by Ciruelo, Apolline Etienne, Andre Garcia, Daniela Giubellini, Will Nunes, and Kristen Plescow. The other cards are ‘inspiration’ cards with prompts for clues such as ‘say a word with exactly three letters’.

Then, all six masterpiece cards are laid out. If the guessing team gets the right card, they win that card. If not, the other team wins the card. The first team to get five cards wins.

Mysterium is a great game for anyone who loves to solve a mystery when they game. The perfect game for this that has many elements from Mysterium you’re sure to love is Deception: Murder in Hong Kong.

This 4-12 player party game is designed by Tobey Ho and can be played in 20 minutes. Each player is assigned a role in a murder investigation, such as Forensic Scientist, Witness, and Investigators.

One player, however, is the murderer, and in larger games another player may also be the accomplice.

The role of the forensic scientist is similar to the role of the ghost in Mysterium. They know the answer but can only communicate using special clue tiles. The other players must work together to decipher these, avoid misdirects by the murderer, and defend themselves from false accusations.

The Mind is a simple yet effective card game for 2-4 players that anyone after board games similar to Mysterium will have fun with. Designed by Wolfgang Warsch, The Mind is a quick and easy game suitable for gamers aged 8 and above.

The Mind has a single deck made up of cards number 1-100 which are shuffled. The game is played over 8, 10, or 12 levels and players receive a number of cards equal to the level – one card in level 1 and so on.

Players must then place all of the cards in their hands on the table in ascending order but they cannot communicate with each other.

If a player places a card too early meaning another player’s card is skipped, the players lose a life. You receive one life per number of players and if you lose all your lives before completing the levels you all lose the game.

Like Mysterium, The Mind has an element of mind-reading and deduction that make this extremely easy game actually more complex and unique than expected.

David Cicurel’s Chronicles of Crime is another great mystery-solving game for anyone after board games like Mysterium. One exciting twist that Chronicles of Crime has on similar games of the genre is it uses a mobile phone app and a VR phone headset to add a virtual reality element to the game.

In this 1-4 player board game, players will work together to solve a crime scenario. The cards and components have QR codes on them which can be scanned by the app to allow you to progress through the storylines and move around London.

Chronicles of Crime comes with a tutorial scenario and five free scenarios. After that, you can buy scenarios in the app if you want new ones to play through.

The final game on this list of games like Mysterium is another one for players who can’t get enough of using strange, artistic cards as clues. Designed by Chris Darsaklis along with a team of artists, When I Dream is a story-telling, team-based party game for 4-10 players.

In When I Dream, one player is the dreamer who has fallen asleep. The other players take on the roles of various sprites in that dream, some good and some bad.

Each round, the player to the left of the dreamer secretly tells the other sprites one word associated with the dream card on show. The sprites give clues for each artistic dream card that is revealed and the blindfolded dreamer must try and guess the first clue word.

When I Dream is a simple yet rewarding party game that anyone who enjoys games that are like Mysterium.

Board games like Mysterium are often creative, spooky, artistic, cooperative, or a combination of all of these. Whatever it is you love about Mysterium, this list has something for everyone.

Are you looking for more games that are similar to Mysterium? Have any recommendations that didn’t make the list? Let us know in the comments! 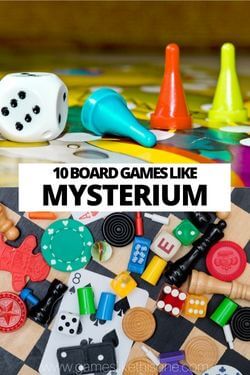