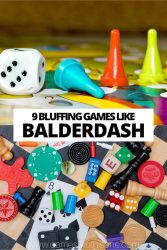 Laura Robinson and Paul Toyne’s classic party game, Balderdash, is a 1984 repackaging of the old parlour game, Dictionary. In Balderdash, players read out cards with obscure words that few of us have heard of.

Players must then write down what they think is a plausible definition for the word and will score points for any player who every opposing player who thinks your definition is correct.

Balderdash is in many ways a word game. If it’s a word game you’re after, our list of word games like Boggle has you covered. In this list, however, we’re focusing on another important element of Balderdash: bluffing.

Yes, Balderdash is a word game, but it really doesn’t require skill with words. Instead, it requires bluffing skills. Convincing your fellow players that your definition is right is all about bluffing – you could even beat out a player who has the right definition if your bluffing skills are good enough.

So if you like Balderdash because you love bluffing, this list of fun bluffing board games that are similar to Balderdash has you covered.

Wits & Wagers is a great party game with plenty of bluffing, making it perfect if you’re after board games similar to Balderdash. This 4-18 player game is designed by Dominic Crapuchettes and you’ll be relying on a blend of general knowledge, betting, and bluffing.

In Wits & Wagers, you’ll be answering questions that you almost definitely don’t know the exact answer to. You might be asked to guess “how many feet wide is an NFL football field?” or “in what year did the bikini swimsuit make its first appearance?”.

Players make their guesses and then place bets on which answer they think is closest – you score points for being the closest, for betting on the closest answer, and for players betting on your answer.

Here’s where the bluffing comes in. Before players bet on answers, you can defend your guess. If you can convince players that you’re the closest, you’ll score points for their bets even if your answer isn’t the closest.

If you’re looking for games similar to Balderdash, Skull could be your new favourite. Designed by Hervé Marly for 3-6 players, Skull is a game of bluffing and betting that fans of Balderdash will love.

The rules of Skull are simple. Players have a hand of cards made up of a mix of skulls and roses. Players take it in turns to place cards from their hand face-down until one player declares they will turn a number of cards over.

When a player has declared this, they turn their declared number of cards over starting with their own. If all the cards have roses on them, they win the challenge. If at least one card has a skull, they lose the challenge and a card.

Before the declaring player turns cards over, other players can outbid them by declaring that they can turn moreover. Once a player has won two challenges, they win the game.

Skull is a simple game of bluffing and bidding. A simplified version of poker, players who love a bluffing game will adore Skull.

Inspired by Mafia and Werewolf games, The Resistance pits players with hidden identities against each other to either root each other out or destroy the mission.

Designed by Don Eskridge for 5-10 players, The Resistance is a fun party game that anyone after bluffing games like Balderdash is sure to enjoy.

The original bluffing game, Liar’s Dice is a simple dice game in which players secretly and simultaneously roll five dice in a cup. Then each player takes a turn to ‘bet’ on the minimum number of dice showing a certain number around the table (e.g. ‘three 5s’).

Also known as Call My Bluff or Perudo, Liar’s Dice can be played with 2-6 players in less than 30 minutes. You can play it with your own dice, but buying a Liar’s Dice set with its own cups and even a playing mat for special games will make this classic betting game even better.

Sérgio Halaban and André Zatz’s 3-5 player board game, Sheriff of Nottingham is an excellent card game for anyone looking for bluffing games similar to Balderdash.

Once you’ve collected sets, you hand your bag over to the sheriff and tell him how many cards you have inside and claim that they are all legal (even if they aren’t). The sheriff then decides whether or not to open your bag or hand it back.

You only score points for your goods if you get your bag back. If the sheriff takes your bag and there are illegal or undeclared goods inside, you score nothing.

But if the sheriff takes your bag and there are no illegal goods, he has to pay a large fine (of points). The player with the most points at the end of the game wins.

Cockroach Poker is a simple, 2-6 player card game that fans of Balderdash’s bluffing mechanics are sure to love. Designed by Jacques Zeimet, Cockroach Poker is fast-paced, easy to learn, and great for families or as a filler game on board game nights.

The Cockroach Poker deck is made up of 8 sets of bugs. Cards are shuffled and dealt out to players. On your turn, you place a card face down and slide it to another player, saying what type of card it is (or lying).

The receiving player can declare if the type of card said is true or false and flip over the card. If they’re wrong, the card stays face up in front of them.

If they’re right, the giving player puts it face up in front of them. Alternatively, the receiving player can peek at the card and slide it to someone else and say a type of card again.

Players compete to get four of the same type of critter in front of them and the first player to do so wins.

Bruno Faidutti’s party game, Mascarade, is perfect for gamers after bluffing card games like Balderdash. In this speedy, 2-13 player game, players are each dealt a face-up character card and given a few seconds to memorize who is who.

Each player is given 6 coins and during a round can declare a character and use their ability to try to gain more coins. If another player reveals that character, you cannot use that ability and you lose a coin. You can also peek at your own card or swap cards with another player.

The aim of Mascarade is to get to 13 coins first. Like Balderdash, Mascarade is a simple yet effective bluffing game that everyone can enjoy.

Your love of bluffing in board games like Balderdash maybe means you secretly want to be a mobster who lies for a living. If that sounds like you, Cash n Guns is the game for you.

In this fast-paced, 4-6 player game, designed by Ludovic Maublanc, you’ll load a foam gun with either shots or blanks using cards and then point it at other players. Players must then decide, based on how many guns are pointing at them, if they’re going to stick or chicken out.

Once some players have chickened out, the others make their shot. Any players who didn’t chicken out and aren’t wounded by the end of the round split the cash. Once all rounds are played, the player with the most cash wins.

If you want a fun bluffing game like Balderdash, Oleksandr Nevskiy’s Detective Club could be your next addiction.

In this 4-8 player board game, each player has a hand of cards with strange artwork on them in a similar style to games like Mysterium.

One player is a clue giver and decides on a word that matches two of their cards. They put one card, write the clue down on all but one of the notebooks they have, shuffle these and hand them out.

This means that one player does not have the clue. Players then take it in turns to put down cards matching the clue and then the clue giver announces the word. The players must then explain why they chose the cards they did for that word and then players bet on who was lying as they didn’t know the word.

Points are scored for effectively lying and for catching out the liar. The player with the most points at the end of the game wins.

Balderdash is a classic bluffing game. It may have qualities of a word game like Scrabble or Boggle, but it’s ultimately all about being good at lying. If you like games similar to Balderdash, you probably love bluffing to your fellow gamers.

This list of bluffing games has something for everyone. From simple dice-rolling games to elaborate hidden identity board games, whatever reason you love bluffing, you’ll enjoy all of these games.

Are you looking for games that are like Balderdash? Have any recommendations that didn’t make the list? Let us know in the comments! 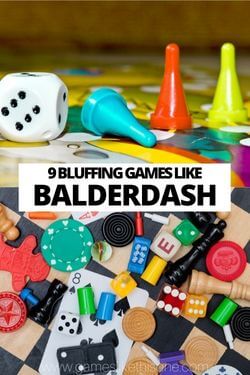