Azul is a relatively newer game, coming out in 2017 but has fast become a favourite. It takes up space on the shelves of both board game enthusiasts and latent hobbyists because of it’s novice-friendly complexity level and it’s stellar production value.

Taking inspiration from a tale about the Spanish King Manuel I, it has a Portuguese style to the tile pieces that are just lovely to look at. Even more so as the board fills up in later rounds. And that makes it players lean into their role as stonemasons trying to create an aesthetically pleasing wall while just placing procedurally in the hopes of winning.

This is a game that feels great to play and looks great added to your collection.

The first on this list of games like Azul is Sagrada and it’s especially close to Stained Glass. However, this one tasks its’ players to use d6s in creating beautiful stain-glass windows by placing them into open slots on their boards and trying to complete their win conditions.

Every game will be slightly different because players will be given random boards to begin with that each have their own individual rules and they can respond to these by designing a number of different patterns.

It also takes from history to inspire their beauty and while the game can be played with up to four players it also has a Solo mode and either way it proves to be an enjoyable, challenging time.

Patchwork is a board game that simultaneously reminds you of your youthful days playing Tetris and of helping grandma out at the holidays.

Two players will be working against one another to create the best quilt. In this game, like Azul, the objective is to lay tiles from a common pool on the personal boards of each player. They have to pay for intricate Pattern Patches with Buttons and Time, which will deplete their resources and move their Player Piece forward on the Time Track.

So watch out! But don’t worry too much. The game is easy to play and the quirky setting makes it a lovely time for friends who have an eye out for something a little bit different.

Next up is Hanabi. This is a fun cooperative game where your goal is to place all five suits in chronological number order. The twist? Players can’t look at their own hand.

Two to five players will all hold their hand of cards faced outwards to the rest of the table and then use clues derived from the others to decide what to play. Players can only share one clue, colour or number, each time they decide to give information so it will take the work of the whole group to allow each player to “see” their cards more clearly.

Being completely at the will of the others at your table is novel and tension can rise when players have different things they think you need to know.

Tsuro is a quick-running game that’s not overly complex to understand but high on strategy and can drive a really competitive table totally nuts.

Two to eight players each have a pawn that they’re trying to keep safe and will place tiles on the table each turn to drive themselves and opponents around the board. If pawns are forced off the table or into a collision with another player they lose and the last remaining player wins.

This game is similar to Azul in that the board itself and the pawn pieces are really beautifully designed and great fun to play, they provide a cultured aesthetic for you to fall deep into your thoughts as you pick off players one by one.

So I would suggest you don’t go chucking it across the room. But at the end of the day, I wouldn’t blame you. This one’s a friendship breaker.

The Isle of Cats

This is another great addition to this list of games like Azul. In this one, however, the tiles you’ll be placing are all manner of cat. Long cats, bendy cats but most importantly they’re all cute cats.

One to four players have decided to rescue the poor occupants of The Isle of Cats which evil Lord Vesh has promised to pillage. They will play cards to fill their ships up with felines and treasure and try to skedaddle away before that rotten scallywag arrives.

Each player also has their own unique tasks to accomplish and without a proper eye on the situation rats can end up being a problem on the ship however the imminent danger doesn’t make this any less of a charming game.

Celestia is a game that sets two to six players floating across the skies on an airship together and asks them whether they want to trust each other or not.

Each space forward players travel on the ship, they’ll be able to gain more treasure but getting out early when the danger seems too fierce is the only way to avoid potentially crashing and receiving no treasure whatsoever.

Another on this list of games like Azul in that it relies on pattern matching and is a little bit unique is Potion Explosion. In this, players are in alchemy class together mixing potions and to do so they need to collect the marbles in the dispensary, which act as components, and place them in the jars they have appropriately.

The taking of marbles can become very fraught, however. Marbles of matching colours that run into each other once a player has taken their pick also end up in their hand so they have to choose wisely.

This could mean they end up with all the ingredients they need in one go, speeding up the process for them against their classmate. Or it could leave them at the bottom of the class.

Back to tiles now for games like Azul, we have a mah-jong style game called Dragon Castle. Two to four players will set up the board with its castle in the centre and take from it to build one of their own.

As players create sets in their castles, use certain cards, build shrines on their land or follow their win conditions they’ll score points. The game is harder to grasp than a lot on the list but a lovely jump for people looking for more of a challenge.

Finally, Onitama is a two-player board game similar to Azul in that is also uses a historic setting. This game uses the Mountains of Ancient Japan to give flavour to the battle taking place on the board.

Players each control five pieces, four pawns and one master whose movements are dictated by randomly drawn Movement Cards. They choose from the two cards that are on display each turn for them and place something new to take its’ place which can then be used by their opponents.

They will both try to “take” pawns and the master pieces from their opponent to win or try to take over their opponent’s Shrine with their own piece. The game becomes tense quickly and can be a heated one for friends looking to play something exciting.

If you’re really hankering for board games similar to Azul then you could do a lot worse than just picking up one of its sister titles.

Summer Pavilion chooses to go with another story centring King Manuel I, who actually did plan the construction of a pavilion in his court but died before it’s creation, and this time uses colourful diamond-shaped tile pieces.

Similiarly to the original Azul, it is also a two to four-player games, but is unique enough to allow for a whole new gaming experience. They will definitely harken back to the parts of Azul that made you love the game so much in the first place, play wise.

There is so much on this list that you have to try out. I really couldn’t love these games more if I tried. Azul is a universally loved game but looking here, it might have a bit of competition. Whether it’s the beautiful look of the game that enticed you, the pattern-matching perfectionism or the simple ruleset there is definitely something on this page for you.

And remember when you’re picking up a colourful tile-laying treat for yourself or someone you know deserves a treat, use the links from this page to do it. Don’t wait, buy your new favourite board game today.

Are you looking for more books like Azul? Have any recommendations that didn’t make the list? Let us know in the comments! 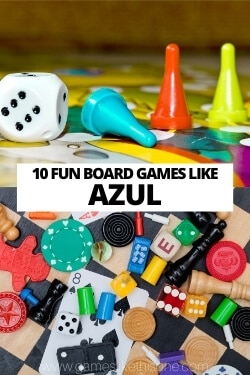