Word games like Boggle are popular with kids and adults alike. Word games are great for kids learning to spell and increase their vocabulary and fun for adults who love language and spotting long and unusual words.

If you’re after board games that are similar to Boggle, look no further. We’ve got ten fun word games for all ages right here.

It’s an obvious choice, but an unavoidable one. First released in 1948 and designed by Alfred Mosher Butts, Scrabble is a classic for a reason and is perfect for anyone looking for board games like Boggle.

In this 2-4 player board game, players draw seven letter tiles and must use these to make letters on the board. The commonality of a letter determines how highly it scores – so X scores higher than E – and may also score depending on where it’s placed on the board.

Players can also use elements of other words that their opponents have played, so some tactics are required. That said, Scrabble can be as easy or as difficult as you want, which is why it’s so enduringly popular with kids and adults alike.

If you’re after games like Boggle, Bananagrams could be your new favourite. Designed by Rena and Abe Nathanson for 1-8 players, this speedy board game is great for families and friends, suitable for players aged 7+.

Bananagrams has a banana-shaped pouch containing 144 letter tiles. Each player starts with 21 face-down tiles and turns these over at the same time. The players then start making crossword-style grids of words.

Dabble is a simple yet challenging word game that is lots of fun for adults or kids looking for games similar to Boggle. This 2-4 player word game is designed by George Weiss and is suitable for gamers aged 10 and above.

In Dabble, each player receives 20 letter tiles and must create a 2-, 3-, 4-, 5-, and 6-letter word in five minutes. Similarly to Scrabble, points are scored based on the commonality of the letters used.

The first player to complete all five words will also score the points from any letters their opponents weren’t able to use.

Dabble can be played over as many rounds as the players like. This fast-paced game is lots of fun for families and board gamers alike and perfect for Boggle fans.

If you’re a fan of word games like Boggle, Rewordable is perfect for you. This 2-8 player card game is designed by Allison Parrish, Adam Simon, and Tim Szetela and can be played by anyone aged 8 and above.

Rewordable has a 120-card deck made up of cards with one, two, or three letters on them. The two- and three-letter cards are common letter combinations in the English language such as ‘er’ and ‘str’ and so on.

Players draw a hand of cards and take turns to make words for their ‘lexicon’ using at least one card from their hand. They can steal words already on the table – for example, if one player makes ‘strong’ the next player steal it and add ‘er’ from their hand to make ‘stronger’.

As the game goes on, ‘Rewordable’ tokens move around the table that allow players to set goals and get bonuses each turn. When the last card is drawn and everyone else takes their final turn, players score based on tokens and the number of letters in their lexicon.

Upwords is another word game classic that anyone hankering for games similar to Boggle is sure to love. Designed by Elliot Rudell for 2-4 players and first released in 1982, this 3D word game is great for families and adult games.

Players each get 7 letter tiles and must make words on their personal 10 x 10 board with them. Where this game differs from games like Boggle and Scrabble is that letters can be stacked up to five stacks high to create new words.

Players score points per tile based on what letter combinations they use and how highly stacked their words are. If you love letter games like Boggle, Upwords is a classic you should add to your collection.

Martin Russocki’s JABUKA is a fast-paced, 2-8 player word game suitable for players aged 8 and above. If you need a new game similar to Boggle, JABUKA is a quirky take on the classic word game.

The beans are emptied from their bag onto the table so there is a mixture of face-up and face-down beans. Players then have several options to get beans during the game.

A player can call out a word they can see and players must use the pile of beans to make this word if they can. Players can also steal an opponent’s beans by manipulating them to make new words, such as rotating a bean, adding another bean, or rearranging the beans.

During the game, a player can also declare ‘flip’ to flip over some of the face-down beans. When the last face-down beans are flipped, one more action can be taken before the game ends and the player with the most beans wins.

One of the best games like Boggle out there is Marsha J. Falco’s 1-8 player card game, Quiddler.

Every card in this game has one or two letters on it and a point value. Quiddler lasts eight rounds, players are dealt three cards in the first round, four cards in the second, five in the third, and so on.

On their turn, players draw a card from the draw pile and discard one card. This goes on until one player is ready to play all their cards as words made up of two or more cards.

Once this happens, the other players must make as many words as possible out of their hand. Points are scored and the deck is reshuffled and redrawn for the next round.

One Up! is a fun, travel-friendly, two-player game that fans of Boggle are sure to enjoy. Players flip tiles one at a time from a pile of face-down letter tiles. Whenever you can spot a word that can be formed, call it out and add those tiles to your score area.

Once players begin adding words to their score area, other players can also poach these words. For example, if a player has ‘rat’ in their score are and there is a ‘c’ in the draw pile, their opponent could take the ‘c’ and ‘rat’ to make ‘cart’.

When no more words can be formed, players score points for the words in their score area. Each word is worth one point per letter minus one. The player with the most points wins.

Word A Round is a fun game for kids aged 9+ and families that’s designed for 2+ players.

Word A Round has 100 circular cards each with three circular words on it – one in a black circle, one in a blue, and one in a red.

The cards are stacked with their words facing up. The first round players must read the word in the black circle. The difficulty is figuring out where the word starts.

Once the first player is able to call out the word, they get that card and flip it over to reveal which colour circle the players must read on the next card. The first player to get 10 cards wins.

Doruk Kicikoglu and Big Potato’s P for Pizza is a great word game for anyone after games like Boggle. Suitable for 2-4 players and gamers aged 8+, P for Pizza is a speedy, think-on-your-feet game that both kids and adults will love.

In P for Pizza, each player is trying to build a triangular pizza slice made from triangle cards they can win each round. Each triangle card has three letters on one side and three categories on the other. Categories might include ‘a five letter word’, ‘a type of makeup’, or ‘a board game’.

Whether you love spelling out long and complicated words, spotting unusual letter combinations or you want a new wordy game for your kids, this list of fun word games has something for everyone.

Are you looking for more games similiar to Boggle? Have any recommendations that didn’t make the list? Let us know in the comments! 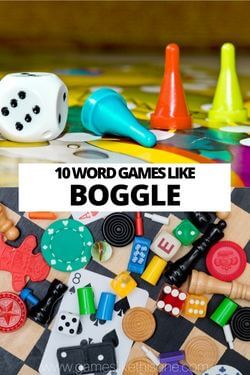