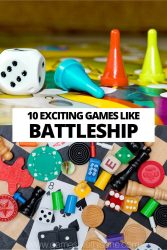 Battleship is the classic, two-player strategy game. You might have played it as a child or even with your kids now, so it’s no surprise that you are looking for games like Battleship.

Thought to have first been played by soldiers during World War I, Battleship was originally played with pen and paper until it was released as a board game in 1967. Pen and paper were replaced with pegboards and miniature ships and Battleship has been a staple in after-school clubs and family game nights ever since.

Whether you are looking for board games like Battleship for your kids or simply loved this game growing up and are looking for fun alternatives, this list of 10 games will offer plenty of inspiration.

Ever wish you could play games similar to Battleship but with more players? Decrypto is a fun party game for 3-8 players in which two teams will compete to crack their opponents’ codes. Designed by Thomas Dagenais-Lespérance, this code-cracking game is addictive and perfect for casual game nights.

Each team has 4 keyword cards with corresponding numbers from 1-4 – such as ‘pig’ for 1. Then, a clue-giver from each team will draw a card with a 3-digit code and must give out hints for the code based on their team’s keywords – for example, for 1 the clue-giver could say ‘bacon’.

And whilst the other team is deciphering these codes, your team will try to intercept the clues and, from round two onwards, have the chance to decipher your opponents’ codes before they do.

Decrypto is delightfully simple and fun and, like Battleship, requires discovering secret information from your opponent.

If you enjoy strategically locating secret objects in Battleship, you will love Forbidden Island. This co-operative, 2-4 player game is designed by Matt Leacock and is great for gamers and families looking for all the excitement of Battleship whilst working as a team.

Players take on the role of adventurers who are tasked with retrieving four precious artefacts from a sinking island. A helicopter will drop you onto the island and you must move across the tiled board to collect the treasures.

But the island is increasingly sinking beneath the ocean and tiles will flip over as they begin to be submerged. Players must work together to keep the island from sinking before they can collect the artefacts and escape.

Forbidden Island will be as much fun for families and it is for regular gamers, as it offers teamwork, adventure, and plenty of tension.

Naval Battle is a board game for kids that is perfect if you are looking for more 2-player games like Battleship.

Naval Battle is a light-weight, family game described by the makers, Bombat Game, as ‘Real Sea Chess for your Kids’. Each player has four ships, a battleship, a galleon, a frigate, and a brig, each with its own strengths and weaknesses.

Players take it in turns to move around the board and attack their opponent with the goal either to sink their opponent’s battleship or capture their base. Like Battleship, Naval Battle is played with miniature ships, plus the 2-sided board gives the game extra replayability.

If you have young kids who love Battleship, Naval Battle should be your next board game.

Captain Sonar offers all the fun of Battleship but with more players and submarines! Roberto Fraga and Yohan Lemonnier’s 2-8 player strategy game has players working in teams as they try to sink their opponents’ subs.

Players will have different roles on the submarine – the captain, the chief mate, the radio operator, and the engineer. Working together, your team will manoeuvre your submarine, use its sonar to discover the location of the other sub, and prepare torpedoes for when you launch your attack.

Multiple maps and the option to play either turn-by-turn or simultaneously gives Captain Sonar even more replayability and varying difficulty levels. If you’re looking for games like Battleship for larger groups and older kids (14+), Captain Sonar is perfect.

And if you have younger kids or want something simpler, Fraga and Lemonnier’s Sonar is a stripped-back version of the game.

You might enjoy board games like Battleship because you love the cat-and-mouse hiding and hunting elements of the game. If so, Specter Ops is an intense, sci-fi strategy game that is a fantastic step-up from Battleship.

Specter Ops is for 2-5 players and is designed by Emerson Matsuuchi. One player is a special agent who is tasked with sneaking into a top-secret facility, stealing three of four special items, and making it out alive. The other players are hunters who must work together to capture the infiltrator before they escape with the items.

Specter Ops is a great combination of stealth, deduction, and strategy. Players will also love the amazing art and miniatures designed by Matsuuchi along with Steven Hamilton, Chad Hoverter, and David Richards.

Scotland Yard is a classic family board game that was first released in 1983. Named after the London Metropolitan Police quarters, Scotland Yard pits one player against the rest. This player is Mr X, a criminal who is stealthily moving around London, rarely appearing in plain sight.

The other players are London police trying to track down and capture Mr X. The police must use various transport methods across London, such as taxis, the Underground, buses, and ferries.

Like Specter Ops, Scotland Yard is an intense, cat-and-mouse game that anyone looking for games similar to Battleship will love.

Escape from the Aliens in Outer Space

If you are looking for fun board games similar to Battleship, Escape from the Aliens in Outer Space could be your new favourite. Designed by Mario Porpora, Pietro Righi Riva, Luca Francesco Rossi, and Nicolò Tedeschi, this 2-8 player board game is filled with hidden movement, bluffing, and secrecy.

Players are given secret roles as either aliens or humans. The humans are attempting to reach the escape pods, picking up survival items along the way, whilst the aliens, trying to keep their identity secret, will track down the humans and eat them!

Escape from the Aliens in Outer Space is an excellent board game that combines social deduction with the strategic manoeuvres of games like Battleship.

Telepathy is a rewarding, puzzle-solving deduction game designed by Derek Chinn. In this 2-4 player game, players are attempting to locate secret symbols on their opponents’ grids – much like Battleship. Telepathy, however, offers a bit more strategy than Battleship.

Players take it in turns to guess the location of certain symbols, with their opponents giving ‘yes’ or ‘no’ answers. This allows you to gradually figure out where symbols are located on your opponents’ grids and you will race to uncover them before they locate yours.

Telepathy is a great game for families who are fans of Battleship and are looking for more abstract, puzzle-solvers for game nights.

The gameboard is a battlefield and each player will attempt to capture their opponent’s flag whilst protecting their own.

Like Battleship, Stratego is a grid-based game that involves discovering the secret locations of your opponent and using your memory to outwit them.

If you’re after board games similar to Battleship, Stop Thief is a fantastic family game that will have you vying against each other to track down a thief with a bounty on his head.

Robert Doyle’s Stop Thief was originally published in 1979 and came with a chunky electronic ‘crime scanner’ for discovering the thief’s whereabouts. In Rob Daviau, Robert Doyle, and Justin D. Jacobson’s 2017 reboot of the game, however, the ‘crime scanner’ has been replaced with a phone app.

In Stop Thief, 1-4 players will listen to clues through the app to find the thief and use their unique card deck to move around the board and receive private tips. Players can either work together to capture the thief or competitively.

Regular gamers and families who enjoy app-linked board games with lots of strategy and secrecy will find plenty to love in Stop Thief!

Board games like Battleship are hugely popular with kids and families. And many board-game-lovers have fond memories of this strategic classic. Whether it is hunting down your opponent, uncovering secret locations, or deciphering clues, our list offers exciting board games for all ages and experience levels.

If you are looking for an alternative on family game nights or after a new, strategy-based game for your collection, there is plenty of tactics, secrecy, and strategy on offer in each of these board games.

Are you searching for more games similiar to Battleship? Have any recommendations that didn’t make the list? Let us know in the comments! 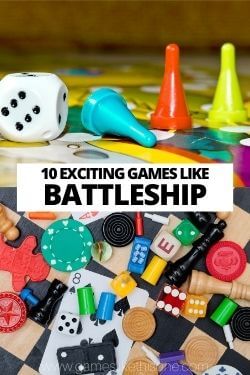