Are you searching for more board games like Munchkin?

Munchkin has been a staple “starter” board game since its inception in 2001. It’s the perfect initiation to get people who might otherwise not be up for playing a tabletop game to dip their toes. It’s not just newbie friendly though.

Either because of its easy-to-pick-up playstyle, its inability to take itself too seriously or it’s consistently fresh feel, every board game veteran I know is always up for getting the box back out again and having a round of Munchkin. It’s that versatility across the board that has led to the game sweeping a number of awards and spawning record-breaking amounts of new versions year after year.

And it’s that, that has led you to come looking for board games similar to Munchkin.

Lord of the Fries

To begin with, we won’t be straying far for card games like Munchkin, we’ll actually be talking about one also produced by Steven Jackson games. If you want something that will make you laugh just as much as Munchkin does then you’re going to have to try out Lord of the Fries.

This three to eight-player game lets the players take on the role of zombie fry cooks and try to fill the odd orders that their menu hosts. Orders are chosen by a roll of the dice, or by ‘calls’, and all players across the table fight to fill them with the ingredients they have been dealt from the card deck.

The aim of the game is to use up all these greasy ingredients and leave the round with nothing left in your hand. It’s suitably absurd and quite fast-paced so is a fun one for fans of Munchkin.

Second on this list of games like Munchkin comes Illuminati: Second Edition, another Steven Jackson special, and this one is all about world domination. This two- to eight-person game lets players build conspiracy chains connecting their secret society to true power and is quite easy to grasp but hilariously bizarre to watch unfold.

You’re going to want to explore the updated edition for this one, however, it has only changed for the better. Updating the content as well as the mechanics to help players sink their shadowy claws into a truly Twenty-First Century world, they’ve plumbed the depths of pop politics to pimp this new game out with all the information it needs to remain current. They even have Furries.

You’re definitely going to want to pick this one up.

If you were looking for more of an adventurous setting than The Red Dragon Inn almost has what you’re asking for.

Two to four players make up a party of hardened warriors looking to rock the night away after a day of dungeoneering and they won’t stop until closing time. The forces players are battling in this game are as much themselves as each other.

They must try to outlast the others by not having their Fortitude or Gold sink too low and not have their Alcohol Content reach too high.

It’s a raucous and silly game like Munchkin with many expansions that carry their own characters, with unique character decks, to pick up play with and keep the game fresh.

If you were missing the fight from the earlier suggestions however than maybe consider Epic Spell Wars of the Battle Wizards: Duel at Mt. Skullzfyre. The game might have a complex name but don’t worry, as you’d expect from a card game like Munchkin, it plays very intuitively.

Two to six players will be one of the powerful and perplexing Battle Wizards trying to overpower the others at the table. This will be with completed spells, made by placing a number of different cards down, by collecting treasures and just wearing everyone else down.

Players will need to win two of these battle royales to take the whole game. And don’t worry, players with the bad luck to die early on will pick up bonuses each turn they have to sit through before the next round brings them a new chance to prove their stuff.

Next for games like Munchkin we have Cutthroat Caverns. This one is all about monster killing, so back to the basics!

Each monster card will have special abilities and three to six players will have to lean on one another to get the job done. In this game, the HP of all monsters is multiplied by the number of players who began the game, even if it’s pulled after one or more of them has already died.

So allowing members of your party to become overwhelmed by attacks isn’t always the way to go. There could be some bigger bruiser waiting in the deck for you that you’d like a full party to tackle.

Behind the cooperative bloodsport, however, everyone will also be trying to land that final killing blow and get the Prestige all the monsters give out for themselves.

If you’ve never heard of Card Wars before then I would suggest you watch the Adventure Time episode about it. It’s not at all helpful with learning the rules of the card game, I just really like that episode.

The corn-and-pig-themed play may seem a little bit less random if you have seen it, however, this one is great if you’re looking for a card game like Munchkin.

Two players will aim to reduce their opponent’s Hit Points from 25 to 0 and become the “Cool Guy”/Winner. To do that players will summon Creatures into different lanes and choose whether or not to FLOOP them and set off their special abilities or just straight-up attack their opponents’ creatures or personal HP.

While the games can come fast and hard, there is a lot of room to turn against one another and really disrupt the flow of the game to good and disastrous results here.

The Order of the Stick: Adventure Game

Another board game like Munchkin from an already established IP is The Order of the Stick: Adventure Game which gets its’ name from an amazingly successful web-comic that spawned one of the most successful Kickstarter campaigns for a board game ever seen at the time its’ release.

This game is a classic dungeon crawler as you might expect if you’re familiar with the fantastical satire of the webcomic. Two to six players will take on the roles of the main characters, all with unique powers and wants, and make their way through the dungeon. They go through destroying monsters, levelling up and finding treasure.

This game can definitely also be given new life with its expansions so look out for supplements like The Shortening and Sticky Shticks which make the game much shorter.

The Binding of Isaac is another Kickstarter baby born from a video game this time and proves a slightly more fleshed out and much darker game like Munchkin.

Two to four players take on characters from the game who will use loot and items to try and kill monsters hoping to collect souls that they might drop. When a player ends their turn with 4 souls they are the winner.

Just like in Munchkin, there is a lot of room for “stealing” treasures and forcing others to trip up in their quest for the souls. Everyone around the table will be very heavily affected by the other’s actions despite them not always being attacks.

So get ready to make some enemies out of those friends of yours.

Coming back away from the fantasy now, Lost Cities is a game that sets two players head-to-head as intrepid archaeologists exploring ruinous ancient cities across the world.

Players will have to choose which of these sites they want to excavate and then will try to place cards in a particular order to rack up financial bonuses. Players will play colour-coded cards, trade cards away into the pooled discard piles and wager on their own success for three rounds.

In the end, they’ll be balancing the books and seeing if there’s been any profit made with the cards they’ve placed. Just like in real life, this one can end in the negative so watch out!

Selfish: Space Edition is a board game similar to Munchkin in that it thrives on the two to five players being ruthlessly selfish. Everyone at the table will take on the role of untethered astronauts writhing in the depths of space.

Of course, everyone wants to make it back to the ship, but only one person can. They’ll be fighting wormholes, asteroid fields, laser blasts and the other astronauts to make it there. Players are working towards their goal and managing a hand of Oxygen and Action cards to either help move themselves forward or disadvantage others.

Players should be wary though, they’ll be revealing a space card each time they move and nothing in this game is on your side.

This list had a number of games that are pretty out there, which is what you might expect looking at board games like Munchkin. That game started as a fantasy roleplaying satire but with each new version, it has taken shots at sci-fi, horror, crime procedurals, video games, children’s cartoons, adult cartoons and much, much more.

Pick up one of these games and bring some of that weird wackiness to your table. You will not regret having that kind of energy in the group and you’ll make some great memories with it.

Are you searching for more games like Munchkin? Have any recommendations that didn’t make the list? Let us know in the comments! 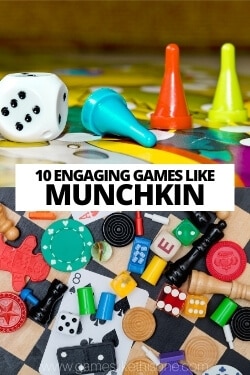