Everyone loves a good mystery and nowadays there is no shortage of games like Mansions of Madness to choose from. If you’re looking for a cooperative, horror investigation to take you from Saw to Sherlock and everywhere in between, then you might have to wade through a few duds to get to the diamonds.

Or you might have had to if not for this article. Instead, I’m going to take you through ten board games like Mansions of Madness that you need to pick up for your shelf today. Whatever you like to take from a night around the proverbial campfire, there is definitely going to be something in this list for you. So just get ready to get scared.

If you’re looking for a board game similar to Mansions of Madness that will raise the hairs on the back of your neck and also get your hand reaching for the magnifying glass then Elder Sign is a perfect choice.

This co-op dice game can be played with one to eight players who will make their way through a museum’s antiquated selection of curios and occult implements to find a series of eldritch symbols.

They need to find these to close the portal that has been opened inside the museum leading to a terrifying alternate dimension and will have to overcome Adventures and defeat the Ancient One to succeed.

This one comes from the Arkham Horrors own creators so is an especially lovely addition to a collector that already owns anything from their series.

Which leads me on to another off-shoot from Arkham Horrors that I suggest you pick up. This game is like Mansions of Madness because of its spooky setting and mystery basis but it still remains unique from the list as a well-oiled mix between a Role-Playing and Deck Construction gaming experience.

It is a one- to two-player game initially but if you buy an extra Core Set, that bumps up to three and can be played as a Campaign game.

In the small town of Arkham, Massachusetts players will inhabit flawed characters trying to survive the horrors occurring around them using the custom deck of cards they’ve built to unravel the mysteries of the town.

Through the deck, they’ll learn of their own weaknesses and strengths as well as uncovering the truth of the unsettling Arkham itself.

Another board game similar to Mansions of Madness with a campaign option is Gloomhaven. As an optimal example of cooperative gaming and dark and dank horror-filled settings this was an easy choice to make the list.

One to four players will adventure through Gloomhaven killing all the monsters they encounter and trying to fulfil the scenarios together and then coming to an agreement on what will happen next.

This is a lot more combat-heavy than some of the other options on this list but even as a dungeon-crawler it’s in keeping with the themes and feel of Mansions of Madness enough that I would always feel comfortable suggesting it to any fans of the game.

Lovers of the first game in the Escape the Dark series will really enjoy this next instalment, Escape the Dark Sector. If what you wanted from your game like Mansions of Madness was impeccable storytelling and player cooperation then I’d say there probably aren’t that many better choices out there.

One to four Players find themselves confined to a detention block on a space station that has impounded their starship and has to utilise space-age weaponry and gear to get themselves back home.

Along the way, they will meet all manner of horrific and daunting complications and must do anything they can to keep every player alive or forfeit the game. This added tension piles on the chills and makes for an extremely team-motivated table.

Similar to the last choice, we have another escape game here but a little quirkier than your usual Dungeon-Break story.

In Mice and Mystics, one to four players will work cooperatively to get out of a castle. They have all been turned to mice to hinder them, but these heroes laugh at the challenge and in turn take on rat guards, cockroaches and the castle’s resident Kitty along with the ever-present perils of a crumbly old castle.

The Mice Heroes will use abilities gained by collecting crumbs of cheese to fight and try to survive the terrifying life of a rodent in constant danger. And if they start to like the Mouse lifestyle, they can even play it as a campaign.

For this game similar to Mansions of Madness there is another level to the cooperative mystery-solving.

In Mysterium, one player will take on the role of a Ghost who has been murdered while one to six others will become Mediums who converse with them solely through Visions which are illustrated cards they will reveal that the mediums have to decipher without the Ghost ever being allowed to speak.

If the Mediums can determine who did the crime, where it took place and which weapon caused the death using only these Visions then the Ghost will recover its memory and Justice will be served.

There’s more to Mountains of Madness that makes this a game like Mansions of Madness than just the name, you can trust me on that. Like in Mysterium, this board game limits how players can communicate while they work together.

Three to five players will take on this game fashioned after H. P. Lovecraft’s novella of the same name and discover evidence of a hidden ancient civilization during their scientific expedition in the 1930s. Players will take turns being the leader and organizing the remaining players to win challenges set by the mountain’s inhospitable terrain and terrible secrets.

As characters are given more Madness Cards however they will have more limitations and rules will be put on their speech and it will become harder to work together as they begin to lose the ability to understand one another.

Another unique edition to the murders and mysteries on this list is Tragedy Looper. This board game like Mansions of Madness asks one player to be the Mastermind and run the game while the other one to three players cooperates to try and prevent a tragedy that will soon occur.

When it does inevitably happen anyway however the players are sent back in time, and now knowing a little more about the in-game characters’ roles and the tragedies at play they start working again to stop it from happening.

Players finally win when they can change the set-up of the game enough to keep the scenario peaceful and tragedy-free for a certain number of days finally breaking their loop.

Talking about all this grim gorey horror can get a little samey, so why not take advantage of one of my next two suggestions. Firstly, a game like Mansions of Madness that I love getting to bring up is Stuffed Fables.

In this cooperative action game, two to four players take on the roles of brave stuffies and protect their Child from the things that go bump in the night and hide under beds. What this game lacks in investigation, it makes up for with ingenious design and addictive gameplay.

The players will draw random dice each turn and depending on the colours they pull from the bag will be able to choose certain actions to take which is a great game mechanic for building tension and breeding teamwork in the group.

A lot of people are going to bring up Betrayal at the House on the Hill when talking about Mansions of Madness. And they’re not wrong to, either. Both are great cooperative, horror games that you wouldn’t go wrong picking up.

But today I want to bring up one of the best Betrayal supplements I’ve ever gotten my hands on and that is Scooby-Doo! Betrayal at Mystery Mansion.

For this game, three to five players take on the roles of the members of the Mystery Gang as they traverse the mansion and its grounds, picking up clues, happening upon spooky events, and even catching sight of a monster or two!

The twist comes when enough clues are collected and one player will switch sides to play the role of the monster.

This one is great nostalgic fun and uses the perfect game design of the classic game.

Already love the original version of this game? Check out our list of games like Betrayal at House on the Hill!

And that brings us to the end of my suggestions for ten games like Mansions of Madness. As I promised, there are a huge array of options on this list that should be able to scratch that horror game itch no matter the mood you’re in.

From campy goofs to slashers and right back around to Lovecraftian obscurities, there is something here I know you’ll love. So, when you’ve exhausted all the expansions and you just need a little more of that good, good spooky fun look no further than this list.

Are you searching for more games like Mansions of Madness? Have any recommendations that didn’t make the list? Let us know in the comments! 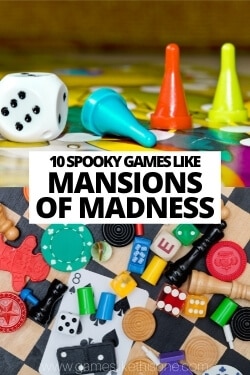