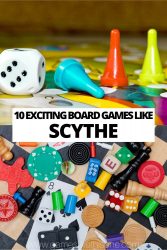 For fans of board games like Scythe, there’s no challenge too difficult to crack and no friend close enough to not stab in the back. Or at least, that’s how I play it.

Scythe mixes the setting components of Steampunk and 1920s Europa to create a game truly worth fighting over. A game that relies on countless moving parts and leaves players feeling challenged and satisfied after a few hours at the table.

So when it does feel a little played out and the box edges are starting to fray it’s a little difficult to find games that can stand up to the challenge of replacing it. If you’ve been stumped trying to do so, look no further than this list.

Civilization is the first to come to mind when I’m thinking of board games like Scythe. This game is equally complex and pits two to four players against each other as they try to make the Civilization they rule the greatest empire the world has ever known.

If you’re familiar with the video games, this game is primarily inspired by VI, or the earlier versions of the board game you will understand what to expect when you open the box. However, there are a number of impressive components that will keep players who are looking for something unique enthralled.

That includes the multiple dials that do everything from randomising barbarian drops to measuring your civilization’s technological level. As well as the evolving card format which means that you can upgrade a card before it’s used.

This is another on this list of board games similar to Scythe that asks players to fight over the board but this time it won’t be land, it will be the season in which two to five players make their battle.

Endeavour: Age of Sail is a sequel to the original Endeavour game will ask players to occupy cities and control shipping routes so that they can build up their industry, finance, culture and influence. While they try to force their opponents off the map, of course.

Though it is seven rounds this game plays relatively fast and the players will be thankful for all the time that they have. Not to mention that the board and pieces are enough to make you fall in love with the game itself.

Tapestry is about creating a truly unique and legendary culture. One to five players will take their people from the birth of humanity through to the exploration of space. If that’s even in the cards for them, that is.

Each civilization they can choose to guide will have different resources they receive and different abilities they can utilise which are further customised by the city maps they received.

The players will use their income turns to pick up resources and overturn tapestry cards and their advancement turns to use those resources to move forward on their tracks.

This board game, similarly to Scythe, takes from a number of aesthetics and ideas to populate its game. From alchemists, entertainers, inventors and historians there’s something for every mood and every possible future.

Viticulture is a great addition to this list of board games like Scythe in that it’s about worker placement and engine building but this takes it to a completely different setting.

This game whisks one to six players away to the Tuscan hills so that they can try and run the most successful vineyard. While this theme excels at creating a beautiful, calming atmosphere when the box is opened this is a game that has players jumping to action.

Those who start jobs earlier in the “season” will have an advantage over those who wait, although they can look to visitors like the judge or patron to lend a helping hand in gaining those victory points.

This is a perfect game night pick, especially paired with some Italian wine.

Agricola is another game asking you to work the land but this game like Scythe can last a while.

One to five players will begin with only a shack and their spouse able to take two actions a turn – one for each of the people on their farm. If they choose to have children they will get to do more, however, they will also have more mouths to feed.

And if you can’t feed all of them during the harvest round then you’re going to have to take a poverty card which will negatively affect your points at the end.

Trying to balance the work of the farm and the people and animals inhabiting it quickly becomes a game of deep contemplation and multiplying consequences.

In Blood Rage, two to four players will take ownership of a Viking clan from one of the nine provinces at the time of Ragnarok.

As you’d expect, these warriors aren’t looking to hide away from the end of the world though, they’ll be staring it down on their feet hoping to achieve glory and their final prize of a place in Valhalla.

The game is played over three “ages”, and in each, a new hand is drafted which will grant the clans special gifts from the gods. This could be increased strength, the aid of some mythical creature or a devious plan that will help them pillage, kill and increase their stats. Or they might be quests, asking players to achieve certain goals.

In this game like in Scythe though players won’t want to let on what they’ve chosen to do until there’s nothing their opponent can do to stop it.

Charterstone is a worker placement campaign game that will let one to six players each create a charter for the new village that the Forever King has requested be built.

They will come back to this campaign over a series of twelve games. As the players build out and populate their village they will start placing permanent building stickers which will become action spaces for every player to use, therefore building the board collaboratively.

The reputation they build for their new homes and the victory points they collect along the way will show the winner, or winners, of this epic.

This board game, like Scythe, isn’t what I would call simple but it is definitely something great to start with a group who are looking for a challenge, or someone who wants to upgrade their solo game nights.

If you were ever a child of any kind, you probably loved dinosaurs at least a little bit at some point. That’s what makes Dinosaur Island a great one to pull out for friends.

For this game like Scythe, why not try your hand at what Hammond failed to do and keep these tourists safe?

One to four players will work their way through a number of phases, splitting up turns so that collecting DNA to create dinosaurs, buying items and workers for their park, making dinos and dealing with park visitors are all going to be handled separately.

Forethought and planning are what will win this game but the players who just love the colourful box and the Jurassic Park nostalgia are more than welcome to play as well. That’s just more food for the dinos.

Spirit Island is an absolutely beautiful game that has another exciting setting, it puts one to four players in the shoes of an island spirit trying to protect their land from disruptive settlers.

Wiping absolutely all the invader pieces off the board is the only way to keep the island safe and if they can create some fear from the destruction and chaos they’re wreaking than more of the enemy will flee of their own accord.

In this game, all players will be working together to try to achieve their goal instead of fighting amongst each other however each spirit will be organising its attacks in its own controlled area while fighting off the menace.

The players’ spirits will work off of one another in different ways depending on the combination you have on the board so there are infinite possibilities for varied games with Spirit Island.

Produced by the same company, this game asks one to six players to adventure for the Kingdom of Pomme.

Players will be trying to earn 4 trophies before anyone else. To do so, they will collect gems, apples, friendship and magic spells and use those to power up their actions, complete quests and make deliveries to Castle Everfree. It can’t be overstated how cute this game is but it also plays beautifully.

As a much less complex game than Scythe, it is more than suitable for the 8+ age rating but it doesn’t baby you either. It asks players to strategize and work hard to win their pie fights.

And that our was ten board games like Scythe. You’ve got a little bit of everything in this one; Vikings, vineyards and vengeful spirits.

So next time you’re itching for an area management game or an engine-building conquest title that’s a little different come back to this list. I know that any of the games on it will not leave you disappointed.

Are you searching for more games like Scythe? Have any recommendations that didn’t make the list? Let us know in the comments! 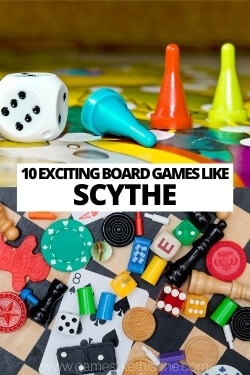