Searching for board games like Terraforming Mars? It may come as no surprise that many are hooked on this epic, sci-fi game. In Jacob Fryxelius’ Terraforming Mars, players take on the role of competing CEOs in the 2400s. Humanity is exploring, populating, and, you guessed it, terraforming Mars.

If you enjoy the space exploration and planet-settling themes of Terraforming Mars, you’ll find all of this in a smaller box in Pocket Mars.

This 1-4 player micro-game, designed by Michał Jagodziński, is a quick card game and the perfect game to open or end a game night. Players are architects tasked with developing Mars’ infrastructure and populating the red planet.

Like Terraforming Mars, the meat of the game’s strategy is in playing project cards from your hand. As you build you will start to ship people from earth to Mars, and whoever has most successfully populated their buildings on Mars will win!

Pocket Mars is quick, portable, and even has a solo mode, making it a great game if you’re looking for a lighter alternative to Terraforming Mars.

1-4 players are the first humans to reach Mars and must work together to survive on the planet, dealing with several different scenarios of increasing difficulty. First Martians also use an integrated app to generate events on the hostile planet.

With a breaking down spaceship and a dangerous environment, players will fight against the clock to ensure their mission is a success. Combining dice-rolling with a modular board, First Martians is a challenging co-operative game – and it can also be played as a solo game.

Euphoria: Build a Better Dystopia, designed by Jamey Stegmaier and Alan Stone, is a 2-6 player board game in which players will attempt to establish authority over the dystopian city of Euphoria.

If you’re looking for sci-fi board games like Terraforming Mars that let you build a futuristic city, Euphoria is a fantastic dice-roller that offers a rich world and a race to the finish.

Players lead a team of workers (dice) and recruits (cards) and over the course of the game, you will build alliances, construct markets, dig tunnels beneath the city, and fulfil secret missions. Your workers have only ever known this dystopia, but their awareness of the world they live in, and that perhaps something better came before, might lead them to desert you.

And outside of the city live the Wastelanders who will battle against Euphoria and spread knowledge of the world that existed before.

Balancing the skills of your workers with their increasing knowledge is key to winning this game, making Euphoria a unique and rewarding board game that will find a regular spot at games night.

Designed by Friedemann Friese, Power Grid has 2-6 players take on the role of power suppliers vying for control of the energy market. The aim is to supply power to the most cities by bidding on newly built power plants and acquiring raw materials such as coal and uranium. As power plants are developed, more sustainable routes open up too.

Power Grid is a great game for players who enjoy economic games in which they must balance resource production, research, and finding the cheapest modes of production.

Based on Frank Herbert’s epic 1965 sci-fi novel, Dune, Dune the board game is an exciting, thematic sci-fi game in which 2-6 players battle for control of the planet Dune.

Each player controls a noble family, guild, or religion who are based on a planet that is the sole source of one valuable resource. The most valuable resource in the universe, however, is melange, a strange spice found only on the planet Dune, in Arrakis.

Designed by Bill Eberle, Jack Kittredge, and Peter Olotka and with beautiful art by Ilya Baranovsky, Dune is a political game of bluffing and making secret alliances.

Players looking for games like Terraforming Mars will find plenty to love in Dune and fans of the book will enjoy this faithful adaptation of Herbert’s classic story.

Jens Drögemüller and Helge Ostertag’s Gaia Project is the sci-fi sequel to the popular board game, Terra Mystica. If you love the modular board and space exploration theme of Terraforming Mars, Gaia Project could be your new favourite.

1-4 players take leadership of one of 14 different factions living across seven different planets. Each faction is bound to the environment of its home planet, so in order to take over other planets, you must terraform them to your own environment and prevent your competitors from doing the same.

You will build up your faction’s skills in terraforming, navigation, artificial intelligence, and scientific research. By developing your factions, making alliances, and taking over planets, your faction will work towards domination of this solar system.

The earth has over-populated. But rather than looking for viable new homes in space, in Underwater Cities humanity will expand into the oceans instead.

This 1-4 player board game, designed by Vladimír Suchý, is perfect for anyone looking for games like Terraforming Mars. Players are the world’s top scientists and are tasked with establishing liveable cities deep on the floors of the sea.

Players use their hand of cards and place workers to generate resources, build underwater city domes, dig tunnels deep beneath the seabed, and develop underwater technologies from farming to desalination.

This nautical alternative to Terraforming Mars is a fun take on the futuristic, city-builder!

Games like Catan brought board-gaming to the masses and it is thanks to these hugely popular games that we have even richer, more elaborate board games like Terraforming Mars.

It may be the case that you don’t own Catan but you love Terraforming Mars. If so, why not add Star Trek Catan to your collection?

Based on the original design by Klaus Teuber and with sci-fi art by Franz and Imelda Vohwinkel, Star Trek Catan brings together the hit game with the hit TV-show, Star Trek.

The rules are near-identical to Catan, with some twists that bring this game into the world of the Starfleet and Klingon. 3-4 players start the game with control of two small outposts and during the game must generate and trade resources, build Starships, and establish Starbases – all of which lead to all-important victory points needed to win the game.

Fans of Terraforming Mars will love exploring and developing this region of space and ‘Trekkies’ will enjoy reminiscing as they play this adaptation of the sci-fi classic.

Marcin Senior Ropka and Viola Kijowska’s Alien Artifacts is a fun, strategic card game that anyone looking for sci-fi board games similar to Terraforming Mars will appreciate.

This 2-5 player game pits players against each other as interplanetary factions seeking to expand their knowledge and power by exploring further into space. Using resource cards, each turn will be spent building new ships, developing futuristic technologies, discovering distant planets, or trading.

Your faction will also attack hostile aliens to gain their mysterious artifacts, which are big point-scorers. Described as a ‘4X’ card game – explore, expand, exploit, and exterminate – in Alien Artifacts players must carefully balance exploration, combat, and point-scoring to win the game.

The final entry on our list of sci-fi board games similar to Terraforming Mars is Seth Jaffee’s card-drafting game, Eminent Domain.

Eminent Domain is an elegant, 2-4 player board game in which players compete to expand their outer-space civilisations by surveying planets, gaining and trading resources, and creating new technologies.

Each turn, the active player will choose a Role to pursue, such as research, boost it by playing matching cards from their hand, and other players can then choose to follow suit.

This civilisation-builder is a tech-focused alternative to Terraforming Mars that is just as rewarding.

Terraforming Mars has consistently ranked highly for board-gamers all over the world. Its epic scale, competitive strategy, and futuristic themes have left many players looking for more sci-fi games like Terraforming Mars.

Whether you’re a sci-fi nerd, a lover of space exploration stories, or enjoy any game that puts you on futuristic frontiers, our list of ten board games like Terraforming Mars offers plenty of loveable, exciting games to add to your collection.

Are you looking for more games like Terraforming Mars? Have any recommendations that didn’t make the list? Let us know in the comments! 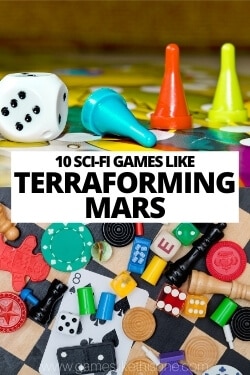