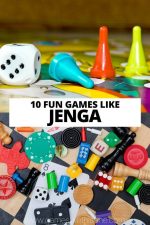 Dexterity games like Jenga have long been favourites amongst those looking for a fun and interactive way to spend family game nights or parties. A simple concept of stacking rectangular blocks and strategically removing them one-by-one sounds so uncomplicated that is is a miracle that Jenga is as popular as it is today.

However, if you’re sick of stacking and removing blocks but still like the general idea of Jenga, then you happen to be in luck. There are countless fun games similar to Jenga that follow the same concepts with different themes and goals that are sure to keep you entertained and coming back for more.

So if you’re on the hunt for some great, fun games like Jenga, you’ve come to the right place. These ten games are sure to entertain you in much the same way.

If you’re on the hunt for games like Jenga but with sticks and marbles, then KerPlunk is an excellent choice for you. Following a similar concept of avoiding everything from toppling over, KerPlunk has been around for decades and has been delighting those who play if for that long, too.

KerPlunk is played by setting a large plastic tube that has a series of small holes around it about halfway up the tube. Players thread thin, plastic sticks through these holes until it forms something like a nest.

Then, marbles are set on top of the nest of sticks. In alternating turns, players must strategically pull out a stick one at a time and avoid having all of the marbles fall out through the tube.

Though it doesn’t use blocks, KerPlunk is very much like Jenga and it is sure to be a welcome addition to your game collection.

Everyone knows and loves the game of Twister and though it doesn’t contain blocks or sticks, it deserves its addition on this list of games similar to Jenga.

If you don’t know about or have never played Twister, it basically can be reduced down to a human version of Jenga. No, you’re not stacking up blocks and removing them in this game — it is far more physical!

Twister involves a large mat with various coloured circles on them and a spinner device that will tell you which hand or foot to put on which colour of circle.

When you have three or more people on the mat, you can get twisted up with your friends and have to strategically find places to put your hands and feet that won’t cause everyone to topple over!

The game is over when someone falls and players are slowly eliminated until the last one is standing. Good for kids and also those who are looking for games like Jenga for adults, there is no denying that Twister is a whole lot of fun!

If you’re on the hunt for games like Jenga then consider getting yourself a copy of Animal Upon Animal, a fantastic stacking game that includes — you guessed it — animals rather than boring wooden blocks.

The concept to the game is really similar to Jenga in the fact that it consists of stacking things and hoping that nothing topples over. Each turn, a player rolls a die and stacks either one or two wooden animals on top on an already established heap, or they can pass one of their animals onto another player for them to stack.

The goal of the game is to be the last one standing — meaning that you don’t want to be the one who caused the animal pyramid to topple over.

The game is great for adults and children alike and is sure to be a welcome addition if you’re on the hunt for a game similar to Jenga but with the addition of some fun animals!

If you like Jenga for the strategy involved when it comes to expertly removing each and every block to avoid a crashing fall, then you’re sure to love Tokyo Highway for its same meticulous nature.

Two players compete to first build a highway system that must follow certain rules regulations and you can only place one thing per turn. Once your highway is built, the goal is to be the first one to be able to place all of your allotted 10 cars onto your highway.

Players must be strategic and calculated with where and how they place their road buildings and cars to avoid toppling their highway or making dire mistakes.

A great game for those who like Jenga and are old enough to have more defined fine motor skills, Tokyo Highway is a must-play.

Another game like Jenga where the goal is to build and build and avoid a toppling mess, Catch the Moon is a great game to add to your collection.

The goal of Catch the Moon is to, essentially, build a complicated ladder to the moon. You do this by, each turn, strategically placing a small ladder so that it adds height to your structure and does not topple over. If you place the ladder that falls or causes the whole structure to fall, you’re out of the game. The last player standing wins!

Very similar to Jenga, Catch the Moon is soon to become one of your favourites.

If you like Jenga but wish that it was a bit more artistic and creative, then Junk Art is sure to be the game for you. There are actually a few different iterations of this game that you can play, but you only need the one set, making it the perfect game for those creative types looking for games like Jenga.

The general concept of Junk Art is that each turn, player is supposed to add to and create an artistic structure using a collection of different wooden and plastic pieces included in the game.

You have to add it in the way that the various cards drawn tell you to do, and you also have to make sure — like with the rest of the games on this list — that you don’t cause the structure to fall to its untimely death.

A super fun game for those artistic types who are bored with the uniform rectangular blocks of a traditional Jenga game, Junk Art is a worthy addition to your games collection.

The only game like Jenga on this list that incorporates a digital component, Beasts of Balance is an excellent addition that is sure to keep you having fun and entertained if you’re a bit bored of simply stacking blocks and then strategically removing them.

Beasts of Balance is played, in the first round, by players taking turns to strategically make a structure of plastic “beasts” so that they don’t topple over.

Once a “beast” has been places, it gets a life on the corresponding iOS or Android app and you must continue to build upon it and do the tasks that are said in the app, all while making sure that the structure doesn’t fall.

Much like Jenga but a bit more interactive, Beasts of Balance is the perfect addition to any strategy stacking game enthusiast’s collection.

If you wish Jenga had a few more elements to make it more challenging added to it and also wish that there was a maritime theme involved, then Riff Raff is an excellent game for you!

This is an excellent addition to this list of games similar to Jenga as it follows the same concept but is a fair bit more challenging.

The goal of Riff Raff is to, each turn, place a wooded object onto a swaying wooden ship and hope that, with each addition, the ship doesn’t capsize on your turn. Just like with the rest of the games on this list, the player who topples the game loses the game.

Riff Raff can play up to four players and is good for children and adults alike!

Click Clack Lumberjack is essentially just a lumberjack-themed version of Jenga, which is why it makes for a worthy addition to this list.

The general premise of the game is that you are a lumberjack and you want to expertly alter a tree without cutting the whole thing down. The game is played by stacking twelve discs on top of each other (it will resemble a tree trunk when completed) and then each turn, a player rolls a die and must make his move.

If a player rolls a three, for instance, then he or she must take a plastic axe and tap the third disk three times. The goal is to play each turn without toppling all of the discs.

Much like Jenga except with a woodsy theme, Click Clack Lumberjack is a lot of fun and is sure to entertain you!

If you’re looking for games like Jenga but with sticks, then Suspend is an excellent choice for you! This game includes the same strategy and goals as Jenga but uses sticks instead of blocks to get there.

Each player begins with 24 sticks and, on the tabletop, there is a thin metal stand. The goal of the game is to be the first player to get rid of the sticks without knocking anything off or over.

Each turn, you must strategically and one stick from the stand and ensure that nothing falls off or falls over — obviously, this gets more and more difficult as each turn progresses.

So, if you’re searching for more games similar to Jenga, consider adding Suspend to your collection — you won’t be sorry!

As you can see, there are countless games like Jenga out there that will keep you entertained while improving your dexterity and strategy skills.

Are you on the hunt for similar games to Jenga? Have any suggestions that didn’t make the list? Let us know in the comments! 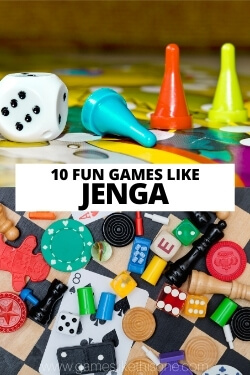