For many of us, games like Twister were cornerstones of our childhood. Stretching our limbs in all directions and collapsing on top of each other in laughter was a regular part of parties and after-school playdates when playing Twister.

Parents enjoyed it too – physical games like Twister are great for keeping kids occupied and active – a perfect mix of puzzle-solving and exercise.

Perhaps you are a parent looking for more party games like Twister that will have your kids and their friends using their minds and bodies to have fun. Our top ten list of games similar to Twister are all fun-packed, physical games that both kids and grownups can enjoy.

Beat That! is an exciting, competitive game that is as fun and lively as Twister and great for family game nights. Kate Jenkins and Zak Walton’s 1-8 player party game is packed with challenges, from races to agility games.

Best suited for kids aged 9+, in Beat That! players will compete in ten physical and fun challenges, betting whether or not they can beat their opponent and tallying up their wins to champion over the rest. Players can work against each other, in teams, or there is even a solo option.

This game is fun for kids, parents, and grandparents alike, and could even be enjoyed by the adults after the kids have gone to bed.

If you are looking for fun, physical games like Twister that are great for young children, Dancing Eggs is a quick party game sure to get all kids off their seats. Dancing Eggs, designed by Roberto Fraga, comes with an egg box with 9 plastic, bouncy eggs and one wooden egg plus dice.

2-4 players will roll the red die and depending on the result they can grab an egg, steal one from their competitors, bounce an egg off the table and compete to catch it or race around the table to gain an egg. Once you’ve got an egg, roll the white die to see where you need to hold it – it could be in between your neck and shoulder or between your knees.

Once an egg has been dropped, the game ends and whoever has kept the most eggs wins! This active, fun game can be played by kids aged 5 and up, making it a great, easy game for youngsters and an excellent choice if you’re looking for your next game to play after Twister.

Don’t Step In It!

Another fun, physical party game like Twister, Don’t Step In It! will get kids on their feet and laughing as they try not to step in fake dog poops whilst blindfolded.

Playable for kids aged 4+ and for up to 99(!) players, Bob Driscoll and Don Ullman’s Don’t Step In It! is a surefire hit at kids parties.

The rules are very simple – when it’s your turn, pop the blindfold on, the spinner will determine how many steps you need to take across the mat and other players will lay out the dog poops in the hopes of you stepping on them. The winner is whoever steps in the least!

This silly game will keep the kids occupied and provide plenty of laughter for children and parents alike.

If you are looking for games similar to Twister that will encourage kids to improve their flexibility, The Yoga Garden Game is the perfect introduction to yoga for kids as young as 3.

This beautiful co-operative game, designed by Jennifer Durand and Laura Pizzarello Scott, has players move a bumblebee around the board. Some spots on the board ask players to copy the yoga pose illustrated whilst others invite them to make up their own.

While the suggested players are 2 to 6 people, it can also be enjoyed as a solo player or with more people at a party.

The Yoga Garden Game is a peaceful and interactive game that will encourage your little yogis to test out their moves and creativity.

Bounce-Off: Fast and Fun is a quick ball-bouncing game for 2 players – or four if you work in two teams. Players draw cards and must bounce balls onto a grid to re-create the pattern on the card.

This fun game can be enjoyed by anyone aged 7 and up and will be just as fun for the adults involved. Like Twister, your kids’ hand-eye co-ordination skills will be tested. The Fast and Fun edition is travel-sized, making this a great mini-game to take on holiday with the family.

There are larger editions of the Bounce-Off game too – including Bounce-Off: Rock ‘n’ Rollz and Bounce-Off: Bullseye.

Marvel: I Can Do That!

If you’re looking for more physical games like Twister, Marvel: I Can Do That! is a rewarding and playful game for all the Marvel-loving kids out there.

Kids aged 3 and up will love this superhero-themed game that has players battling against the Green Goblin through a series of physical challenges – from climbing through portals to crab-walking under foam noodles. It plays up to 4 players with an average game lasting around 15 minutes.

The game comes with colourful parts and encourages a can-do attitude from all players. Marvel: I Can Do That! is the perfect game to introduce young kids to gaming whilst keeping them active and engaged.

This fun and simple scavenger-hunting game is great for families looking for more engaging ways to spend time outdoors.

Suitable for kids aged 3+ and up to 6 players, gofindit encourages kids and parents to explore outside, whether it’s their garden or a local park, to use their senses and locate objects from the cards.

As educational as it is fun, gofindit promotes language development and image recognition, all while getting families out and about. Developed by Sensory Trust, the profits from this game are donated to this charity who are helping everyone, from children to the elderly, gain more access to outdoor spaces and nature.

Kerplunk is a classic kid-friendly game that parents looking for engaging, fun games like Twister will find to be a perfect addition to their games collection.

This puzzle-solving classic, designed by A. Eddie Goldfarb and René Soriano, is great for kids aged 5+ and offers a fun challenge for all ages. 2-4 players remove colourful sticks from a tower filled with marbles. Any marbles that fall must be collected by the player and the player with the least marbles at the end of the game wins.

First released in 1967, many parents will remember playing Kerplunk during their own childhoods and will surely love seeing their kids do the same.

Throw Throw Burrito has been described as a cross between a card game and dodgeball. If you’re looking for physical games similar to Twister, Matthew Inman, Elan Lee, and Brian S Spence’s Throw Throw Burrito is an exciting and silly party game suitable for kids aged 7 and up.

2-6 players will rack up points by collecting sets of cards. But watch out – the soft burritos can be chucked at other players and if hit they lose cards. While this is not a game to play in a room full of fragile ornaments, this lively party game is a mix of physical skill and tactical card grabs.

From the creators of Exploding Kittens, fans of Twister will be left laughing and maybe a little exhausted after a game of Throw Throw Burrito.

Artsy Fartsy may not be as physical as Twister, but it will get the whole family flexing their artistic muscles in a hilarious way. Artsy Fartsy is fast-paced, silly, and most importantly engaging for kids of all ages.

Sure, some cards will have kids drawing poops and farts, or trying to draw with their eyes closed or with their opposite hand, but this only makes the game funnier for everyone involved.

This 4-12 player game is recommended for kids aged 10 and up, but its creators add that any kid who can read and draw can enjoy this too with some help from grownups. Artsy Fartsy is a great choice if you’re looking for a game similar to Twister for your next games night!

Party games like Twister are all-time favourites for kids and grownups alike. After all, it’s physical, fun, and silly! Our list of ten games like Twister offers all sorts of family-friendly games for everyone – from toddlers to grandparents.

If lively, creative, and skill-testing games are staples of your family games nights, birthday parties, or after-school club, these ten games will keep everyone engaged and giggling.

Are you searching for more physical games similar to Twister? Have any recommendations that didn’t make the list? Let us know in the comments! 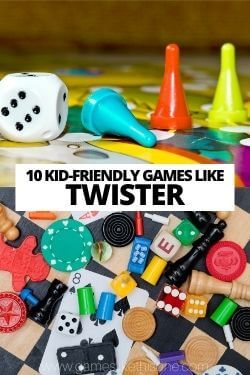