If you’re on the hunt for games like Love Letter and you love its portability, small deck, and social deduction, this list of 10 similar card games has plenty to choose from.

Love Letter is a fast-paced, 2-4 player card game designed by Seiji Kanai. The premise of Love Letter is that each player is a courtier trying to woo a princess locked away in a tower. All courtiers are trying to get their letters to the princess and intercept their rivals’ letters.

Love Letter has just 16 cards and each player starts with a card in hand, draws a card, and plays a card. Cards represent members of the court and have different powers, but playing cards also reveals them and due to the small deck, there is an element of deduction as players try to figure out what their competitors’ are holding. When the deck is empty, the player holding the highest value card wins the round.

Simple yet effective, Love Letter packs a punch despite only being a 16 card deck. If you’re after fun card games like Love Letter, check out our top 10.

If you enjoy the social deduction element of Love Letter, you will love The Resistance: Avalon. In this 5-10 player game, designed by Don Eskridge, players take on roles from the legend of King Arthur.

Some of the players will be part of the side of ‘good’ – knights of King Arthur and the special roles of Merlin and Percival. Other players, however, are secret agents of Arthur’s nemesis – Mordred – including Mordred, Morgana, and an Assassin.

Coup is another fun, fast-paced bluffing game that anyone searching for games like Love Letter will enjoy. Designed by Rikki Tahta, this 2-6 player card game takes just 15 minutes to play.

Coup takes many elements of Love Letter to create an elegant and effective game. Players are Italian nobles competing for influence. Players each control two ‘character’ cards but can take the actions associated with any of the characters.

Other players can challenge a player who claims to have a card they do not, forcing them to forgo their action and lose a card. The last player with one of their character cards face down in front of them wins the game.

Council of Verona is a quick, 2-5 player card game that takes Shakespeare’s Romeo and Juliet as its inspiration. The Montagues and the Capulets are feuding, so the prince of Verona has formed a council to bring peace. The players are nobles on this council.

In Council of Verona, designed by Michael Eskue, players are dealt cards – some are ‘agenda’ cards that they can choose to exile, place on the council, or bet on. Others are character cards that players can use to further their agenda cards.

Victory points are scored by backing successful agendas and, when all the cards have been played, the player with the most points wins.

Fans of Love Letter will find plenty to love in Bruno Faidutti’s Citadels. If you’re looking for deduction games like Love Letter, Citadels ticks all the boxes.

In this 2-8 player game, players secretly choose a character from character cards numbered 1-8. Each character grants different abilities and players take turns in order of what number their chosen character card is.

During each round, players use their character’s ability to gain gold and erect buildings. When a player has built their eighth building, the game ends, points are scored based on buildings, and the player with the highest score wins.

Citadels combines deduction with city-building and is a simple yet rewarding alternative to Love Letter.

Mascarade is a great deduction party game that anyone looking for card games similar to Love Letter is sure to enjoy. This card game designed by Bruno Faidutti can be played by 2-13 players in half an hour.

At the start of Mascarade, players are each dealt a character card face up. The cards are face up for a few seconds, giving players a chance to memorize them, before being turned face down. Players are given six coins each and the first player to have 13 coins wins the game.

On your turn, you can earn coins by declaring a character and using their ability. You do not need to have this character in front of you, but if another player reveals that they have that character, you cannot take that action and you lose a coin. You can also swap cards with another player or check your own character card.

The rules of Mascarade are very simple, but there is a lot of bluffing and deduction involved in this game, making it great for parties or as a filler on games nights.

Saboteur is another light card game that anyone looking for bluffing games like Love Letter will love. Saboteur is a 3-10 player card game designed by Fréderic Moyersoen in which players are dwarves mining for gold – but some players are saboteurs, trying to keep gold for themselves.

Saboteur is played over three rounds and players receive action cards and path cards which they must use to reach the goal cards – this is where the gold is.

The player with the most gold at the end of three rounds wins the game.

The Castle of the Devil

If you’re hankering for games like Love Letter, The Castle of the Devil is a great alternative. This card game is designed by Michael Palm and Lukas Zach and can be played by 4-8 players in 20-40 minutes.

Each association needs 3 specific items to win the game, so players must try to figure out who is on their team and who holds the items they need.

Bruno Cathala and Serge Laget’s 3-7 player game, Shadows Over Camelot, is perfect if you’re looking for games like Love Letter that pack a bit more punch.

In Shadows Over Camelot, players take on the role of knights of the Round Table who must work together to overcome a variety of evils. But one knight may be a traitor.

Over the course of the game, players try to add ‘white swords’ to the Round Table by succeeding against evil. If they fail, a black sword is added instead. The players win the game if, when Camelot falls, they have a majority of white swords on the Round Table.

If you play the game with the traitor option, one player will be secretly trying to hinder the other players and add black swords to the table.

Okay, Cursed Court isn’t technically a card game. But if you’re after games similar to Love Letter, there’s plenty to love in Cursed Court, a game packed with deduction and speculation.

Cursed Court takes place over three rounds, or ‘years’, and each year has four ‘seasons’. The board shows nine characters of the court.

Players place bidding tokens on tiles and can bump players off other tiles. Players score points at the end of each year for the characters that appear on the cards that they have successfully betted on, with various combinations of appearances scoring different amounts of points.

In Infinity Gauntlet, one player is Thanos and the other players are the Avengers. Thanos’ goal is to either kill the Avengers or collect all six Infinity Stones in front of him and in his hand. The Avengers’ sole goal is to kill Thanos.

Each turn, players draw a card and play a card. Cards have various abilities, such as letting players attack their opponent or view and defeat cards in each other’s hands. Infinity Gauntlet has some of the deduction elements of Love Letter, but with a stronger emphasis on hand management.

Love Letter has been a beloved card game since its release in 2012. Combining elements of deduction, bluffing, and hand management, players love the simplicity of this portable card game.

If you’re searching for games like Love Letter, this list has something for everyone. From fast-paced social deduction games to card games filled with bluffing and intrigue, there’s plenty of fun and rewarding games out there.

Are you searching for more games similiar to Love Letter? Have any recommendations that didn’t make the list? Let us know in the comments! 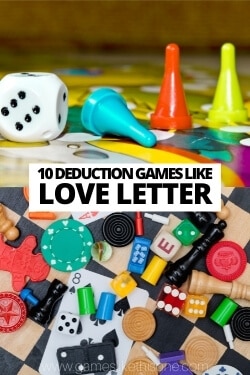