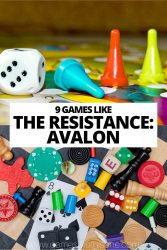 It’s no mystery why you’re looking for board games like The Resistance: Avalon. It’s the ultimate party game for the group that doesn’t mind sowing some distrust between friends.

The Resistance: Avalon has been going strong for nearly a decade now, it still gets pulled out at plenty of game nights and gatherings largely because it allows for up to a whopping 10 players and lets the whole lot of you get a taste for backstabbing and badmouthing.

Just like it’s sister The Resistance, it makes the semi-collaborative play feel completely nerve-wracking and allows for all the cross-table talk and amateur detective work a Player might want to throw at it. The games on our list today have all been picked to provide you with more of exactly that experience.

Released in the same year, Coup is a perfect choice if you’re looking for games like The Resistance: Avalon. This game also has players hold secret cards, their two cards are the identities of the characters they have political control over.

The two to six players taking part will be able to bluff about who they have under their thrall to take advantage of different turn moves but can be challenged by the others at their table at any point so they might not want to push their luck too far.

Players can also choose to “Coup” by paying seven coins they’ve collected and knocking out one of any other player’s influences. This will make it harder for them to lie but when you back someone into a corner, watch out for the backlash.

Werewolves of Miller’s Hollow is a different take on the exceptionally popular game, not just because of its beautifully illustrated square cards but also the many new characters players can take on. This board game just like Resistance: Avalon can have many players, capping at 18.

While the player given the werewolf card will try to hide their identity the others will use their special abilities in the night and their mystery-solving skills during the day to try and learn who they are.

It’s fast and easy to come to grips with, only taking 30 minutes a round at most so there’s plenty of chance to play a number of rounds in one night.

Letters from Whitechapel will need two to six players and is a longer more atmospheric game but it is entirely worth the extra work and its long run time. The beautiful map of London will become the Jack player’s secret playground as the other players — the police detectives — follow the trail of the vicious murderer.

This game like The Resistance: Avalon relies on bluffing, both with marked and unmarked pieces placed on the board and the cautious cat-and-mouse of the hunting phase. However, players won’t be able to rely on blind luck. There’s a lot of investigation involved as well.

By the end of one of these games, the detectives will probably feel like they’ve really been on the job. Let’s just hope Jack doesn’t get any funny ideas.

If you’re looking for a party pleaser, why not go for this reimplementation of the classic Spyfall and try your hand at finding the Joker. If you’re looking for something silly but want the detectives on the table to get a chance to shine, this game is a great substitute for The Resistance: Avalon.

The non-Joker players will work to search out the villain while the Joker themself will try to determine what location in the DC universe the group is in. However, there are some twists to this that allow it to veer even further from the original. There’s even a chance that there could be multiple jokers on the table.

Wacky comics logic abound in this one.

Another one for the party setting, Deception: Murder in Hong Kong is a good quick start to game night perhaps. This game has a campy noir look and the death tiles despite their dour usage are lovely to look at.

This game has a bit of a difference to the rest of the games like The Resistance: Avalon in that it has one lead player, the forensic scientist, who starts the game knowing which player is the murderer.

However, while the Investigators get to discuss who they think is behind the crime, with the murderer hiding in their midst and misleading them, the forensic scientist who knows the truth can only place scene tiles to leave clues to what they know. No speaking or sneaky gesturing allowed.

Codenames is the dose of Spy v Spy drama every game night needs.

Two to eight players will be divided into the red and blue teams and the spymasters of each team will work with those players to reveal all the spies in their team on the board.

While the Spymaster of course wants to do this before the opposition, they are only allowed to give cryptic clues to their players who ultimately have the power to choose which cards on the board to overturn.

They must pick wisely or else they might flip the oppositions’ cards and score them a point or even flip the assassin’s card and kill their entire team. This one is high-stakes and high-drama, I would highly recommend it.

This board game like Resistance: Avalon is about investigation but Detective – Season One takes it further than anything else on the list. The app for this game works with players and all the parts they’ll find in the game’s box.

One to five players will be part of a group discussion and come to choices together as to what leads to follow, where to dig deeper and what final report to put in based on what they were able to learn together.

The final phase asks each player questions and grant them points based on their answers. It’s even more fun if you’re a fan of murder mysteries, as player’s detectives have profiles and personalities that they can act out.

Captain Sonar is the kind of game that relies on teamwork so heavily that it’s pretty easy to hate your teammates a little bit by the end. This deeply cooperative game asks two to eight players to take control of a submarine and steer it through the oceans to seek out the enemy.

Each player takes on a different job and responsibility, only the captain can move the ship, only the radio operator can figure out the enemies location, only the first mate can ready any attack moves and only the engineer knows where the damage in the ship is and what direction the captain should move in so they can fix it.

You can assume the amount of communication needed for this to go smoothly is that team-destroying kind I was speaking about earlier.

Werewords is another game that runs on an app and via the board, however, this is conversely probably the easiest party game of the lot to get the hang of.

The app will give the player who’s taken on the role of mayor a random word, chosen from the thousands in its database. The mayor will then take “yes” or “no” questions from the remaining players to help the villagers guess it.

Even if the group answers correctly, if the werewolf can guess the seer’s identity the team has lost.

That brings us to the end of our list of investigative party games in the style of Resistance: Avalon. Next time you have a big group you should definitely try bringing one of these out. Truly, any of the games on this list will be able to keep you satisfied and entertained for the next decade.

But if you’re still looking for board games like Resistance: Avalon after that, why not look into any number of the separate editions and expansions of these titles.

Are you looking for more games like The Resistance: Avalon? Have any recommendations that didn’t make the list? Let us know in the comments! 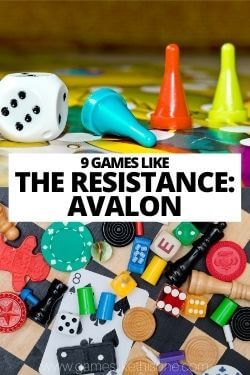