The first of its kind, Magic: The Gathering was created in 1993 by Professor Richard Garfield and became a much-loved global success. Now nearly three decades later, if you’re talking about Trading Card Games then you’re still just as likely to end up talking about the granddaddy of them all, MTG. And if you’re looking for more games like Magic: The Gathering, this is the article for you.

Starting off with a card game like MTG in its infamy and longevity, we have the Pokemon Trading Card Game. This was created following the craze around the video games and anime but despite its age, the game is constantly getting new updated decks and has an ever-active tournament scene.

It attracts a huge young audience because of its ease of play even compared to other TCGs. But it still involves a lot of fun variation and underpinnings from the series that fans will enjoy seeing including Pokemon evolution, a six-Pokemon offence and those annoying special conditions like Paralysis and Sleep.

Next on this list of games like Magic: The Gathering, we have another game with a youth-friendly IP and play-style next. Star Wars: Destiny is a richly illustrated trading card game depicting new and classic characters from the series we all know and love.

It’s supremely innovative play includes the use of collectable dice to combat the Light Side or Dark Side depending on how a Player crafts their deck. This is a relatively easy-to-understand game and doesn’t take over an entire table or take eight-step plans to trigger a single effect. That means picking this game up is much easier for young fans and people a little bit newer to the TCG medium.

Likewise, the playtime isn’t very long so you’re not going to need to book out a full afternoon to get a few games in.

A Game of Thrones: The Card Game

Another readily known property turned card game similar to Magic: The Gathering, although this one is for the bigger boys and girls. A Game of Thrones is not your run of the mill game adaptation, as well as having amazing illustrations inspired by the book descriptions and a number of expansions to collect and gawk at, the game itself has been worked on over the years and a second edition, released in 2015, is now available.

This update has made the game much easier to understand for new players and allowed more streamlined play for seasoned veterans. In this game, you’re playing as one of the eight factions of the Seven Kingdoms and you’ll be springing plots on one another to resolve. Which can, unsurprisingly for a series as twisty and surprising as A Song of Ice and Fire, get complicated pretty quickly.

Deckbuilding sets can be a great addition to your gaming collection depending on how far you’re willing to stray from card games like Magic: The Gathering and will be featuring throughout this list. So, if you’re interested in trying one let the DC Comics Deck-Building Game be your first.

The tagline “Fight the never-ending battle for truth, justice, and peace” is right in that the battle never stops with new DC Comics villains rising each time a well-known adversary is defeated on the field. Players can choose from their favourite character to play as and then they’re running down the clock until either the main or villain deck finally runs out. All the while, working to assure that they have the most victory points when that happens.

Gameplay is fast and addictive and it’s a straight shot to the nerd nostalgia whenever you open the box.

Another TCG Grandpa right here, these behemoths are the kind of games that have lasted a long time for a good reason and Yu-Gi-Oh! is not a game to take lightly. Like Magic: the Gathering, in this combat card game players are working to reduce their rivals lifepoints to an absolute zero. This time from 8000 total points.

However, they can also win by making their rival run out of cards to draw into their deck or enacting win conditions by drawing and playing certain combinations. Currently in print, there is the heavy on strategy original Yu-Gi-Oh! and the faster-paced more frenetic Yu-Gi-Oh! Rush Duel that has quickly taken off with fans.

For those looking to try the game for the first time, these will both provide a Yu-Gi-Oh! experience but there is enough variation in play that I’d advice they try both to see what style they might prefer.

Keeping with the Japanese influence, this deck-building card game puts the players in place of the masters of competing mansions staffed entirely by cafe-style maids. A quick google search can bring up the crazy amount of these maid services themed restaurants in Japan’s cities, particularly Tokyo and now this craze is in game form.

With Tanto Cuore, Players can live the fantasy of being the rich and fabulous “master” of their own stately home inside the confines of their own very probably less stately home. Players will sabotage rival’s mansions by making their maids sick or teaching them bad habits while they reside within their private quarters.

As you might be able to tell from that last line, some of the art in this game has a slightly more adult feel and utilises some anime/manga tropes to hilarious effect. So, this might be another one on the list to save for the older crowd.

There’s a more traditional fantasy setting for this card game like in Magic: The Gathering, but while it’s classic the card and board art are anything but ordinary. The muted saturation and more mature and dark look separates this game from some of the more child-friendly titles earlier on the list.

However, the adult look of the game doesn’t bring a heavy bog of rules with it. In Ascension, players start with a relatively small hand and buy their way up to a larger hold with their runes. This one will definitely come as a breath of fresh air for people who are looking for simpler options whilst still enjoying games like Magic: The Gathering for their aesthetic and engaging play.

For people who would love to play games like Magic: The Gathering but are a bit bored of the fantasy settings, why not try something a little out of this world. Star Realms is a quick-paced deck builder in which players will head starship armadas and try to collect enough bases and ships to defend their own Authority while fully destroying all of their rivals.

The different kinds of ship and base cards available to players all fall under one of four Factions and receive rewards for being used in conjunction with others that also fall under them. These factions work to help players make precise and challenging plays, looking to fulfil cards needs and keep the tensions high.

There are also a number of different ways to play the game – with a score of unique decks for sale and up to six players in Boss, Hunter, or Free for All modes – so the game has an inexhaustible potential for replaying.

Just like with TCGs and Magic: The Gathering, the Deckbuilding dynasty rests on the shoulders of Dominion so there was no way it wasn’t going on this list. Its creator was credited within the Official rule set for Magic before he completely changed the market bringing out Dominion in 2008.

This game puts players in the place of feuding monarchs, all starting off with an essentially frugal hand and buying their way up to a position ruling over all the victory land cards they can possibly get their hands on. In the same fashion as it’s offshoots, discarding and hoarding helps Players build a deck that will lead to victory.

While the base game may look a little archaic today compared to some of the other deck builders on this list, there are expansions and auxiliary packs galore to keep hardened fans of the medium excited.

If you’re in the mood for something spooky then you should try your hand at the Lovecraftian treasure that is Arkham Horror: The Card Game. Springing off of the board game, which itself is based on the Call of Cthulhu RPG, this game has a lot of history.

Although the turns are played around agenda and act cards in reality it plays very similarly to a card game like MTG and the deck builders on this list. Players build decks dependent on their chosen character and then collect clues, attacking other characters and finishing scenarios.

The decks players build for play aren’t too unwieldy in size which makes it easy to follow and the rules are intuitively offered on action cards. The eerie illustrations’ and icy palette also hark to a more gothic version of the original Magic: the Gathering series.

Magic: The Gathering has built a legend so grand that games have erupted in crazy numbers just to exist in the space it’s carved out and without these, it’s pretty easy to just look through Garfield’s own back catalogue – the list is definitely long enough to keep you interested.

But if you’re ready to step out on Richard and try something new then we’ve got you. From Pokemon to Star Wars to Game of Thrones, this one somehow got even nerdier than the usual Games Like This list. But if you found something that you can’t wait to try don’t forget to check them out at the links.

Are you searching for more games like Magic: The Gathering? Have any recommendations that didn’t make the list? Let us know in the comments! 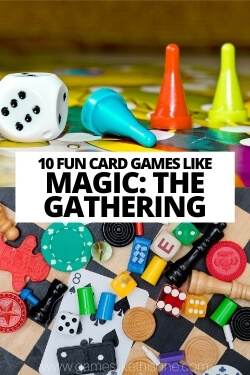