Mouse Trap is a classic kids’ game that many of us have played growing up. First released in 1963 and revamped in 2004, this 2-4 player is a fun-filled game all about building Rube Goldberg-inspired mouse-catching contraptions. Whether you enjoyed Mouse Trap as a kid and are looking for something with the same magic or you need a new game for your children, this list of 10 fun board games like Mouse Trap has something for everyone.

Andrew S. Berton and Michael Marra’s 1313 Dead End Drive is a fun bluffing game in which you hide your identity from players and avoid traps on the board. If you and your family enjoy the fun physical components in games like Mouse Trap, 1313 Dead End Drive could be a new family favourite.

In this 2-4 player game, players aged 8 and above take on the role of various characters who are trying to escape from a mansion with as much money as possible and without being murdered by their opponents.

Characters can be murdered by being moved into traps and their money moves to the next person on the line of succession – so killing off characters above you in the will means you’ll get more money! 1313 Dead End Drive is a silly, trap-filled game with lots of bluffing that families are sure to enjoy.

Mouse Trap is all about catching each other’s mice, but in Magic Maze, you must silently work together to rob and escape from a shopping mall. If you are after games similar to Mouse Trap, either for your kids or you and your friends, Kasper Lapp’s Magic Maze could be your new favourite.

This 1-8 player game takes just 15 minutes to play and is suitable for players aged 8 and above. Players must move the four robbers around the shopping mall and each player can move a robber in a specific way, such as north or up the escalator.

The catch is that you cannot speak or give visual clues during most of the game. Players must rely on short periods or communication and intuition to figure out when they need to move a robber if the heist and escape can be successful.

If you have young children and they enjoy the physicality of board games like Mouse Trap, Animal Upon Animal is a cute kids’ game suitable for players aged 4 and above. This simple stacking game contains 29 cute wooden animals for kids to carefully stack on top of each other.

The wooden animals are divided evenly amongst 2-4 players. Each turn, the active player rolls a die that tells them what action to take.

The rules are very simple and not unlike other dexterity games like Jenga. The different-shaped animals add an extra layer of fun to the game and reviews often commend this game for being as fun for parents as it is for kids.

If your children love games like Mouse Trap and you’d like to buy them a game that combines fun with learning, Circuit Maze could be a great gift. Recommended for kids aged 8 and up, Circuit Maze uses real circuits (and is completely safe) and challenge cards to get kids learning about electricity.

Circuit Maze comes with all the components needed for making circuits – a two-part power supply, LED light bulbs, and circuit pieces in a variety of shapes. It also comes with 60 challenge cards that show where the bulb and the two power supplies need to go.

Kids then use the rest of the circuit components to light the bulb. Circuit Maze is a great stealth learning game for kids that will provide plenty of fun.

Scott Frisco and Steven Strumpf’s Rhino Hero is a fun, quick, 2-5 player children’s game that young kids who want games similar to Mouse Trap are sure to enjoy. Rhino Hero is a card stacking game in which kids will build a huge card tower for the superhero, Super Rhino!, to leap from.

Each player starts the game with five roof cards and they take turns adding wall cards and roof cards to a single, stacked building. On a turn, the active player places walls on the highest floor and then chooses a roof card in their hand and places it on the walls.

Each roof card has symbols that indicate where the next player must place walls on the card. Some roof cards have special symbols that force players to place a second roof, change the direction of play, or move Super Rhino! to a new location on the tower.

Suspend is another fun building game that families looking for games like Mouse Trap will love. This 1-4 player game takes just 15 minutes to play and is recommended for kids aged 8 and above, although kids aged 6 and above can still enjoy this with parents.

Suspend has 24 notched, rubber-tipped wire pieces that are split amongst the players and a stand that the wire pieces can be hung from.

Players take it in turns to carefully hang pieces from the stand and the pieces on it. If any pieces fall, the active player has to collect them all. The first player who hangs all of their pieces wins!

Brian Gomez’s ICECOOL is a fun children’s game that anyone after games like Mouse Trap will have fun with – especially if they’re happy exchanging mice for penguins. This 2-4 player game is great for kids aged 6 and up.

In ICECOOL, the board is a big frozen school and the players are student penguins. The penguins are trying to get fish tokens which are placed above the doors in the school.

The players each have a penguin token which is a small, plastic piece that can be flicked to spin around the board, through doors, and jump over walls. Fish tokens are gained by going through doors and a card from the draw pile tells you how many fish you gained.

If you love the puzzle-solving, escape element of Mouse Trap, EXIT could be your new favourite game. Suitable for friends or families with kids aged 12 and up, Inka and Markus Brand’s EXIT series of games combines an escape room with a board game.

The EXIT series has a variety of settings to choose from – The Forbidden Castle, The Forgotten Island, and The Polar Station are a handful of the locations that these games have on offer.

1-6 players set up the room and must find a series of clues through puzzles and the game’s components to escape the location together.

These games are great if you and your friends or family want to spend a weekend away from the TV in an at-home escape room.

If your kids love games like Mouse Trap, there are lots of fun Rube Goldberg Machine-stye building games that will get their creative juices flowing and teach them about science like the physics of motion and aerodynamics. National Geographic’s Marble Run is just such a game.

Marble Run contains marbles, tube pieces, connecting pieces to secure the construction, and bases. It also includes a learning guide with instructions and guides for building your first marble run. Kids build intricate towers and run their marbles through them. Marble Run is great for kids aged 8 and above.

If you enjoy the fun, toy-like components of Mouse Trap, you’ll easily be won over by Camel Up’s pyramid dice tower. Pyramids aside, Camel Up is a great game if you and your family are searching for games similar to Mouse Trap.

Designed by Steffen Bogen, this 3-8 player game has players betting on camels racing around a pyramid. The dice rolled in the pyramid dice tower determine how each camel will move, so where they end up in the race can be unpredictable. Place a bet early on a winning camel and you could win big, but that camel could trip and fall before reaching the finish line.

Camel Up is suggested for gamers aged 8 and above, but reviewers have suggested that with the help of parents, kids aged 6 or 7 can join in on the fun – as can grown adults!

Games like Mouse Trap are popular with kids because of their quirky components, building activities, and puzzle-solving elements. This list of 10 fun family games like Mouse Trap has a great selection of games for kids of all ages – and plenty that adults can enjoy too.

Are you looking for board games similiar to Mouse Trap? Have any recommendations that didn’t make the list? Let us know in the comments! 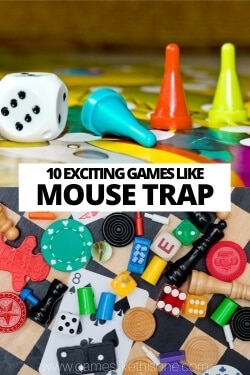