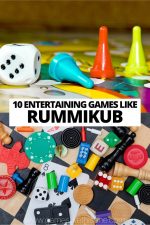 Rummikub has been a family classic for decades. Invented by Ephraim Hertzano, who crafted the first set himself and played it with his family in their garden, this tile-placement game became America’s best-selling game in the 1970s.

Taking elements from the card game rummy, Rummikub is made up of 104 tiles, made up of four colours and numbered 1 to 13, plus two jokers. Players randomly get 14 tiles each and must get rid of them by creating sets (same number but different colours) or runs (a sequence of numbers of the same colour).

Players can use the tiles they have or manipulate sets and runs on the table and the first to get rid of all their tiles wins. The rewarding simplicity of this game that tests strategy and maths has made Rummikub a hugely popular game for kids and adults alike.

So if you enjoy this game and are after board games similar to Rummikub, look no further than our top ten.

Rummikub is inspired by rummy and the traditional Chinese tile-placement game, Mahjong.

Developed in China in the 19th century, Mahjong is a popular game for all ages and played throughout Asia. Rather than coloured numbers, Mahjong tiles have traditional Chinese characters and symbols.

Taking place over 4 rounds, 4 players begin with 13 tiles and must draw and discard tiles to create a winning hand of 14. The winning hand is traditionally made up of 4 melds and 2 eyes. Melds are groups of tiles that can include sets of 3 or 4 identical tiles or suited tiles that form a sequence – much like Rummikub!

The eyes are two identical tiles, separate from your melds. There are variations of the rules across Asia, all of which can be explored with a single Mahjong set.

If you’re looking for games similar to Rummikub and would like to try out this traditional game, Mahjong will not only be a great time for the whole family but offer a rewarding cultural insight too.

Tile-placement board games like Rummikub are popular with seasoned gamers and families alike. Kingdomino, designed by Bruno Cathala, is a fast-paced, 2-4 player game sure to be a hit with everyone.

Points are scored based on connecting terrain types and all-important crown symbols. This simple game with beautiful art by Cyril Bouquet is a great warm-up game at game nights as well as a fun starter-game for young gamers.

Described by its makers as Rummikub ‘extreme’, Mindblock is a colourful upgrade from Rummikub for 2-4 players.

Designed by Dan Klitsner, rather than numbers Mindblock uses brightly coloured blocks which can be combined and stacked to create sets and runs. The game-play is nearly identical to Rummikub, but the 3D blocks and the stacking component make this a unique and creative experience.

With as much strategy as Rummikub, Mindblock is a great game for families or anyone who just can’t get enough of Rummikub.

Another classic board game like Rummikub, Shut the Box was created in the 18th century and was traditionally played in English pubs. Numbered tiles are placed upright and 2-4 players roll the dice to try to ‘knock down’ the corresponding numbered tiles – either the two numbers on the dice or their total.

The active player keeps rolling until they cannot knock down any more tiles and then adds up the total of the tiles they knocked down. Shutting the box, or, in other words, knocking down all the tiles, gives you an immediate win.

Otherwise, you can play until a player hits a total of 45. This is a game of pure luck and was traditionally a gambling game – but it can be enjoyed at home with family and friends too!

So why not pour some ‘pints’, whether they are beer or lemonade, and bet some small change or sweets to try and shut the box?

Marrakech transports players to Morocco where you are all rug-sellers. This 2-4 player game, designed by Dominique Ehrhard, is a fun and incredibly visual tile-placement game that encourages you to outwit your competitors.

Assam, a rug-seller, is rotated each turn, you roll the dice to see how far he goes, and then you place your carpet underneath him. If you land on another player’s carpet, however, you must pay them.

When all the carpets have been placed the game ends, players gain coins for how many visible carpets they have on the board and the richest player wins.

If you’re looking for board games similar to Rummikub that involve strategy, tile-placement, and puzzle-solving, then this is a great addition to any gamer’s collection.

Perhaps you are looking for card games like Rummikub that involve set-collecting with a splash of luck? If so, Archaeology: The New Expedition is perfect for families or casual gamers looking for a fast and fun game.

Designed by Phil Walker-Harding and with art by Atha Kanaani, Archaeology: The New Expedition is a 2-5 player game in which you are archaeologists exploring an Egyptian desert.

Each turn, players dig for treasure by drawing a card from the deck. Fingers crossed you find a treasure that you can sell to the museum or even a thief that lets you steal a card from another player. But watch out – you might draw a sandstorm and cause all players to lose half their cards!

By digging for treasures, stealing from your competitors, and trading at the market, you can build a valuable collection and win the game!

How does Rummikub with words sound to you? Yes, Scrabble is the staple of the genre, but Upwords is a lighter, more streamlined wordy tile-placement game.

Players lay lettered tiles to form words and score points as they go, although unlike Scrabble the letters are all worth the same number of points – making this more approachable. Upwords has a further twist – tiles can be stacked on top of each other and doing so will score you more points!

This 2-4 player game is designed by Elliot Rudell and is a great family game for those who enjoy the simple strategy of Rummikub but prefer words over numbers.

Hive is a strategic, 2-player game that is great for couples or families looking for games similar to Rummikub. There is no board in Hive, instead players place their bees – hexagonal pieces – on any flat surface and try to surround their opponent’s queen bee.

Designed by John Yianni, Hive is a fun, simple, and competitive game. You can block your opponent and carefully plan how your different bees will move around and reach the queen bee.

A great game for bee-lovers and gamers, Hive is a light game that will entertain kids on long train journeys or end a games night with its quirky take on the tile-placement genre.

If you’re searching for card games like Rummikub, Red7 could be your new obsession.

This quick, family-friendly game is for 2-4 players and designed by Carl Chudyk and Chris Cieslik. Red7 contains 49 cards – each a different colour of the rainbow and numbered 1-7. The cards are valued depending on their number and colour – Red7 is the highest value card.

The card you play from your hand changes the rule as to what card can be played next and you are eliminated if you cannot play a card. The game can be as short as 5 minutes or, if you all have strong hands, as long as 30.

Red7 is an addictive, fast-paced game with ever-changing rules, making it a fun and refreshing card game for casual gamers, families, and even experienced gamers.

Christopher Chung’s Lanterns: The Harvest Festival is a fantastic 2-4 player game that will provide plenty of fun for those looking for board games like Rummikub.

This is a beautiful game in which players receive tiles depicting various colourful lanterns. Like Rummikub, you must place these tiles but rather than trying to empty your hand you will score points as you go.

Placing a lantern gives you and all other players a corresponding lantern card and you collect these to create sets – such as three identical cards or a set of all seven colours. Strategy is key as you must try to gain the lantern cards you need whilst preventing your opponents from doing the same.

Lanterns: The Harvest Festival is a relaxed, light game that can be enjoyed by families or friends in just 30 minutes and is a colourful alternative to Rummikub.

Finding board games like Rummikub can open up a world of tile-placement, set-collecting games that are fun for families, couples, and friends. Whether it’s the simple strategy, the feel of those plastic pieces, or scouring the table for sets you can manipulate that you adore, players’ love for Rummikub has made it a timeless classic.

This list, however, will introduce you and your friends and family to all sorts of new and exciting games like Rummikub to freshen up your game collection and liven up games night.

Are you searching for more games like Rummikub? Have any recommendations that didn’t make the list? Let us know in the comments! 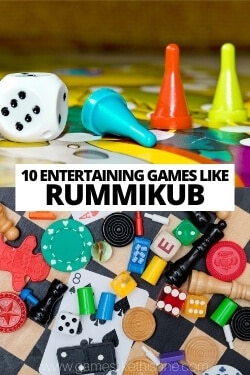