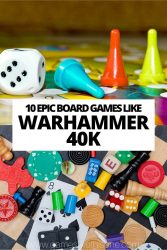 If you’re looking for board games like Warhammer 40K then look no further than this amazing list of ten titles just for you. On its ninth edition and with a never-ending parade of supplementary material being created, the buzz over Warhammer 40,000 is far from dying down. And it maintains its position as the most popular miniature wargame in the world for a reason.

The high-quality miniatures, a mixture of humans, aliens, and supernatural monsters, all wielding futuristic weaponry and magical powers keep fans of miniatures hooked on new releases. But if you’re looking for something a little different to roll out next Games Night, then the games I’ll be listing in this article are bound to pique your interest.

Runewars is a great game for people trying to involve themselves more in the world of miniature gaming. Players will use rank-and-file movement to take whole trays of their minis around the fantastical world of Terrinoth that they find themselves in.

These will be blocks of infantry, full cavalry wings, monstrous rune golems or carrion lancers moving as one to overpower the enemy. Opposing players will take up either the side of Waiqar the Undying or of The Daqan Lords and they will choose a full round of actions for their different units before getting to see the outcome of any one move.

The battle system isn’t complex but it’s tense and that makes this a great choice for a board game like Warhammer 40K.

A Song of Ice and Fire: Tabletop Miniatures Game

Taking its setting from the immensely popular series, A Song of Ice and Fire: Tabletop Miniatures Game is another game like Warhammer 40K I’d suggest. As with the show, books and graphic novels, players will be contending with a high fantasy setting and a good sprinkle of political intrigue.

They’ll play as members of the legendary houses of Westeros and go through key moments from the series such as the Red Wedding or the Fall of Casterley Rock depending on which of the numerous sets they pick up. The players will lead their miniatures in anything from small skirmishes to huge-scale wars.

Specifically with this game because of the extensive lore behind each of them, a lot of fun can be had with mixing different sets together as well.

There are few wars more enthralling than the Star Wars so you can see why they had to make a miniatures game of this. In Star Wars: Legion – Clone Wars, — an amazing game similar to Warhammer 40K — players will be battling forces in a large war.

However, this time they’ll choose from the Separatist Alliance’s unending force of battle droids or the Galactic Republic’s Clone Troopers and Jedi Knights. If that sentence wasn’t enough to get you excited then I don’t know what will.

With beautifully intricate miniatures that are easily recognisable straight out of the box, there is really no need to paint these to see what this game has to offer, but I would suggest you do anyway just for flavour.

With Malifaux, we go into the not-so-distant, not-so-familiar past. In a slightly off-kilter version of the early 1900s, two players will fight through legions of terrifying creatures in this gothic, steampunk, western mash-up.

Using the Fate Deck, they will fight for their lives and in the unending quest for the invaluable Soul Stones. The game pulls on some lengthy lore but has been updated multiple times, including a number of rule changes for optimal play and the final product is near perfect.

So next time you’re reaching for a game like Warhammer 40K, think about going for this instead. And take on the Guild, the Arcanists, the Resurrectionists, the Outcasts, the Ten-Thunderers, the Crime Syndicate, the Never-born, the Gremlins of the Bayou or whatever hellions they decide to add next.

The Lord of the Rings: Journey to Middle Earth

The unique thing about this game is that it uses an a app within the gameplay. The app can lead players through various scenarios, show enemy health, give flavour text, and can even save where sessions have ended. However, these differences from a regular miniatures game just add to its allure.

Journey to Middle Earth is a one-to-five-player game that brings Middle Earth to life with its immaculate world-building. While it can look complex from the outset, this is a game that all nerds need to have on their shelf and really should not go overlooked.

If you’re looking for a game like Warhammer 40K that also has a solo mode for when you’re feeling lonely and war-hungry, then you can do a lot worse than Fallout: Wasteland Warfare which has a customizable solo-play AI deck to control enemies.

And if you find yourself inundated with guests it also has you covered there, up to eight players can play. Each one building their own crew from a wide range of factions, allies, and iconic characters from the series.

The game follows a campaign arc but has random missions which you can choose for one-off games that still have narrative nuance and an objective to complete.

Judge Dredd: I Am the Law

Set in the dystopian megalopolis Mega-City One, Judge Dredd: I Am the Law is for two or more players and sets them up for skirmishes between Street Judges and the Perps of the City.

This is a very easy game to set up and a lot of fun to play for people who are very familiar with the franchise or those who have only watched the Dredd movie once or twice.

The heavy-handed Street Judges are ready to break some heads in the name of justice and the Perps are willing to do anything to get a leg up in this terrible city. Not that much to remember.

Players will receive their scenarios from the rule book and you can create a campaign if you’d like to link stories together for multiple sessions.

Conan is definitely a game like Warhammer 40K for an older audience and it comes with the warning right on the box for the adult moments within the game.

Each game will be a semi-cooperative scenario for two to five players, with one of them being the Overlord who has control of the forces of darkness and the others taking on the roles of Conan and his cohorts.

Then, depending on the scenario picked, the heroes will try to accomplish their goal and the Overlord will try to thwart them by moving units of baddies across the map to attack them.

This game is as gruelling and fearsome as Howard’s original work but you will feel as strong as Conan after finishing up a scenario.

Something a little different now. For fans of the Scott Pilgrim graphic novels or movie, in this game, two to four players will take on the side of Scott and his righteous buds or an Evil Ex and their tacky lackeys.

This game comes with vibrantly coloured miniatures that are truly the comic characters come-to-life, as well as fun custom dice, tokens, a deck full of call-backs and some 3D objects to be constructed and smashed or thrown at your enemies.

This is definitely a goofy game and is a fun introduction to newbies who are interested in a game similar to Warhammer 40K but not too samey. You can be sure there’s nothing else like Scott Pilgrim Miniatures the World out there.

Dungeon Alliance is another fun dalliance for board games like Warhammer 40K because it keeps the monster fighting and miniatures but this time it asks the players to build and balance a much smaller team.

One to four players will choose what they would like to include in their party, picking heroes from four of the seventeen classes to fill their spots. Then each of them will start dungeon-crawling through the modular dungeon.

They’ll have been handed the starting cards for their four heroes along with eight other random cards and with the help of this hand they will set out to destroy the monsters inside and collect their treasures. Then use the XP earned to buy more cards and repeat until sunrise.

Extra competitive types are encouraged to start fights between opposing player teams to spice up the table.

And that brings us to the end of our list of ten board games like Warhammer 40K. There was a tonne of variation this time, with games ranging from goofy to gothic and probably a few more immature titles than mature.

But everything on this list is a winner and next time you’re thinking about the next Warhammer 40K expansion purchase you’re going to be picking up you might want to try one of these out instead. It could be a new life-long obsession.

Are you searching for more games like Warhammer 40K? Have any recommendations that didn’t make the list? Let us know in the comments! 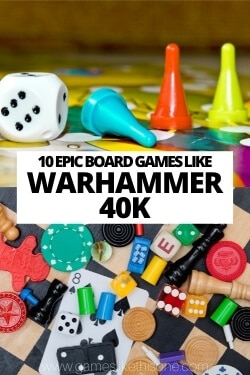