Are you searching for more great board games like Dungeons and Dragons?

Tabletop Gaming has become synonymous over the recent decades with one game and that game is Dungeons and Dragons. This empire has left no stone unturned in its effort to sink deep into mainstream consciousness, from a truly underrated but very epic cartoon to lunchboxes and keychains.

D&D had also bounded into the realms of classic gaming, and outside of its own company, it has inspired hundreds of other IPs along with its long history. Whether you’re looking for board games or card games this list has it all and will help you find the very best in games like Dungeons and Dragons.

First off we have a game that centres the part of RPGs that a lot of people will agree can be the most interesting, character creation. For min-maxxers and backstory bards alike who are looking for games like D&D this should scratch the itch.

Roll Player is a game for one to four people who will work against one another to create the greatest adventurer to have ever existed. Players draft cards and roll dice to build up the skills and traits of their characters. They’ll also need to purchase armour and weapons to get them suited and booted for a life of fantastical exploits.

Players will gain more Reputation Stars the closer they get to formulating a perfect hero and whoever gains the most will win the title of champion!

In the tradition of a number of board games like Dungeons and Dragons, Munchkin is a game that leans into the sweet role-play goodness that is levelling up. This game is for three to six players and is well-known for it’s intuitive and beginner-friendly gameplay.

Rounds play very similarly to an extremely pared-down version of encounters in Dungeons and Dragons. Players “kick in the door” to reveal a trap, monster or a safe Door Card and then when they’ve resolved that they can “loot the room”.

Based on killing monsters, or picking up special cards, players will be levelling up to try to reach 10 before anyone else at the table. While the traditional fantasy setting is what Munchkin is known for, it now sits on its own legacy of titles much like D&D and there are enough unique versions and reskins of the original game to keep anyone interested.

People who are looking for something a little quicker than the usual campaign should try their hand at 5-Minute Dungeon.

Each game includes five rounds played across different dungeons, each dungeon will only last five minutes and a party of two to five players will work together to defeat each dungeon. If players end up losing a round though, they will then have to start from the very first dungeon again and try to complete the five dungeon gauntlet once more.

Games similar to Dungeons and Dragons aren’t always able to create the high stakes energy that is familiar in combat but this one really nails it.

Gloomhaven is probably the most successful on this list at creating a board game similar to Dungeons and Dragons experience and because of that, it does have a slightly complex playstyle.

From decks dependent on level, a separate health and exhaustion measure, alternating card use; there’s a lot for players to remember so keeping the instructions on hand is a good idea. But anyone who loves D&D probably doesn’t mind keeping a manual or two on their shelf so players should adapt quickly.

Gloomhaven allows one to four players to get their fill of role-playing as their chosen adventurers make decisions in Scenarios determining the fate of the dark Gloomhaven and its neighbouring lands. This is a big box game with many moving parts and players are encouraged to run through an entire campaign together over many separate game nights.

However, Gloomhaven can be some of the most engaging board game time a Player can spend.

For people looking for card games like Dungeons and Dragons, they might enjoy this twist on the classic Dungeon setting – Boss Monster.

With a group of two to four playing against one another, players will take on the role of the monsters lying in wait for the adventuring party and build a dungeon that is equal parts enticing and deadly for the unaware heroes wandering through it.

They’ll need to defeat these heroes before they are able to finish the dungeon, wounding their Boss Character and taking their fill of treasure. If a player collects 10 Souls from unlucky heroes and manages not to collect five Wounds of their own in the process, they are the winner.

One Deck Dungeon can be played solo or with two players and is a short and fun one for people seeking out card games like Dungeons and Dragons.

Players take their hero through a dungeon looking for the Boss at the end of the journey. They will play through an entire deck each level, reshuffle and then do it again for three rounds of play before they’re finally able to get to this Boss.

While players are exploring this deck and the dungeon it will be creating for them behind its doors, players will come across traps and Creatures that they will roll and draft dice to defeat. This game is lots of fun, easy to play and works extremely well at bringing a little adventure when the party can’t get together.

For players worried that their DM is just out to TPK them, maybe consider inviting them over for a game of Descent. Any and all murderous energy can be worked out on this board. For games like D&D the similarities are obvious here.

Two to four players choose Heroes, then Classes for those Heroes and will be levelling up through the game collecting more equipment on their way until they’re the most formidable they can be. A separate player, however, will be the Overlord, and their job is making the dungeon more deadly than these heroes could possibly survive.

Utilising a number of traps, puzzles and monsters the Overlord will try to kill the other players and using their team advantage and strengths the players will try to finish the dungeon with as many of them alive as possible, gaining as much treasure as they can and achieving all the objectives set.

An older title for our list of board games like Dungeons and Dragons, Talisman is a game that sets two to six players on a journey to the Dragon King’s hoard to try and retrieve the Crown of Command. They’ll select a character through a random class pull which means players will be forced to try new things.

Different characters are better suited to different kinds of play so this will keep players on their toes but if they’re open to adaptation no one should be upset with what they get. As players traverse the board they will pull more cards from the Adventure deck which will help them build their characters out.

This can be through gaining items or fighting monsters that will fill up the spaces around them if they lose and stop them from continuing their journey to the hoard.

Near and Far is another example of those games similar to Dungeons and Dragons that do their very best to bring the adventure to their board. The box includes two books, one which holds the players’ choice of maps for the game and the other which gives storylines, along with a number of other beautiful pieces that complete the game.

Two to four players will be set out in the world to find the Last Ruin and it can be played more truthfully to the D&D tradition as a campaign over multiple sessions or on a one-shot basis.

As players do traverse the unique maps, fighting enemies and coming across story moments they’ll be forced to resolve, they will affect the game with their decisions and create a unique adventure each time they play.

The Lord of the Rings: Journey to Middle Earth

A list of board games similar to Dungeons and Dragons would be amiss not to bring up a game by one of the main inspirations for D&D we know of.

This is another campaign game however as it was released in 2019 it utilizes an app within the play to give flavour text, instruct players through scenarios, show enemy health and save where sessions have ended.

Journey to Middle Earth is a one to five-player game and uses cards, tiles, tokens and miniatures to bring Middle Earth to life. While it can look complex from the outset, the app itself is very helpful in giving the players all the information they need.

Full of all the levelling up, monster-beating and dice-rolling anyone could want, this list has loads of stuff for you to try out. With some of these titles you might want to bring your hardened adventuring party along but there are a few that will work just as well with any newbies you might want to indoctrinate into your RPG circles.

Make sure to check out anything that you do love the sound of with our links! Whether you’re feeling particularly adventure-starved and want to try something new or just love D&D enough to be reading this, these are the best 10 games like Dungeons and Dragons.

Are you looking for more games like Dungeons and Dragons? Have any recommendations that didn’t make the list? Let us know in the comments! 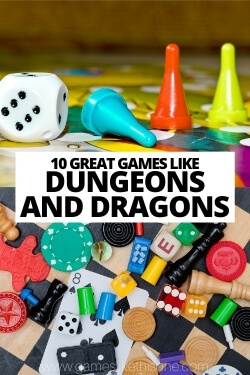