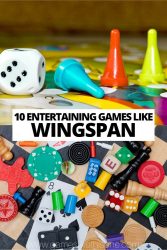 Wingspan takes intelligent and entertaining engine-builder design and melds it with the serene premise of birdwatching. So you can expect a high level of excellence in the recommendations in this list because board games like Wingspan are going to do the same.

While the first iteration of this instant classic was only published in 2019 there have already been two expansions, the Oceania and European versions. This is solely because of how popular these quirky and unassuming games have proven to be.

For fans of games like Wingspan, why not try take on a migration yourself? This one was given a glossy reprint in 2016 which has refined and reinvented it. And it definitely makes a perfect addition to any collection of bird-brained board games you might love.

It sets two players against one another as Odin’s Ravens, Muninn and Huginn, hurrying across the earth to survey the land and bring back news of all it’s secrets. Players will use Land cards that correlate to move themselves across the track and Loki cards to make mischief.

This game is a fun, short competitive one for when the bigger group fails to meet and is absolutely gorgeous to look at. The new edition’s art alone is reason enough to add it to your collection.

Like in the game Wingspan, Bunny Kingdom is about building out your collection of cute animals. These bunnies are looking to take over the place. Players will try to fill the 100 squares of board with as many warrens as they can using resources to expand (see: breed like bunnies) and build cities to increase their influence.

There are any number of different things the players will be trying to do at any one time and a multitude of strategies to implement but don’t let that scare you. The cards are very intuitive to use and the game gets more streamlined each time you play it.

It’s filled with whimsical fancy and ranks highly on my list of smart but not overly complex games.

If all this talk of wildlife has got you itching for the great outdoors then PARKS is the game for you!

This is a game for one to five and, in it, each player gets to command two hikers as they trek through the absolutely beautiful setting of the fifty-nine US National Parks. These hikers will travel for one solid year and cover four trails, each in a different season.

They’ll need to collect memories and resources to visit more parks as they continue and will be racing against one another to do so. This game is perfect for someone looking for an engine-building board game like Wingspan with the same kind of beauty to its craftsmanship and a similar calming setting.

I know I just said that PARKS had some excellent craftsmanship but this game takes “aesthetic” to a whole new level. Like the last recommendation for games like Wingspan, this one takes place over a number of seasons with everyone being able to be in different seasons at once.

In Everdell, all Players will be placing workers at events, in-board locations and on destination cards to collect resources or take special actions. They’ll keep doing this until the next season at which point they will be returned to their player’s hand and new workers are added.

Moving these workers around the board is a key part of the game for Players but so is “building your city”, laying the Construction and Critter cards, so their community can have a comfortable winter.

This game for two to four players focuses on a war for dominion over the woodland and as such has a number of different factions; the Cats, the Alliance, the Eyrie and The Vagabond. And therein lies the best thing about ROOT, depending on what faction Players choose they’ll get a completely different play style.

The Cats are on the defensive playing a logical engine-building game to try and outlive the insurrection. While the Eyrie build roosts and follow the strict rules they’ve been assigned each turn or crumble into political squabbling. The Alliance tries to reach out and grow Sympathy all across the board for a slow burn victory.

And the Vagabond? Well, this player is in it for themselves. They can play all sides of the conflict to try to complete their own personal quest cards.

This is a big, epic wargame without a doubt so it’s not a light afternoon but it always has variety and is a great one to own.

Coming away from the woodlands and going instead to a garden, I’m recommending Seikatsu.

This tile-laying board game is fun because it utilises a combative but collaborative play style for its game, like Wingspan does. One to four players will take turns placing tiles that rack up points as their garden view fills up with more birds.

They can create flocks by placing similarly coloured birds together and earn points. As well as that, players will earn points for the flowers that surround these tiles once play has finished. These points however are divvied up depending on the row that the players pagodas views.

This means that Players will need to put thought into both these stages of scoring while playing.

The next game like Wingspan, that mixes the beauty of niche interests and the natural world in a fresh and fun way is Kanagawa.

In this one, players take on the role of painting students in 19th Century Japan trying to paint a glorious panorama worthy of their Master. They will be able to place cards depicting this beautiful panorama as they learn more under his tutelage.

Bonus point cards are earnt by painting tactically and can add a level of spice when one player steals the bonus their opponent wanted. Open for two to four players, this is an easy to understand and fun to play Push Your Luck style of board game.

Architects of the West Kingdom

If you’re missing something a little more grounded in reality. Architects of the West Kingdom is our boardgame like Wingspan for those whose special interest is feudal capitalism.

One to five players will take on the role of royal architect, collecting materials to build with and set about putting their apprentices to work across the land. In this game, players morals, as well as their tactics, will be tested in this game as another thing that is measured is virtue, which can be earned or lost.

It’s easy to be tempted into stealing from that tax box if they’re sure the final tally won’t come down to virtue points. But can the players ever really be sure?

Rick and Morty: The Ricks Must Be Crazy Multiverse Game

Ok, so I wouldn’t call Rick and Morty a niche interest if I’m honest but Rick and Morty: The Ricks Mush Be Crazy Multiverse Game is an excellent engine-builder I would be remiss not mentioning.

In case you haven’t heard of this grotesquely successful cartoon it follows a super genius, Rick, and his grandson, Morty, as they go on super science adventures across the universe. This game is modelled after one of the episodes “The Ricks Must Be Crazy” and takes 2-5 players through the multiple universes that exist in Rick’s car battery.

They’ll be vying for control over the power that ekes out through the locations so that they can power their contraptions and use abilities to win. This is a weird one with a lot of moving parts but it uses its uniqueness to its advantage and is an absolute must buy.

Songbirds, like Wingspan, is all about birds. However, it’s a slightly strange little set up about winning bird dominance in the forest. Players take on the role of guiding forest spirits placing birds on to the grid tactically to try and win Nuts, which are the points in this game.

They will try to score columns and rows by having the most of their chosen bird in them, without letting the others know who they’re rooting for. Ties are penalised by none of the affected birds being chosen as the winner so there are multiple ways to try to move the needle in this game and it’s very good at keeping players on their toes.

While it can be hard keeping your poker face on while playing, the lovely imagery on the cards and the fact that everyone has taken on the role of a woodland fairy does allow for a little bit of levity in this fight to the top.

And that is our list of ten board games like Wingspan! The era of the nerdy niche interest board game is truly upon us. And I for one couldn’t be happier about it. Give me an afternoon of tranquil nature viewing in my own front room with a cup of coffee and blanket over a muddy glen in my waders any day.

If you feel the same, make sure to pick up one of these games and use the links provided in our article to do so. You’d be doing yourself a favour, giving any of these ones a try.

Are you looking for more games like Wingspan? Have any recommendations that didn’t make the list? Let us know in the comments! 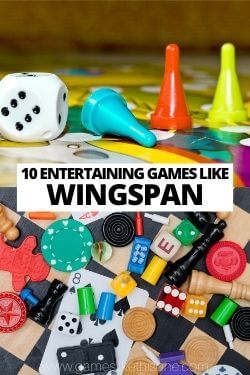