Carcassonne is a fun-fueled, tile-placement game all about creating a flourishing kingdom in a beautiful Southern French landscape and letting your Meeple lavish in its riches. The strategy of the gameplay lies between players tile placement and the distribution of their pieces to really engage you in what can be taken as a simple, fast-paced duel-like operation or a more complex thought-out strategy game.

There’s a reason it remains a staple of board game enthusiasts collections two decades after it’s release. So for our list of board games like Carcassonne we’ve tried to show you a roster that stretches from both kinds of difficulty.

The first of our games similar to Carcassonne is an even older classic, Catan. Players will be building settlements, cities and roads together on a randomly generated board hoping to take the most space they can on the island of Catan or win validations like the Longest Road token or Biggest Army token.

However, players can also choose to work together by trading essential resources and the luck of any players die can have spectacular or disastrous results for the entire board.

While the original Catan is for three-four players, an expansion is available that can allow up to six of you to play at once and other expansions take the core gameplay to new settings and franchises.

Takenoko has a beautiful Asian inspired setting and an adorable panda-focused plot that will draw in all players. It falls nicely into this list of board games like Carcassonne because of its land cultivation and the unique way it makes players work against and with one another.

Two to four players will try to keep the Emperor’s portly pet satisfied while keeping their plots well maintained. There are a lot of moving pieces in Takenoko, not least of which are the Gardener and Panda pieces players will be moving each turn to cause bamboo to grow and disappear.

Players will be placing Land-Plot tiles and irrigating them while completing the Objective cards in their hand with surprises arising from the weather at each turn. Though it might feel like a lot to keep on top of once you get into the swing of the game, it’s very easy to follow.

Kingdomino, as the name might suggest, is inspired by the parlour game Dominoes and lets players place tiles representing the different kinds of lands they want to collect around their castle.

Players will gain points for larger sets of the same landscapes and more crowns on show in their kingdom at the end of the game. This tile-laying game like Carcassonne can be played with two players or can go up to four and is a simpler title on the list.

If you’re interested but worried it might be too simple, however, there is Queendomino which is an independent sequel game with new challenges added to the playstyle. It can also be used to add more players or create bigger kingdoms to play with if you add it to your Kingdomino game.

Bärenpark, or Bear Park, is a German game that was translated following it’s rise to popularity. It’s simple but like Carcassonne leaves room for as much strategy as the players want to involve.

Two to four players will compete to create the best Bear Parks possible. They’ll fill their parks with different species and attractions for visitors by laying an assortment of tiles on their individual boards.

Covering up every space on your board is the goal but covering different icons in a certain order will allow you to pick up the right shape pieces to make sure you have no blank slots. This game is always good fun and also won’t set you back too much so is a great one to grab.

Patchwork is a combative Tetris-like board game that inspires memories of cosy afternoons and mothballs.

It pits two players against one another to create the best quilt. In this board game, like Carcassonne, the objective is to lay tiles from a common pool but this time on personal boards. players will pay for intricate Pattern Patches for their quilts via their store of Buttons and Time, which will move their Player Piece forward on the Time Track.

The game is easy to play and can become very competitive. Players can easily end the game with negative points depending on how well they complete their quilts. That difficulty along with the quirky setting makes for a perfect game to bring out whenever you’re stuck on how to entertain with just two of you.

Another one for the cottage-core at heart, Cottage Garden is for every gardener out there who wishes they had a more spacious backyard or a greener thumb. Players will try to furnish their Flowerbeds with Flower Tiles from the Nursery to score points and bonuses.

They will use cats, beehives, flower pots to help them cover the spaces and build up points. With each one that players fill up, they’ll be awarded another from the Nursery to get on with and don’t think this relaxing imagery means you’ll be resting in the sun all day.

If you wait too long while playing to fill up your flowerbeds, in the final round they might be taken away and all your hard work will be for nothing.

If you do want something that starts off a little more complex, look no further than Eclipse.

This is a sci-fi territory mapping game in which two to six players pit their civilizations against one another in an effort to rule the once peaceful galaxy! This is a huge game and is a slightly more intense addition to our list of board games like Carcassonne.

However, if you can get past the heavy set up and get into the flow of gameplay then this will fast become a favourite of anyone and everyone you have at the table.

The play is engaging and the combinations you can bring about on the heads of your other players will have you all on the edge of your seats.

If you’re looking for tile-laying games like Carcassonne, then Azul has the game all about tiles for you. Like the first one flaunted it’s illustrious late-Medieval Portuguese setting, the sequel Azul: Stained Glass of Sinatra is a board game that centres on the illuminating city of Sintra.

Two to four players take on the role of glass artisans and fill their glass panes carefully with their coloured window pieces so as not to destroy or waste materials.

The patterns available to the players are innumerable and as the players try to create specific patterns and complete sets to gain points, they’ll also be depleting the central pane pool that the other players will be pulling from.

With the correct amount of strategy and levity, this is a game that can really be enjoyed a number of times without getting repetitive and will wow you each time you open the box.

The Isle of Cats

Calling all cat-lovers! Another board game like Carcassonne I’ll be suggesting today is The Isle of Cats, which allows one to four players to take on the position of citizens trying to rescue the cat denizens before Lord Vesh arrives to pillage and destroy the adorable island.

Over five rounds players will be playing cards and filling their ships with felines and treasures. They will have to pay fish to play cards, effectively luring the cats out, and must place cat families together. They’ll also want to fill all the space they have and make sure no pesky rats are on display, that along with the lessons each player can learn will help them earn points and win the game.

The Isle of Cats has a lot of replayability and will prove a hit no matter who’s at the table.

The final game I’ll be suggesting today is Karuba, a high action game in which two to four players will be flipping over hidden tiles to try and find the perfect path to beat out everyone else around the table.

Players will send their explorer pieces along paths they create with tiles to get to temples of their same colour, however, they will only be allowed to move with the discarding of other erroneous tiles so players must be smart about what is a good and bad tile to hold on to.

And each time a treasure is found in a temple the points awarded for that treasure will diminish for the remaining players. So the pressure is on in this fast-paced strategy game.

There really are a huge number of tile-laying board games like Carcassonne out there for sale, but we know that can seem a little daunting when you’re just trying to pick up something quick so this is our tidy little list of ten for you. Make sure to use the links in it if you’ve liked anything you’ve seen today.

Whether you’re looking to spruce up your own collection or thinking of spreading some good cheer this season, any one of these is sure to put a smile on the face of whoever is playing it.

Are you searching for more games like Carcassonne? Have any recommendations that didn’t make the list? Let us know in the comments! 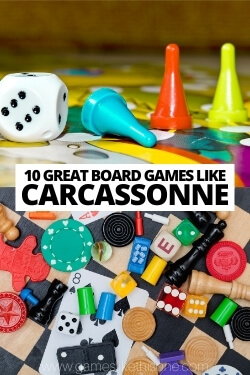