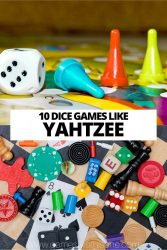 Dice games like Yahtzee have been family favourites for decades.

First appearing in the 1940s, Yahtzee has long been popular with kids and is even enjoyed by regular board-gamers looking for some light, push-your-luck gameplay. Afterall, Yahtzee is all about luck and taking chances!

So if you’re looking for dice games similar to Yahtzee, either for the family or for your group of seasoned gamers, our top ten dice games like Yahtzee will provide plenty of fresh and fun games for the table.

Dice City offers lots of dice-rolling fun for anyone looking for games like Yahtzee. The Kingdom of Rolldovia has lost its capital to barbarians and 1-4 players must compete to have their city selected as the new capital. To do so, players will build up their military, construct fantastical buildings, and open trade routes.

Everyone has five dice that they will use to gain location cards and resources that can then be used to build up their city. Vangelis Bagiartakis’s Dice City is an approachable game suitable for families – itis recommended for ages 14+ but younger kids could certainly play this with their parents too.

Regular gamers looking for a lightweight, dice-based engine-builder will find plenty to love here too.

Players will secretly align themselves with the Sheriff, the outlaws, or the renegades and aim to be the last team standing. Much like Yahtzee, players roll five dice up to three times, but in BANG! The Dice Game these dice will be used to shoot opponents, increase your shot range, or heal yourself or another player.

Combining social deduction, push-your-luck, and a Wild West theme, BANG! The Dice Game is a thrilling game that is great for families or your big game nights.

Qwixx is a fast, colourful dice game that is perfect for parents looking for family games similar to Yahtzee. Combining elements of Yahtzee and bingo, Steffen Benndorf’s 2-5 player Qwixx has players rolling six dice, two white and one for each of the four colours on players’ scorecards.

Players can mark off the coloured numbers that appear on their cards by adding a white die’s number to the corresponding coloured die’s number. These numbers must be marked off in rows and if you can’t mark off another number you’ll take a penalty!

Qwixx has the push-your-luck element of Yahtzee and is just as simple and fun for kids, making Qwixx the perfect dice-rolling alternative on family game nights.

If dice games like Yahtzee are favourites at the games table but you’d enjoy a fantasy spin, Roll for Adventure is a fun, co-operative game that both families and regular gamers will enjoy. Designed by Matthew Dunstan and Brett J. Gilbert, this 1-4 player game has players working together to save the kingdom.

You must defeat the Dark Lord by collecting gems to complete the magical amulet necessary for his demise. The kingdom is made up of four lands that require specific dice rolls to find their magical gem. But watch out – monsters will attack these regions each turn.

Once again, players must use their dice to defeat these creatures, but if even one land is conquered by the Dark Lord the players immediately lose the game. Roll for Adventure is a lightweight, puzzle-solver that offers just the right balance of strategy and luck.

If you love dice games like Yahtzee but are looking for a step-up in complexity, Age of War is the perfect push-your-luck dice-roller that can be played in less than 30 minutes! 2-6 players compete by controlling their armies, conquering regions and castles, uniting clans, and gaining victory points.

Designed by Reiner Knizia and with beautiful art by Simon Eckert and Tony Foti, Age of War is a fun twist on Yahtzee with players sacrificing a die in order to roll again. Casual gamers or families with teenagers will be sure to love this elegant dice-chucker.

A.J. Porfirio’s Hostage Negotiator is a quirky solo game and a great addition to your games collection if you’re looking for dice games similar to Yahtzee. You take on the role of a hostage negotiator, dealing with an evil criminal who will not back down unless their demands are met.

Each turn in the game is a conversation between you and the hostage-taker. By rolling dice and crafting your hand of cards, you can improve the conversation, reduce the threat level, and free hostages.

Successful dice rolls mean a successful negotiation, but bad rolls can result in increased threat, angering the hostage-taker, and even the death of hostages.

Hostage Negotiator is a challenging game that will leave you scratching your head as you try to leverage the hostage situation in your favour. Plus, with various routes to success and multiple criminals to choose from, Hostage Negotiator has lots of replayability.

Roll Through the Ages: Iron Age

Roll Through the Ages: The Iron Age takes many of the mechanics of Yahtzee but also lets you build an ancient empire! As a leader of a great civilisation, you and up to 3 other players will build provinces, develop technologies, manage your resources, and conquer territories.

Gamers looking for dice games like Yahtzee will spot many similarities in Thomas Lehmann’s Roll Through the Ages: The Iron Age.

You will use dice to gain resources from your provinces with the option for re-rolls and an element of pushing-your-luck. These resources are then used to resolve disasters and battles, build ports and armies, and create new technologies.

This simple but rewarding game will be a favourite with history buffs whilst being lightweight and approachable enough for all sorts of gamers.

Each player leads a Viking clan in the realm of Midgard. These clans have travelled to the port-town of Trondheim, which they must defend against trolls and other Norse monsters.

Defeating these beasts will earn the players glory and favour from the gods and the player with the most glory at the end of the game is declared the ruler of Vikings and the winner! Combat dice are rolled to defeat monsters whilst workers are placed to gather all-important resources.

With gorgeous art by Victor Perez Corbella, Champions of Midgard is a fantastic, mid-weight, Viking-themed game.

If you love pushing-your-luck in Yahtzee and enjoy bluffing games, Dicey Goblins could be your new favourite game. This 3-6 player dice game, designed by Steve Ellis and Tyler Tinsley, is a simple but hilarious take on dice-chuckers that anyone looking for games similar to Yahtzee will adore.

Players are goblins trying to steal valuable dragon eggs. Each round, dice are drawn randomly and their colour determines how likely the goblins’ mission will be successful. Will they snatch lots of precious eggs? Or will the dragon awaken, causing them to flee empty-handed?

The players will then secretly decide whether they will raid or run. If only one goblin runs, they will get plenty of eggs, but if lots of the goblins run the treasure is split, leaving you with very little. If you decide to raid, you might be able to explore deeper into the dragon’s lair, find more eggs, or, if you’re unlucky, awaken the dragon.

This is an easy-to-pick-up, dice-chucker that friends and families will love as they try to suss out what the other players will do each turn.

Roll Player is a Dungeons & Dragons-inspired dice-rolling game that those of you looking for games like Yahtzee will be sure to enjoy.

You and up to three other players are tasked with crafting the perfect RPG hero. You will roll and draft your dice to give him or her adventurous attributes, powerful weapons and armour, and vital skills, all whilst building up their reputation. The player whose hero has the greatest reputation wins!

Designed by Keith Matejka, Roll Player will capture the imagination of regular gamers whilst being simple enough for players aged 10 and up.

Fans of D&D will love crafting their perfect heroes, which includes selecting their race and class. And lovers of Yahtzee will enjoy carefully drafting their dice for maximum success.

From simple, family-friendly dice-rollers to elegant, dice-driven board-games for your regular game nights, these dice games similar to Yahtzee offer fun, fresh, and exciting alternatives to the dice-rolling classic.

Are you looking for more games like Yahtzee? Have any recommendations that didn’t make the list? Let us know in the comments! 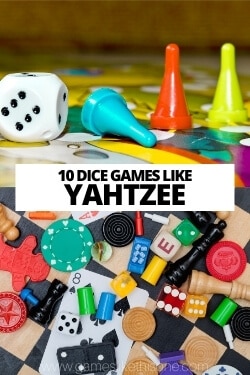