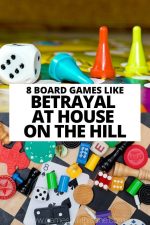 Story-based board games like Betrayal at House on the Hill are wildly popular for a reason — they are exciting, interesting and interactive and keep all players guessing and on their toes. Betrayal at House on the Hill and other games like it are incredibly fun to play by just how much collaboration and brainpower is needed to get through to the end.

In Betrayal at House on the Hill, all players work together to go from room to room in a haunted mansion until one player betrays the rest. No one knows who this will be — not even the betrayer themselves! Players must work collaboratively to come up with a strategy to get out of the house alive and to thwart the betrayer.

If you’ve played this game a few too many times or just want to add some other tabletop games to your collection, then you’re sure to love these eight great games similar to Betrayal at House on the Hill!

The game can be a bit complex and multifaceted, however, the concept is generally fairly easy to understand. Arkham Horror is based in the fictional city of Arkham during the 1920s, however, in this universe, there are aliens who are lurking in the shadows and threatening to break into human life.

It is your job as the players to prevent this from happening, however, you can surely expect a betrayal in your midst at some point during the game!

Arkham Horror is a fun and spooky game that is sure to delight fans looking for something similar to Betrayal at House on the Hill.

Betrayal at Baldur’s Gate is set in a spooky medieval city where evil spirits have descended up it. The goal of the game is to vanquish these evil spirits by working collaboratively with your playmates, however, much like in House on the Hill, there is going to be a devastating betrayal.

There are over fifty different scenarios that this game could follow so it’s not something that you’re going to get bored of easily meaning that it’s a sure choice for those looking for more games like Betrayal House on the Hill.

Billed as a meta-cooperative psychological survival game, Dead of Winter is an excellent board game to play if you’re looking for something that’s similar to Betrayal at House on the Hill.

Based in an apocalyptic future where the majority of the world’s population has died or been turned into zombies, players in this game are part of small factions of people who are trying to survive said zombies in, you guessed it, the dead of winter.

There are countless curveballs that can be thrown on you and numerous different scenarios that can be played out, making this an excellent game for anyone who likes collaboration or survival games, in general.

The premise of Mansions of Madness is that each game takes place inside an already-established story where there is a unique map and different plot points. Players must work collaboratively within the story to thwart monsters with the inevitability that there will be a betrayal at some point throughout the game!

Mansions of Madness can be played with 2 to 5 people and takes about two to three hour to complete in its entirety, so don’t start this game unless you ave a fair amount of time to commit to it!

Love the horror tropes that Betrayal at House on the Hill explores but are tired of the haunted mansion setting? Then you’re sure to enjoy playing Fury of Dracula — a vampire-based collaborative horror game that is always fun and exciting.

The general concept of this game is quite simple, however, it is a whole lot of fun to play and it is sure to keep you entertained and having a good time.

The game is set in day and night rounds and the goal of it is to defeat Dracula before he strikes and eliminates every single player! There are attack strategies and numerous curveballs thrown in to keep it dynamic and interesting, as well.

Fury of Dracula, like many of the other games on this list, takes about two or three hours to play in its entirety so make sure to set aside a significant amount of time to dedicate to it!

All in all, if you love Betrayal at House on the Hill but are looking for something just a little bit different, then you’re sure to enjoy Fury of Dracula.

Set in Whitechapel, London in 1888, the goal of the game is to investigate and catch the notorious Jack the Ripper before he kills five people. One player amongst you is Jack and the others are investigators with Scotland Yard, however, no one knows who is the killer!

The investigators must stay one step ahead of Jack in order to prevent the loss of more innocent lives and everyone must work together to catch him — which can be tricky when Jack is trying to pull you off his trail!

So if you’re looking for a game that is like Betrayal at House on the Hill, make sure to consider playing Letters from Whitechapel — you’re sure not to be disappointed!

Next on this list of board games like Betrayal at House on the Hill is a classic that you’re sure to have played in your childhood: Clue.

While this may seem like an obvious, simple or juvenile addition on this list, I urge you not to jump to conclusions and to harken back to the days when this was the most fun game you would play with your family.

Clue is a lot like Betrayal at House on the Hill in a number of ways. First off, it takes place in a weird mansion with a bunch of quirky characters. There is also the caveat that one amongst you has betrayed the others, but you don’t find out who until much later in the game. Though it may not be as complex, Clue is also a fantastic game for those looking for something a bit more family-friendly that does also appeal to all ages.

So if you’re feeling nostalgic and want to throw accusations like “it was Mrs Peacock in the ballroom with the candlestick!” at your fellow playmates, then you’re sure to love playing Clue at your next game night.

And finally on this list of great games similar to Betrayal at House on the Hill comes Gloom, a game with an interesting concept that is a bit of a departure from the investigatory or fantasy elements of the other games, but is sure to entertain and delight all those who play it, regardless.

This game is a bit shorter and easier to play than many of the other games on this list, however, that doesn’t mean that it is any less unique, fun and complex!

Gloom is based on the premise that you are a member of an unconventional family that has one bad thing after another thrown at them, and your goal is to have your characters suffer the most amount of tragedies and hardships while also guiding them toward death.

While this may not be the happiest game in the world, you may not have expected that with a name like Gloom. The entire game takes about an hour to play and due to its heavier subject matter, probably not best for those under age 13 to play.

All in all, however, if you’re looking for a unique game to play that is like Betrayal at House on the Hill, then Gloom is a good choice.

Finding games that are similar to Betrayal at House on the Hill isn’t so dificult as there are so many great, dynamic collaborative games to choose from! Honestly, the most tricky thing about it is figuring out which of these eight great games you’re going to play first!

Are you on the hunt for more games like Betrayal at House on the Hill? Have any recommendations that didn’t make the list? Let us know in the comments! 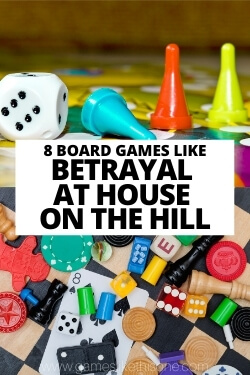