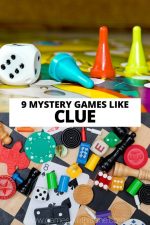 “It was Mrs White in the Dining Room with the Candlestick!” Phrases like this are sure to envoke nostalgia of fun family game nights of playing the classic mystery game that is Clue. However, sometimes playing the same game that you’ve been on since childhood can be a bit tiring and if you’re interested if minding more mysterious guessing games like Clue to play with your family, then look no further.

Social deduction mystery games are one of the most popular genres of board games that people like to play. Therefore, there are countless mystery board games like Clue that will take you and your friends and family on a “whodunnit” journey that is sure to be full of fun and excitement.

So if you’re looking to amp up your game night, then have a look at these 10 great mystery games similar to Clue.

If you’re searching for an exciting and riveting mystery board game like Clue in order to spice up your family game nights, then you can’t go wrong with picking up a copy of Mr Jack.

Set on the premise of solving the Jack the Ripper murders in 19th-Century London, this mystery game only accommodates two people, meaning that it is a great option to play if you have fewer people than required for Clue.

One of the two players is Jack the Ripper and the other player is an investigator. There are a lot of other variables in the game that allows Jack not to be caught for the murders and, by the end of the game, he is either caught or not and that is how you determine who wins.

So if you only have two people and are looking for fun games similar to Clue, then Mr Jack is a great option for you.

If you like Clue for its concept of solving a crime and using you power of deduction to pick out clues, then you’re sure to love Scotland Yard.

Based in the streets of London, this board game is a collaborative mystery game where the majority of the players work together to find the criminal “Mr X” whose identity is only revealed at a handful of times throughout the game.

This mystery board game can accommodate anywhere from 3-6 players and it takes about an hour to get through an entire game – depending, of course, on the number of players.

The board is a beautiful map of London and the game is engaging, collaborative, and a whole lot of fun and is sure to mix up your choices if you’re getting a little bit tired of playing Clue over and over again.

One of the best mystery board games out there, Mysterium is an excellent choice for those looking for games similar to Clue. A favourite amongst mystery and social deduction game nerds for some time now, Mysterium is a complicated and entertaining board game that is sure to delight.

The premise of the game is that you are in a haunted house in the 1920s and one player is the ghost and the rest of the players are mediums, trying to find and catch the ghost.

Each turn, the mediums draw ‘vision cards’ which gives them various powers to be able to figure out how to catch the ghost.

Much like in Clue, the medium has to guess the person, location, and weapon that the ghost is using to be able to win the game.

The game takes about 40 minutes to play and it is great at using clues and evidence to deduce an outcome while also encouraging collaboration. So if you’re interested in finding some more great mystery board games like Clue, then make sure to add Mysterium to your collection.

Betrayal at House on the Hill

If you love Clue but want something a bit more creey and quite a bit more complicated, the consider picking up a copy of Betrayal at House on the Hill.

In premise, this game is very much like Clue, however, it is definitely better for older players and it is a great game like Clue for an adult or more mature audience.

The general concept of the game is that players are in a haunted mansion, and with each turn, they are able to explore more rooms of this creepy place where they happen to be.

Certain powers and abilities may manifest themselves depending on the room they’ve explored or the cards they have drawn and, eventually, there comes a point where a traitor will reveal him or herself and, many times, you won’t realise this until too late!

What is fun and different about this game rather than many other games of this type, is that the traitor has no idea that they are, in fact, the traitor. This is likely the most complex game on this list, however, it is still a very fun and dynamic game that is sure to entertain anyone who may want to try their hand at playing.

Betrayal at House on the Hill can accommodate up to 6 players and it takes about an hour for the game to finish.

Already know and love this game? Check out our list of games like Betrayal at House on the Hill!

Another game that is set around the Jack the Ripper murders, Letters from Whitechapel is an excellent board game to pick up if you’re looking for mystery board games like Clue.

This game, which can accommodate 2-6 players and can take over an hour to complete, is a great mystery “whodunnit” game that is sure to delight older fans of Clue.

The premise is fairly simple – one player is Jack the Ripper, and his goal is to take and murder five of the other characters without being caught. If he does this, then he wins the game.

The other character, which vary in identity, are committed to catching Jack the Ripper before he can murder anyone.

Generally appropriate for ages 14 and over, Letters from Whitechapel is a great game to play if you’re looking for something similar to Clue but for an older audience.

If you like Clue but would rather the setting be in a more “realistic” crime-solving setting rather than a creepy mansion or fancy party, the Police Precinct is a great game for you!

The general premise of this collaborative mystery game is very simple: there has been a murder and the players — characters in a police precinct, aptly — are trying to solve it.

Everyone will have a different identity and, to further complicate things, one of the players will be corrupt and may provide misinformation on the murder to cover his tracks.

Police Precinct can accommodate up to 6 players and it will take about 90 minutes to get through the whole game. It is also the perfect game if you’re looking for more modern mystery board games like Clue.

Love Clue for its classic mystery-solving properties? Then you’re sure to be excited to embark on a board game adventure based on literature’s most beloved detective: Sherlock Holmes!

Sherlock Holmes Consulting Detective is an excellent mystery board game to play as it skillfully recreates some of the most popular Sherlock Holmes mysteries and allows you and your friends to solve them.

The game can accommodate up 8 players and there are lots of iterations and different mysteries that you can solve within it. This makes it a different game each time you play it and can keep you entertained and on your toes.

Depending on how many players you have and which scenario you choose to play, the game can last anywhere for 1-2 hours — enough time to ensure you never have a dull game’s night!

So if you’re looking for that perfect mystery game similar to Clue, look no further than Sherlock Holmes Consulting Detective.

If you’re looking for a mystery game like Clue but that is easy to take on the go or on a holiday, then Sleuth is a perfect option for you.

This mystery and deduction card game is perfect for anywhere from 3-7 players and it can take about 30-45 minutes to play. Because it is a card game and not a board game, it is also the ideal game to take with you on family holidays and not have to worry about taking up too much valuable space.

The objective of the game is fairly simple: players eagerly search for a hidden gem and have to guess about what it is based on cards they are dealt.

Much like in Clue, the game gets easier the longer you play as the options start to run out, but you have to meticulous and observant about which options have already been guessed if you want to learn what the hidden gem is before the other players.

The first player to guess the hidden gem wins. So if you’re looking for fun guessing and deduction games like Clue, Sleuth is a great option for you!

If you love Clue for its whodunnit qualities, then you’re sure to love Mystery Express. This is the perfect game for those who are looking for games like Clue because it is very similar to the classic board game.

Mystery Express is basically a recreation of Clue except, rather than being in a mansion, you are on a classic train like something out of an Agatha Christie novel. The concept of the game is that there is a murder on the train and various players must figure out who among them did it.

If you are looking for a change of scenery from Clue and are interested in switching up the characters, then Mystery Express is a great option for you!

Finding great mystery board games like Clue isn’t all that difficult as the genre is so increasingly popular. So if you want to have an exciting night of finding clues and deducing mysteries, then these games are sure to delight!

Are you looking for more games like Clue? Have any suggestions that didn’t make the list? Let us know in the comments! 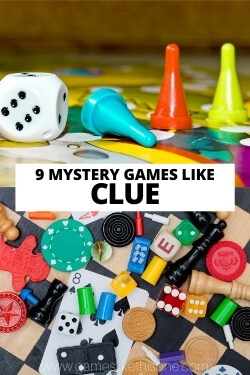