First released on the crowdfunding platform Kickstarter and, to this day, one of the most successful items to have graced the platform, Exploding Kittens has surged in popularity since it’s release. But if you’ve had enough of explosions and kittens and are on the hunt for more card games like Exploding Kittens, you’ve come to the right place.

Known for being fast-paced and easy-to-learn, Exploding Kittens combines whimsy with a lot of fun and it is a great game to play with adults or children alike.

However, if you find yourself playing this game over and over again and now would like to find some card games similar to Exploding Kittens, make sure to check out these top suggestions.

Though this game is certainly no stranger for family game nights, if you’re looking for more card games like Exploding Kittens, then you can’t go wrong with returning the tried and true favourite, Uno.

If you’re unfamiliar with this game, it’s a pretty simple concept, is very easy to pick up and rounds can be played in under fifteen minutes.

So if you’re looking for a quick, fun and easy card game to play that can be just as exciting as a round of Exploding Kittens, then Uno can be a great choice for you!

The great thing about Uno is that it can be played with anywhere from 2 to 4 players and is great for ages six and up, meaning that it’s the perfect family-friendly game! So if you’re wanting to mix up your game nights, consider reintroducing Uno back into play!

A fun, easy and colourful card game that is sure to delight you just as much as Exploding Kittens is Sushi Go! A round of this unique game can be played in about 15 minutes, it is fun enough for kids and grown ups alike, and the artwork on the cards is something that just makes the game better!

Sushi Go! is goes very quickly and it super easy to pick up, which means that it’s a game that is fun for kids as well as adults.

The premise is that all players get dealt a hand of cards that have various types of sushi on them, such as salmon nigiri, sashimi, maki rolls, etc. Each card (or sushi dish!) is worth an assigned point value and the goal is to make as many pairs of valuable cards with each turn in order to win the game.

Sushi Go! can accommodate up to five players and is perfect for everyone ages eight and up, making it the ideal family card game to incorporate into your repertoire.

Love the explosion side of Exploding Kittens? Well, then Hanabi may be a great option for you! This game is unique and interesting to play, and also quite fast-paced, so it is the perfect card game to play if you’re looking for something fun to pass the time.

Unlike the rest of the games on this list of card games similar to Exploding Kittens, Hanabi is actually collaborative so you and your playmates either collectively win the game or collectively lose.

The premise of this game is also very simple, you and your teammates are tasked with putting up the perfect firework show. With each move, your mates must urge you to choose the right card (players can’t look at the cards they have in their hands), to draw the right one and void a fatal explosion.

A bit of a different concept than other games, this is yet another card age that is fun for both adults and children alike and is perfect for ages eight and up. It also can accommodate up to five players.

If you’re looking for a fun and dynamic card game that incorporates elements of social deduction in a dystopian future universe, then Coup is an excellent choice for you!

This card game is a bit more complex than the other games like Exploding Kittens on this list, however, one round can still be completed in about fifteen to twenty minutes and it’s good for older kids and very fun for adults.

The general premise of the game is as follows, each player is assigned two identity cards that correspond with roles of high-ranking members of a totalitarian court. These people are always vying for power.

Your opponents don’t know what your identity is and it’s in your best interest to deceive them so you can come out on top. Each identity has different powers and with each turn, you can use these abilities to make an action play to advance your “influence” within the realm of this game.

A fun and dynamic game that will leave you guessing, Coup is also very easy to learn so it is sure to soon become one of your favourites. Accommodating two to six players, this game is best for those ages thirteen and up.

Another card game with elements of social deduction, Love Letter is the perfect option for those looking for some card games like Exploding Kittens. If you’re looking for something that is incredibly simple to play, easy to learn, yet lots of fun, then this game is the one for you.

Set in a fictitious court, the goal of the game is to deliver a love letter to the princess, who has locked herself in the tower. Each player must draw different identity cards form the deck and with each turn, either helps or hinders your ability to deliver the letter to your love.

You don’t know who is who in the game and some identities are better than others, but the game is quick and can be played in less than twenty minutes per round. It is also a very small game, meaning that it’s perfect to take on the road or to pack in a suitcase.

Great for two to four players and fine for ages ten and up, Love Letter is an excellent social deduction game that is tonnes of fun that is sure to entertain you just as much as Exploding Kittens.

If you’re looking for a card game to take the place of Exploding Kittens but want something with maybe a bit more strategy, then you can’t go wrong with Jaipur. This card game, set in an Indian market, is a great game to play if you only have two people but want a quick and easy game to pass the time.

The premise of the game is super simple, you and your opponent are traders at a market and the goal is to end up with the most rupees by the end of the game.

There are a number of different products that you can trade in the marketplace, all with different point values. Each turn, you have to either buy, sell or trade something in order to get ahead.

Though there are no kittens and no explosions, there are camels and gold coins involved, making Jaipur a great game for those looking for a card game similar to Exploding Kittens. The game can only accommodate two players and is good for ages twelve and up.

If you like Exploding Kittens but are keen to foray into the world of well-received and notable card games, then you really can’t go wrong with Dominion.

This card game is one of the most popular amongst board game enthusiasts and there are countless expansion packs meaning that, as you add to your Dominion cards, you may never play the same game twice.

The game concept is actually relatively simple and gets more complicated as more cards with different abilities are introduced. The general idea of the game is you are a ruler of a small area of land and you need to keep building it up in order to win the game.

There are numerous different cards that you can add to you deck that are available in the marketplace, you can attack other players and you can even buy money and estates. Though there are lots of different ways the game could go, the player with the most points by then, wins.

Dominion is definitely a game that’s perfect for those who are looking to get a bit more into really complicated card games. While it isn’t as exciting or straightforward as Exploding Kittens, it is still a tonne of fun and you’re sure to enjoy playing it!

Dominion can accommodate four players (but can be adapted to play up to six) and it is best for ages thirteen and up.

And finally, we round out this list of great card games like Exploding Kittens with everyone’s favourite party game, Cards Against Humanity. This game (for adults only!) is one of the most popular card games out there, is incredibly simple to play, and is sure to leave you laughing out loud and feeling very uncomfortable.

Billed as the “party game for horrible people,” Cards Against Humanity is an adult version of Apples to Apples and is one of the most fun things that anyone could bring out at a party. Each player is dealt a hand of cards with various phrases or words on it.

With each turn, alternating players become the “Card Czar” and draw from another deck with a phrase that needs to be completed. Working form your own hand, you select the card of yours that you believe best completes the phrase — whether that be for logical reasons or comedic ones.

The Czar then chooses the card he/she deems the most fitting and the player who chose that card gets the point. At the end of the game, the player with the most points, wins!

Filled with completely inappropriate things, Cards Against Humanity is a game that will certainly allow you to know your friends in ways you never had before. Riotously fund, it is also the perfect game for adults looking for something similar to Exploding Kittens.

As you can see, there are countless card games similar to Exploding Kittens that are sure to leave you and your friends entertained and having fun for many game nights to come.

Are you searching for more cards games like Exploding Kittens? Have any recommendations that didn’t make the list? Let us know in the comments! 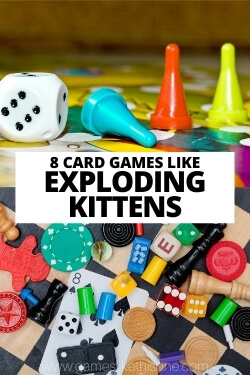