So you’ve been bitten by the Gloomhaven bug, but you’ve finished the campaign or you’re after an alternative on games night so now you’re looking for other board games like Gloomhaven?

Gloomhaven has been one the biggest board games on the market since its release in 2017 – and I really mean big, the box alone is huge! Isaac Childres’ co-operative, fantasy campaign game is perhaps the most expansive board game ever, offering players the RPG experience with excitement and surprises along the way.

Whether it’s the rich campaign story, the co-operative gameplay, or the dungeon-crawling theme that you love about Gloomhaven, these ten games like Gloomhaven will cover all your table-top gaming needs.

Descent: Journeys in the Dark

If you love dungeon crawling with friends in Gloomhaven, you will also love doing the same in Descent: Journeys in the Dark (2nd edition).

From Fantasy Flight Games, Descent is a co-operative, scenario-based, 2-5 player campaign game like Gloomhaven – except for one player who will take on the role of the Overlord, determined to ruin the best-laid plans of the other players.

Embarking on fantasy adventures in dungeons, ruins, caves, and forests, the players have a specific objective for each scenario that must be achieved to progress the story. The combat system is driven by dice and, like Gloomhaven, players get their own unique character miniature on the board.

Players who enjoyed the detailed art and figurines of Gloomhaven are sure to love the same in Descent: Journeys in the Dark (2nd edition) by Alex Aparin and co. The second edition of Descent was released in 2012 and offers players a more streamlined game than the first edition and a wealth of expansion games to choose from.

Once again, you and your friends will be called upon to save a kingdom in peril in Mice and Mystics.

If you enjoy co-operative, fantasy games like Gloomhaven and are looking for a lighter and, importantly, adorable game, Mice and Mystics, a 1-4 player game from Plaid Hat Games, is a fantastic addition to anyone’s game library.

Players have been turned into mice and must battle through a huge castle full of spiders, rats, and, worst of all, the castle’s cat. There is a fun storyline to follow throughout your games, giving Mice & Mystics a similar adventure-feel to Gloomhaven but with a simpler dice system.

This is a great game for regular gamers and also my top recommendation for families looking for a lighter alternative to Gloomhaven.

The Lord of the Rings: Journeys in Middle-Earth

Fans of Gloomhaven will find plenty to love in The Lord of the Rings: Journeys in Middle-Earth. This 1-5 player adventure game from Fantasy Flight Games will tick lots of boxes if you’re looking for games similar to Gloomhaven.

Following a campaign story based on Tolkien’s The Lord of the Rings, players become any one of your favourite LOTR characters to adventure through Middle Earth together and defeat the evil forces at work. The free companion phone app is needed to play this game, but this also helps keep things streamlined and easy for players.

The character decks will give a similar feel to Gloomhaven as will the high-quality figurines. If you want to bring together your love of Gloomhaven and the world of Middle-Earth, The Lord of the Rings: Journeys in Middle-Earth will satisfy your gaming needs for the whole adventure.

5 Minute Dungeon, the hit game designed by Connor Reid, does what it says on the tin — battle your way through a dungeon in just five minutes!

If you like Gloomhaven for its Dungeons and Dragons theme and co-operative gameplay but wish you could do it all in a fraction of the time, 5 Minute Dungeon is a great micro-game.

Fast-paced, with real-time fighting and tense battles, 5 Minute Dungeon is small enough that you can carry a tiny, chaotic dungeon around to play with any time. 2-5 players work their way through an increasingly difficult series of dungeons, monsters, and boss battles, and the short playtime makes this a great game to kick off games night.

Are you looking for board games similar to Gloomhaven that up the complexity? Mage Knight, designed by Vlaada Chvátil, is an intricate blend of traditional role-playing games, deck-building, and strategy.

You and up to three other players are Mage Knights, exploring and conquering the Atlantean Empire. Mage Knight has competitive, co-operative, and solo scenarios, so it is up to you whether you will ally or compete with other players for power.

Fans of Gloomhaven will love the immersive and creative world-building and regular gamers will find the elegant deck-building and exploration mechanics of Mage Knight a fresh and rewarding challenge.

If you’re after more games similar to Gloomhaven, Legends of Andor, designed by Michael Menzel, offers an enjoyable alternative. This is a co-operative, fantasy campaign, where 1-5 players – playing as an archer, dwarf, elf, warrior, or wizard – must defend the realm of Andor against encroaching hordes.

Fans of Gloomhaven will like Legends of Andor’s adventurous stories and world-building, and whilst the game does not have nearly as much content as Gloomhaven, the Legends of Andor website offers plenty of bonus material to play with.

The legacy sequel to the hit game, Aeon’s End: Legacy offers an exciting fantasy campaign sure to appeal to Gloomhaven fans. You and your fellow players are mages, determined to defend the city of Gravehold against strange and magical forces.

You will build a deck of spells, relics, and crystals to launch attacks against your enemies and defend your companions. Aeon’s End: Legacy, designed by Nick Little and Kevin Riley, is a co-operative game where 1-4 players battle against a terrifying monster and its minions.

Legacy offers an additional campaign element to the first Aeon’s End board game, but it does not require owning or playing the original game. The campaign is not as creative as Gloomhaven’s inventive storytelling, but the gameplay is intense and rewarding for all.

If you’re looking for games like Gloomhaven that offer co-operative gameplay and tense scenarios, the hugely popular, app-assisted Mansions of Madness could be your next obsession. This H. P. Lovecraft-inspired game is set in the same universe as other Fantasy Flight games Eldritch Horror and Elder Sign.

You and up to four more players will investigate an eerie mansion, guided by the free phone app needed for this game, risking your lives and sanity.

Mansions of Madness has great replayability – the board changes with every game and players will never know what to expect in these haunted mansions, except for plenty of puzzle-solving and monster battles.

Lovers of thematic games like Gloomhaven that are packed with tension and story will find plenty to love in Mansions of Madness.

If you just can’t get enough of the world of Gloomhaven but are looking for an entirely different gaming experience, Founders of Gloomhaven could be your next game. The setting is a prequel to the action of Gloomhaven — you are building the city of Gloomhaven, competing for resources and influence.

This is a resource-management, tile-placement game, where 1-4 players compete and negotiate with each other since some resources will be controlled by your opponents.

The complexity is high and best-suited to regular gamers, who are sure to enjoy the intricate mechanics of Founders of Gloomhaven whilst getting a dose of Gloomhaven-themed gameplay (including some nods to events of Gloomhaven’s campaign).

R. Eric Reuss’s Spirit Island has gained a reputation as the ultimate co-operative board game. If you loved working together in Gloomhaven to defeat your enemies, then joining forces as magical spirits trying to fight off colonising invaders will be even more fun.

You and up to three other players will choose your character (a spirit of the land) and select cards from your unique hand to hinder or frighten invaders and assist the islanders.

The gameplay is as complex and satisfying as Gloomhaven, and although it does not have a campaign element, Spirit Island offers enough setups and different enemies to give the game plenty of replayability.

Finding games similar to Gloomhaven may seem difficult – what could compare to the wealth of storytelling and gameplay this mammoth game offers. In reality, however, there are plenty of games out there, including all of the above, that will give you the same richness, replayability, and riveting gameplay as Gloomhaven.

Are you searching for more games like Gloomhaven? Have any recommendations that didn’t make the list? Let us know in the comments! 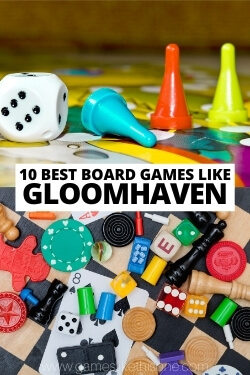