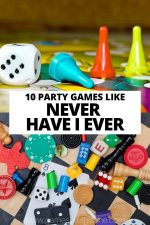 Party games like Never Have I Ever have been popular for ages for a reason — they’re fun, rowdy and get really break the ice and get a party started. However, one of the most frustrating things when playing this game is, especially after a few rounds, coming up with experiences off the top of your head.

That’s why the physical version of Never Have I Ever with cards with ridiculous and hilarious circumstances listed on them has revolutionised the party game.

But if you’ve gone through all of the scenarios of that game or are just on the hunt for more games similar to Never Have I Ever to mix it up and continue laughing and having fun with your friends, then you’ve come to the right place.

These games like Never Have I Ever are sure to entertain you and fill you parties with laughter and hilarity.

First on this list of games like Never Have I Ever comes Drunk, Stoned or Stupid. A fantastic party game, this one bills itself that there are no winners — only losers. Regardless, you’re sure to have a great time playing this outrageous game!

The general concept of the game is quite simple. On alternating turns, one of the players acts as a judge. The rest of the players draw a card with a ridiculous action on it and it is read allowed.

The judge then decides which of the players is most likely to do said action and then that player is rewarded the card. The first player to reach seven cards “loses”.

Of course, no list of party games similar to Never Have I Ever would be complete without including the mother of all raunchy adult card games, Cards Against Humanity. And, unless you’ve been living under a rock for the past decade, it’s likely that you’ve played or at least have heard of this game.

But here is a bit of a refresher if you haven’t ever played this epic game or it’s just been a while. Each turn, there is an alternating “card czar.”

There are two decks of cards in play. The first is a white deck that is dealt out in a hand to each player. These have various words or phrases that can complete the phrases that are on the black deck of cards.

At the beginning of a turn, the card czar will draw a card from the black deck and then the rest of the players complete the phrase to the best of their abilities from the cards in their deck.

The czar then decides which card is the most relevant and whomever’s card that is, wins the round. The player who wins the most rounds, wins the game.

All in all, if you’re looking for an outrageous party game that’s similar to Never Have I Ever, then Cards Against Humanity is a great choice.

What Do You Meme?

Another perfect party game that is sure to leave you laughing and having a great time is What Do You Meme? Perfect for those looking for party games similar to Never Have I Ever, this game has you matching captions to memes for an evening of hilarity.

The concept is simple and quick to pick up – the perfect recipe for a party game, especially if you’ve already had a few drinks!

Basically, it’s similar to Cards Against Humanity except instead of completing phrases, you caption memes. And the results are always hilarious!

What Do You Meme? has soared in popularity since its introduction and it is the perfect game to bust out at a party with your friends, especially if you’re sick of Never Have I Ever but want something along the same lines.

Know and love this game already? Check out our list of games like What Do You Meme?!

If you like the fact that Never Have I Ever is a public domain game that was put into a card game form to help you from running out of ideas, then you’re sure to love Monikers.

Based off the game Celebrity, this is the perfect party game if you want to be fun and interactive with your friends.

If you don’t know how the game works, basically, players split into teams and at the beginning of every turn, one player will draw a card with a different celebrity’s name on it. It is then the player’s job to give clues or act out who this person is without saying their name.

What’s really fun about this particular version of this game is that, in the last round, players aren’t allowed to give verbal clues as all and must communicate the celebrity using only gestures.

This is all timed and the team who gets the most celebrities right at the end of the game wins!

While everyone’s idea of a fun way to spend an evening out with friends pretending that you’re applying for jobs, Funemployed, a fantastic game to play if you’re looking for games like Never Have I Ever, has you do just that.

However, it is necessary to pay attention to the “fun” part of the game’s name because this is a game that is filled with laughter and hilarity.

Funemployed is a game where players apply for seemingly ordinary jobs but they tend to have ridiculous abilities and must interview for these jobs highlighting these “strengths.”

Trying to apply for a job as a lawyer? Well, you must explain why your ability to speak panda makes you far more qualified for the job than anyone else.

Funemployed is a great game to get your creative juices flowing and to help get to know your friends more intimately. It is also a great choice for those looking for games like Never Have I Ever.

If one of the things that you lost in a Never Have I Ever game was that you had been on a bad bad date, then Red Flags will help you capitalise off of that in this fantastic card game.

Billed as “the game of terrible dates”, Red Flags has you planning the worst date possible with lots of laughter to ensue!

Each turn, an alternating “Single” (who just operates as a judge) must listen to the other players who draw cards to piece together and truly awful date for their single friend.

The Single picks the best of the bad date of the bunch and the player who has the most of their dates picked, wins the game.

This game is great fun and really allows you to (hypothetically) torture your friends and have a great time doing it!

If you’re looking for some games that are like Never Have I Ever, you really can’t go wrong with Exploding Kittens.

This game is incredibly popular and a riotously fun party game that is sure to be a great time for those looking for something different from Never Have I Ever without giving u the hilarity.

Exploding Kittens is actually based off of Russian Roulette. There is a deck of cards and each player takes a turn drawing a card. The player who draws a kitten card “explodes” and is eliminated from the game.

There are also countless other cards that can give you immunity or other powers that makes the game more interesting.

Though this is different in concept from Never Have I Ever, Exploding Kittens is still an excellent game for those who like the aforementioned game and it is sure to entertain all those who play it.

Already experienced the joy of this board game? Check out our list of games like Exploding Kittens!

If you like the dirtiness and hilarity of games like Never Have I Ever but wish they gave you an opportunity to show off your drawing skills, then you’re sure to love Drawing Without Dignity.

This game is very similar to Pictionary, however, the things you’re meant to draw are offensive, dirty and not suitable for children!

Basically, there are two teams and, each turn, one player from each team must, with a time limit, try to draw what has been drawn from a deck of cards. The teammates must then guess that has been drawn.

The game can get loud and exciting and even embarrassing at time — whether it’s with the content or from your poor drawing skills! Much like Never Have I Ever, Drawing Without Dignity is perfect for a great party.

These Cards Will Get You Drunk

Love how Never Have I Ever is basically just a fun drinking game? Then you’re going to have a lot of fun with These Cards Will Get You Drunk because, as the name may suggest, these cards will, indeed, get you drunk!

If you love drinking games and having fun with your friends, then These Cards Will Get You Drunk is going to be the perfect game for you.

So if you’re looking for fun drinking games like Never Have I Ever, don’t miss this one. Just make sure that you drink responsibly!

And finally on this list of games to play like Never Have I Ever comes Charty Party, there perfect party game for fans of charts are graphs!

Sound a bit nerdy to you? Don’t leave yet! This game is actually incredibly fun and hilarious and sure to entertain you just as much as Never Have I Ever does.

The game is billed as “the adult card game of absurdly funny charts, graphs and data visualisation” and the game is very simple to play.

Basically, there is a deck of “chart” cards which have unlables charts and graphs printed on them and then there is another deck of “y-axis” cards that players can label the graph with.

Players are dealt a hand of y-axis cards and each turn, a chart is drawn by an alternating judge and players much draw from their hand the best y-axis label for the chart. Hilarity will ensue.

So, if you’re looking for the perfect game to round out this list of games similar to Never Have I Ever, you cannot go wrong with Charty Party!

Finding great games to play like Never Have I Ever has never been easier! With so many adult party games out there, the hardest thing you’ll have to do is figure which one to play next!

Are you searching for more games like Never Have I Ever? Have any recommendations that didn’t make the list? Let us know in the comments! 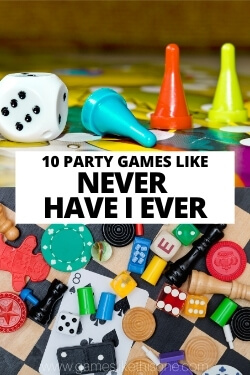