Irreverent party games like What Do You Meme? have been popularised in recent years by groups of friends who are looking for an evening of laughs and inappropriate humour. The premise of the game with players competing to caption various memes can ensue in hilarity and debauchery and it is sure to let you get to know your friends a bit better.

If you have already had a barrel of laughs playing What Do You Meme? with all of your friends, it’s likely that you may be on the hunt for some more games similar to it. Luckily, there are countless great fun games like What Do You Meme? out there that you and your friends are sure never to have a boring night again.

So if you’re looking for more game similar to What Do You Meme? you’ve come to the right place. These ten games are fun, dynamic, and sure to leave you gasping with laughter if you play them right!

No list of games like What Do You Meme? would be complete without including the game that started it all – Cards Against Humanity. If you’re a fan of the former game, it’s likely that you’ve played the latter, but in case you haven’t, here’s a brief outline.

Billed as the “party game for horrible people” Cards Against Humanity is a simple association game with infinite inappropriate options — it’s not for the faint of heart! Players are dealt a hand of cards with various words or phrases meant to fill in a blank.

Each turn, an alternating “Card Czar” will draw from a second deck that will have a phrase with a blank space or two. Players must choose from their own deck with card best fits the situation, and then the czar will then choose from his or her favourite. Whomever that is ends up winning that round. At the end of the game, the person who has won the most rounds wins!

Cards Against Humanity is quite a simple game that can, still, result in hours upon hours of hilarious entertainment. It is the perfect game for those looking for something like What Do You Meme?

Already know and love this game? Check out our list of more games like Cards Against Humanity!

Made from the same people as What Do You Meme?, Incohearent is bound to check all of the same boxes as your favourite meme-based party game. As an adults-only game, it is fair to assume that this is not appropriate for children and will ensue a lot of laughter and hilarity.

The premise of the game is quite simple and very easy to pick up. Rotating judges each turn draw a card with a coherent answer on one side and an incoherent one on the other. Only the judge can see the real answer.

A timer is then flipped and players vie to be the first one to guess the proper phrase. There are 500 cards in the deck, so there are countless different phrases out there, but an example of incoherent phrases is “for wren shuck his sing” for “french kissing.”

There are plenty of inappropriate phrases to guess and it is sure to be a fun and exciting game for those looking for something similar to What Do You Meme?

If you’re looking for an adults-only party game that can help you flex your artistic muscles, then you’re sure to love Drawing Without Dignity. Essentially a raunchy version of Pictionary, this game is perfect for those looking for board games similar to What Do You Meme?

The game follows the exact same sort of premise as Pictionary, however, if you’ve never played that game before, here is a brief outline. Players break into teams and each round, each team picks a player to draw a picture drawn from a deck of cards.

The player’s teammates must guess what the player is drawing and you only have a brief amount of time to draw. The twist in Drawing Without Dignity is that all of the topics are raunchy and inappropriate, making this a great game to play with adults, but not appropriate to play with kids!

All in all, if you’re looking for a fun and creative game like What Do You Meme?, this is a great option for you.

Another fantastic and dynamic option for those looking for other games like What Do You Meme?, this game pits you against your friends to pitch the best (bad) movie to you friends and let the hilarity ensue. Sound like fun? Make sure to play a few rounds of Pitchstorm.

This game is described as “the game of writers attempting to pitch executives the next Hollywood Blockbuster using randomly drawn character and plot cards,” and that description pretty much sums up the game.

Players take turn drawing character and plot cards and must come up with a terrible movie to pitch. The funniest or best movie pitch will win the round, and the player that wins the most rounds will win the whole game!

Another family-friendly game that is, nonetheless, lots of fun and a great addition to this list of games like What Do You Meme? is Dixit. This game follows a similar theme as your favourite meme game, however, it has you think to match pictures to a phrase rather than the other way around.

Dixit is quite an easy game to pick up. Each player is dealt a hand of cards that have beautiful, ambiguous pictures drawn on them. Each turn, a rotating judge will choose one of his or her cards and pick a vague word or phrase that describes it and add it, face down to a pile.

Other players will also choose from their own cards which match with the phrase most. The cards are then flipped over and players must vote on what was the original card. The player that guesses the most correct cards by the end of the game, wins.

All in all, Dixit is a great game if you’re looking for games similar to What Do You Meme?

If you’re searching for riotous adult party games like What Do You Meme?, then you need to play a few rounds of Deck Around – you’re sure not to be disappointed.

Like many of the other games on this list, Deck Around is quite easy to pick up and a lot of fun once you do. The general premise of the game is that there is a deck of cards and, each turn, a player must draw a card with a slang term on it along with the actual definition of said slang term. The player’s goal, however, is to make up a unique definition and to convince that it’s the real one.

It can turn inappropriate at the best of times and this game is perfect for those who are looking for some great games similar tp What Do You Meme? for adults.

Billed as the the “original Aussie adult party game”, F**k the Game incorporates one of our favourite things about our Australian friends — their ability to have a great time and use creative and verbose expletives. It is also a great game to play if you like What Do You Meme?

The deal with F**k the Game is that it not only makes you shout out swear words, but it also teaches your brain to think quickly! A fun and easy game to play, it is perfect for those looking for a game like What Do You Meme?

That’s What She Said

Fans of The Office are sure to love this game, and That’s What She Said is also the perfect game for those looking for a party game like What Do You Meme?

That’s What She Said is a raunchy and outrageous adults-only game that is sure to thrill. Very similar to Cards Against Humanity along with the meme game we’re all so fond of, this one follows the theme of the phrase “that’s what she said” following the premise of a card czar choosing the best “fill in the blank card.”

So, if you’re looking for an explicit and inappropriate game very similar to What Do You Meme?, then you should very much consider picking up an edition of That’s What She Said.

If you’re looking for a game like What Do You Meme? that is appropriate to play with your kids, the Apples to Apples is also a great choice for you.

Essentially considered to be the family-friendly version of Cards Against Humanity (which the vast majority of the games on this list draw inspiration from), Apples to Apples is fun and exciting to play with the entire family.

Each player is dealt a hand of cards from one deck that each contains a word or phrase. At the beginning of each round, a rotating card czar draws a phrase from a separate deck of cards. Players must pick from their hand which of their cards best completes the phrase. The czar then decides which of the phrases is best and whomever’s card that it chosen, wins the round. The person who wins the most rounds wins the game!

This game is lots of fun and can be very funny, however, does not contain the explicit or offensive content that other games on this list contain.

Never Have I Ever

And finally on this list of games like What Do You Meme? comes a party game that people have been playing for ages, but made easier because numerous hilarious experiences are written on cards. What game is this? Never Have I Ever, of course!

Gone are the days where you have to wrack your brain for experiences that you’ve never done but you think your friends have, the game version of Never Have I Ever has countless cards with wild experiences that is sure to have you getting to know your friends far more intimately than you ever have before.

If you don’t know what Never Have I Ever is, then here is a quick description. Each turn, a player will draw a card with something that says “never have I ever…done or experienced a certain thing” all those in the group who have done this will lost a point (or sometimes, have to take a drink!) and the people who haven’t done it will win a point.

At the end of the game, the person with the most points wins! This is a great and fun game that is perfect for those looking for more hilarious card games like What Do You Meme?

Already own this game? Check out our list of more party games like Never Have I Ever!

There are countless games that are like What Do You Meme or follow similar themes. If you’re looking for the perfect party game to play with your friends, then these are sure to entertain!

Are you searching for more games similar to What Do You Meme? Have any recommendations that didn’t make the list? Let us know in the comments! 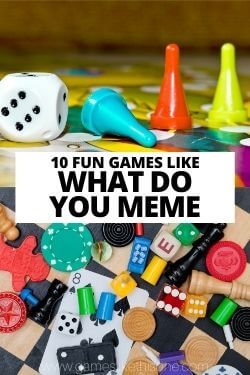