Strategy board games like Risk have been popular amongst players looking for a long and complicated game to play since its release in 1957. Billed as the “game of global domination,” Risk is a game that involves intense strategy and diplomacy in order to come out on top and win the game. A board game that’s best played when you have many hours to kill (or are happy to spread it out over a few days), Risk is immensely popular as it requires quite a bit of strategy of and a lot of competition!

If you’re sick of playing Risk but still want to have a collection of more games similar to it, make sure to check out these ten great strategy board games that are sure to keep you entertained!

One of the most famous and popular board games similar to Risk is Catan. Previously known at The Settlers of Catan, this board game follows similar themes to Risk and it involves quite a bit of planning and strategy in order to be able to win.

The concept of the game is that players are meant to settle a colony (Catan) on a remote island and have to deal with any curveballs and incidents thrown their way. The game requires strategy and time, similar to Risk and it is a great, complex game to include in your collection.

Because this game has become quite popular amongst board game enthusiasts in its own right, there are also countless expansion packs that you can purchase in order to never play the same game twice and to always have different variables in your board gaming experience.

Another fantastic board game like Risk is Scythe, which is another complicated and long-winded strategy game that is great for fans of Risk but who are looking for something a bit different.

The premise of this board game is that it’s set in an alternative 1920’s Europe where the universe in which the game takes place is ruled by a hyper-capitalist city-state known as “The Factory” that wages war on surrounding factions. Each player in the game represents a faction in Eastern Europe that has to fight for survival and the goal is for their faction to come out on top, much like in Risk.

The game can last upwards of 2-3 hours from start to finish, can accommodate 2-5 players, and is best for those who are ages 14 and up due to the strategy involved and the somewhat heavy subject matter.

If you’re on the hunt for more strategy board games like Risk then Axis & Allies may be a great option for you. As the name would suggest, this game is based off World War Two strategy and pits players against each other to achieve world domination.

Unlike in a number of other games, Axis & Allies relies on teams to win and no individual player will take the crown for winning this game. Players divide into two teams, one representing the Axis Powers and the other representing the Allied Powers. The game then progresses through various moves and variables with each team making decisions in order to win the war for their side.

Much like in Risk, the goal of this game is to essentially take over the world, this one is just based in historical context. Accommodating 2-5 players and taking upwards of 3 hours to complete, it is also a board game that will take an entire evening to complete.

A Game of Thrones: The Board Game

You have to have been living under a rock for the past decade in order to have missed the phenomenon that the HBO adaptation of George RR Martin’s A Song of Ice and Fire series has made. And while the TV show was incredibly popular, it has also inspired a board game that takes it political aspects and transfers them to your living room.

The board game recreates the happenings of the first few books in the series, during the time when Robert Baratheon has died and numerous kings are battling for control of Westeros. Much like in Risk, strategy is necessary to play this game and to win, because everyone knows that “when you play the game of thrones, you win or you die.”

Like a number of the other games on this list, A Game of Thrones: The Board Game requires at least 2-3 hours to play in its entirety and can accommodate up to 6 players.

Released only a couple of years after Risk was first introduced on the market, Diplomacy is an excellent game to play if you’re interested in finding a board game like the famous game of global domination. Concentrating on, not surprisingly, diplomacy rather than war, this game involves quite a bit of thinking and strategy and is great fun to play.

Set in Europe prior to World War One, each player represents one of either Great Britain, France, Austria-Hungary, Germany, Italy, Russia or Turkey. The game starts in the spring of 1901 and, with each turn, each player must make a diplomatic move in order to de-escalate a situation and avoid going into a full-blown world war.

A fun game popular amongst hardcore board game fans, Diplomacy is an excellent choice for those looking for games like Risk.

A bit of a detour from games similar to Risk come Dominion, an immensely popular card game that has countless expansion packs and fans from all across the world.

Dominion is a highly popular game that unites board game fanatics the world over and it is a great option for those looking for something that involves strategy and thinking but isn’t quite as long and complicated as a game of Risk.

Dominion is a card game where the goal is to purchase the most estates and gain the most victory points in order to win. You can acquire money, play actions, and buy different cards with each turn, playing in either a defensive fashion or all about the attack.

There are so many different expansions packs available for Dominion meaning that you can find a different game in each round that you play. With a game lasting closer to an hour (and even shorter depending on the number of players you have), it is also a lot more manageable than playing a long-winded game like Risk.

One of the games with the longest active playtime on this list, Supremacy is an excellent board game to pick up if you’re searching for something similar to Risk. Billed as “The Game of Superpowers,” this game may also be one of the most similar games to Risk on this list.

Like in Risk, Supremacy is based on pitting conventionally known global superpowers (like the USA or China) against each other to see who will come out on top. Things like strategy, diplomacy, military skill and negotiation in order to win this long-winded game.

With a playtime of around 4-5 hours (sometimes more) and accommodating 2-6 players, this game is great for ages 12 and up, however, it is not for the faint of heart as it is quite an undertaking.

If you’re interested in the war side of strategy games like Risk, then Fortress America is a great option for you! This game is also quite long and complicated and it is sure to thrill all those who are looking for something like Risk but different enough in order to mix up their game nights.

The premise of Fortress America is that the game is set in the near future USA and the country is staving off invasions from other nations. Using elements of military strategy, players must defend their sides in order to come out on top by the end of the game.

Like most of the other games on this list, this isn’t a short game to play with playtime average about 2-3 hours. It can accommodate 2-4 players and it is great for those who are ages 12 and up.

If you like Risk but wish there was more of a fantasy element to the game, the Small World is a great option for you! A fun game that has a shorter playtime that many of the others on this list (about 45-90 minutes depending), it is a bit more manageable for those looking for a strategy game but don’t want to devote countless hours of their lives to it.

The concept of this game is very simple — you are inhabiting a fantasy world with countless other creatures including giants and dwarves and wizards, however, the world isn’t big enough to accommodate you all. So the goal of the game is to engineer the world so that you are accommodated and you opponents and others are not.

A little bit less complicated than a few of the other games on this list, Small World is great for 2-5 players and is a good game for those ages 8 and up.

Already know and love this board game? Check out our list of more games like Small World!

And finally on this list of board games like Risk comes Nexus Ops an interactive strategy game that is sure to thrill all those who want something similar to Risk. With a general playtime of about an hour and a half, it is also a bit shorter than a few of the other games on this list and therefore can be more manageable to play for a game night where you don’t want to be battling for domination until the wee hours of the night.

Where Risk is set in the “real world” Nexus Ops has some cool science fiction elements to it. The general premise is to assume control over the universe and there are strategies and battles involved in order to do that.

Accommodating anywhere from 2-4 players and suitable for ages 12 and up, the game is also set up differently each time you play it, meaning that you are always in for a fun and unpredictable game every time you play Nexus Ops.

Finding strategy board games like Risk isn’t a hard task, with so many games following similar themes out there on the market. These then games are sure to scratch the same itch tha Risk does and keep you having fun for years to come!

Are you looking for games similar to Risk? Have any suggestions that didn’t make the list? Let us know in the comments! 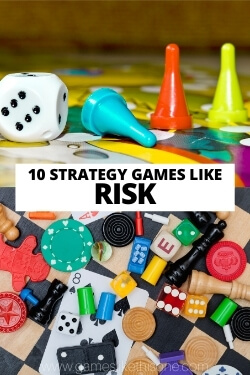