Interactive and inventive board games like Small World are popular for a reason — their world-building and strategi characteristics are fun and challenging and make you think in ways that other board games do not. But, if you’ve played Small World a few too many times and are looking for more game similar to it, you’ve come to the right place.

For fans of complex board games, there are countless options that can have you and your friends playing for hours on end to create the most strategic plan to dominate your opponents. However, some games are better than others and these ten fantastic games like Small World are sure to have you playing well into the night and enjoying every minute of it.

So if you’re looking for some new board games to add to your repertoire, then make sure to look into these great board games similar to Small World, they’re sure not to disappoint!

No list of strategy games like Small World would be complete without including one of the most famous modern strategy board games out there: Catan. Originally called The Settlers of Catan, this game is a world-building, domination game that is sure to entertain those looking for something similar to Small World.

The premise of the game is that each player is a coloniser looking to settle a new land called Catan. Through various turns, players make decisions to build their own colonies and various curveballs can get thrown at them as well.

The game requires a fair amount of advance-thinking and strategy, however, you may need to deal with backstabbing and cunning opponents that will foil your carefully drawn out strategy.

All in all, if you’re looking at a world-building game similar to Small World, you very much cannot go wrong with Catan.

Risk is another essential strategy game similar to Small World and one, if you’re into board games even in the slightest, that you’ve probably heard of. Known as “the game of world domination,” Risk is far more brutal and backstabbing than Small World, but it is by not means less fun.

As you likely already know, don’t start a game of Risk if you’re not ready to commit a good few hours to complete it. This game is complex and the end goal is to take over the entire world — and that typically takes over two hours!

Suitable for two to six player and notorious for its long play time, Risk is still just as popular today as it was when it was originally released in 1959. So, if you’re looking for a classic board game to play when you’ve played Small World just a bit too much, consider playing Risk.

Another fantastic addition to this list of fantasy board games like Small World comes Evo, a game that follows a very similar concept as Small World but has the added benefit to being set in the time of dinosaurs!

Throughout the game, players choose to migrate their herd of dinosaurs to various different areas to aid in their evolution all while trying to outrun the inevitable strike of a meteor that will decimate the entire population.

In fact, unlike the other games on this list, Evo isn’t ended by one player conquering or dominating all, it is ended by a chance roll of the dice that causes a meteor to strike Earth.

Accommodating 2-6 players and with a start-to-finish run time of about two or more hours, Evo is a game that requires significant dedication and strategy, a great choice for fans of Small World.

History of the World

Another deeply complex and inventive board game sure to thrill those looking for more games similar to Small World is History of the World.

This game is a behemoth and is well-regarded as one of the top world-building and strategy board games out there, meaning that it truly deserves its spot on this list.

This game is long and complex, but the premise is generally pretty simple, conquer as much territory and make as big of a mark on the world over seven rounds.

The concept is that civilisations come and go over time and each round is called an “Epoch” and takes place over a certain period of time before the round ends and history moves forward. The game starts in 3,000 BCE and ends in pre-WWI Germany.

There is far more to this epic game that just that simple explanation, but anyone who really loves a long and complex board is sure to love this time. Great for 3-6 players and running for around four or more hours, History of the World is sure to be a welcome addition to your game nights.

If some of the other games on this list have a bit too many roots in “modern” history, then you should consider playing Stone Age at your next games night.

This game is, as the name would suggest, set in the prehistoric time of hunters and gatherers, but follows many of the same strategic premises as the other board games on this list of games similar to Small World.

The concept of this game is that you, as a player, are living in the stone age and, with each turn, try to modernise your world and reign supreme over the other players. Various curevballs can get thrown your way with a roll of the dice or the drawing of the wrong card, however, there is a fair amount of strategy and planning that is necessary to win this game, as well.

Stone Age is best played with two to four players and the total run time is about an hour and a half.

If you’re after a card game rather than more board games like Small World, then look no further than 7 Wonders.

This game is one of the great world-building games that also shares similarities with deck building games like Dominion. Combining the strategy of Small World, this is a great game to play if you’re looking for something fun to play.

7 Wonders follows the premise that you and your fellow players are the ruler of one of the seven great cities of the ancient world. With each turn, you draw a card or play action cards to assert your dominance over your city or give you a boost later on.

There is a significant amount of strategy involved, much like in Small World, so it’s sure to entertain you as much as that game does.

If you wish your games like Small World has a bit of US History thrown in, then you’re sure to love 1775: Rebellion.

If the year in the title wasn’t a giveaway, this strategy game is based during the American Revolutionary War and players are either fighting for the American Continental Army or the British Redcoats in order to become independent or painting America as a colony.

Considered to be one of the best “war games” released in recent years, 1775: Rebellion is a fantastic game to play if you love the strategy and domination aspects of the other games on this list. Each side in this game is vying for the control of the American Colonies and can call in the aid of the Native Americans, French Army or German Hessians as they see fit to reach their goal.

Suitable for two to four players and with a run time of about two hours, this is an excellent way to spend a few hours with your friends, especially if you are all fans of Small World.

Five Tribes is another world-building game where players vie for control of a sultanate that they stumble upon right after the current sultan has died. Much like in Small World, there is a lot of strategy involved in how to maintain power and to grow your influence properly.

The game is fairly simple to pick up, unlike a number of the more complicated games one this list of game similar to Small World and it really comes down to the strategy you divide and the calculated moves you must make to give this game a lot of complexity and fun.

Great for two to four players, Five Tribes can be played from start to finish in around an hour, meaning that it is also a shorter game than a number of others on this list. All in all, if you’re looking for an easy-to-learn game that leans heavily on strategic thinking, then Five Tribes is a great game for you.

Next on this list of games like Small World comes Carcassonne, a world-building game that involves laying tiles while building up cities and towns in medieval era France.

This game also involves strategy, but it is more to do with where and how you lay your tiles, how you build your cities and towns and where you may put guards to block other players rather than rolling dice and drawing cards like many of the other board games on this list. Nevertheless, Carcassonne is a great game for strategic thinkers who love the challenge of building up cities.

This game is great for two to five players and it actually has the shortest playing time of any of the other games this list, with an average game lasting about 30 to 45 minutes. It is also pretty easy to pick up and learn and doesn’t require a lot of complex rules and things to follow but still leans heavily on strategic thinking.

So, if you’re looking for a quick and simple game that is similar to Small World, consider playing Carcassonne.

Another fantastic world-building strategy game, Vinci very much deserves its place on this list of board games similar to Small World. With a very similar concept to many of the other games on this list, Vinci is sure to be a welcome addition to your game cabinet.

Based in a medieval era Europe, players compete to conquer, defend and rule over various territories until one player reigns supreme. The game is complex and incredibly fun and the absolute perfect game to play if you like Small World because it has more or less the same concept, just based in real-life Europe rather than a fantasy world.

So, if you’re looking for the ultimate game like Small World, then you cannot go wrong with Vinci.

There are countless games like Small World out there as the concept of strategic world-building is something that delights board game fans the world over. If you’re looking for something similar to Small World, you’re sure to find that these games fit the bill.

Are you searching for more board games similar to Small World? Have any recommendations that didn’t make the list? Let us know in the comments! 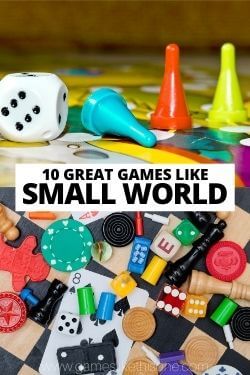