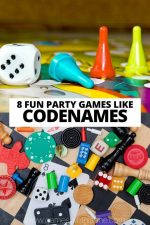 Collaborative guessing games like Codenames are some of the most fun tabletop games to play with friends. Figuring out hidden what they Spymaster is describing and working with your team to make the best choice is a fun way to spend an evening, which is why Codenames is consistently considered to be one of the best party games on the market.

However, there are lots of other games similar to Codenames that use elements of guessing and collaboration to compete with your friends and have a fun dinner party or games night. So, if you like Codenames but are looking for a more complicated or exciting game like it, check out some of these.

If you’re looking for a great, entertaining party game similar to Codenames, then you can’t go wrong with playing Dixit.

This game is like Codenames in the sense that you have a group of players guessing the intention of another player. However, where Codenames uses words and associations in order to win, Dixit uses pictures.

The general concept is really simple. Each player is given a hand of cards with various, vague paintings on them.

Alternating turns, one player will select say a word or phrase that best describes the picture they intend to put down and then all other player select a picture that best represents that word in their own deck. It is up to the players to decide which picture they think was the original.

At the end of the game, the player with the most points wins.

All in all, if you’re looking for fun party games like Codenames, then Dixit is an excellent option for you.

If you’re looking for more fun party games like Codenames then Monikers is a super good choice for you. Another fun guessing game to play with your party guests, Monikers take the concept of the ever-popular party game Celebrity and gives you a number of great well-known people to impersonate or describe.

The premise of the game is as follows: you split into teams and take turns drawing cards. One player draws a card which will have the name of a celebrity or well-known historic person written on it and it is his or her job to describe or impersonate that person. You only have a limited amount of time for each turn and the team with the most correct guesses wins.

So if you’re looking for a fun and interactive game similar to Codenames to bust out at your next dinner party, you cannot go wrong with Monikers.

If you’re on the hunt for yet another fun guessing game that is similar to Codenames, then make sure to play Spyfall at your next party. This game is a really fun addition to any social gettogether and it is a must-have in any games collection.

The general concept is pretty simple. At the start of each round, each player will be dealt cards that will inform them of their identity and their location.

One player will be a spy, however, and won’t have any information about the location where the rest of the players do. You then take turns asking questions and trying to figure out who the spy is — it is essential that the spy pays close attention because he doesn’t want to be caught out!

At the end of the game, if no one can figure out who is the spy, then that player wins. If the spy is caught out, then those who weren’t the spy win.

If you like Codenames for its cooperative guessing and deduction aspects, then you’re sure to find that Mysterium is a great game as well. Another cooperative investigation game that is quite similar to Codenames or Dixit, Mysterium is one of the best party games to have in your repertoire.

Mysterium is a game that is likely better played by board game enthusiasts rather than casual players, however, it is sure to be a welcome addition at any games night. It can accommodate 2-7 players, meaning that it’s perfect for larger groups, as well.

The concept of the game is fairly straightforward. In a haunted house, one player takes the role of a ghost and the other players are mediums and try to figure out who and where the ghost is. There are, of course, other obstacles that are thrown in that lead the game to lasting around 45 minutes each turn.

If you’re on the hunt for more involved and complicated games like Codenames, then Mysterium is a great choice for you.

Away from the complicated board games, we reach a family-friendly favourite on this list of party games similar to Codenames: Taboo! Taboo is an already well-known word guessing game, however, it’s popularity still means that it rightly earns its place on this list.

If you’re not already familiar with this game, I’ll go ahead and explain it for you. Accommodating four or more players, players will divide into teams.

Each turn, a player will select a card with a word they are supposed to describe and a list of words below it that they aren’t allowed to say in order to describe it. You only get a limited amount of time to describe the word and the team that gets the most correct guesses wins.

So, if you’re looking for dynamic word guessing games like Codenames to play at your parties, then make sure to add Taboo to your list.

Everyone knows and loves Pictionary and, though it may seem obvious, it is a great addition to have on this list of party games like Codenames.

If you have been living under a rock for your entire life and aren’t don’t know how to play Pictionary, then here is a little description.

Players divide into teams and on each turn, one player must draw something on a pad of paper and the players on his team must guess what he is drawing. The artist cannot speak, write or give any hints and he only gets a limited amount of time to draw his picture before the turn is over.

Like in Codenames and countless other collaborative guessing games like it, the team that makes the most correct guesses once the game is over wins. So if you’re on the hunt for the perfect party game like Codenames, why not go classic and old school and pick yourself up a copy of Pictionary?

A perfect mixture of games like Codenames and games like Pictionary, A Fake Artist Goes to New York is an absolutely excellent addition to any party games collection. This fun and interactive collaborative guessing game mixes elements of social dedication and drawing to ensure that you have a great time at your next games night.

The concept of the game is that each player is meant to be a struggling artist in New York City, however, one among you is a “fake artist.”

The end goal of the game is to figure out who the fake artist is. Each player is given a whiteboard and a dry erase marker and each turn, they’re given a clue for what to draw. That is, everyone but the fake artist. The fake artist must deduce what the other teammates are drawing to bluff his way into convincing everyone else that he is legit.

If you like guessing games and love elements of artwork mixed into them, then you’re sure to love A Fake Artist Goes to New York.

Finally on this list of games similar to Codenames comes Decrypto — the perfect game to play if you’re interested in trying to interpret coded messages and love collaborative thinking games.

The concept of the game is quite similar to the other games mentioned on this list, however, Decrypto does have its own twist. Players compete in two teams (the game can accommodate up to 8 players) and each player will have his or her own screen. Players will then tuck cards into their screen which will give them a code in order to collaboratively figure out how to decode a specific message.

The game is played over multiple rounds and it can last anywhere from 15-45 minutes depending on how many people you have on each team. The team that guesses the most words correctly (meaning that they have correctly decoded all of the clues) wins.

So if you’re looking for another fun party game like Codenames that has you working together and competing with your friends in a similar way, you can’t go wrong with Decrypto.

Finding fun and interesting party games like Codenames isn’t all that hard to do. Hopefully, this list of great tabletop games will help make your game nights more enjoyable for months to come!

Are you looking for more games similar to Codenames? Have any suggestions that didn’t make the list? Let us know in the comments! 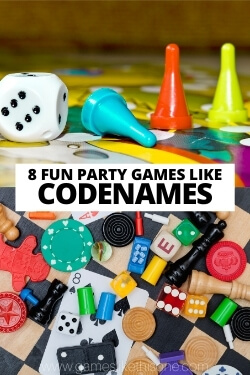