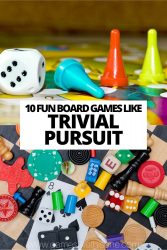 Board games like Trivial Pursuit are hugely popular with families, trivia fans, and at parties. As a trivia-nerd myself, I get it. What could be better than a game that combines a board game with trivia, right?

Trivial Pursuit was first released in 1981 – the story goes that the creators, Chris Haney and Scott Abbott, wanted to play Scrabble but some pieces were missing. So they created their own game. And Trivial Pursuit came into the world, offering trivia-based fun for players ever since.

Do your eyes light up when a history question appears in Trivial Pursuit? If so, Timeline is the game for you. This speedy card game for 2-8 players will test your knowledge of historical events and when they happened.

Each card has a historical event, invention, or discovery. Players take it in turns to place cards on a chronological row of events. Once the card is placed, it is flipped over to reveal the date.

If you have correctly placed your card, it stays on the table. If not, the card is removed and you must draw another card. The first player to get rid of all their cards wins.

If you’re after trivia games similar to Trivial Pursuit, Frédéric Henry’s Timeline will be a hit with history buffs and families.

4-18 players compete to guess at questions like ‘how many feet wide is an NFL football field?’ or ‘in what year did the bikini swimsuit make its first appearance?’. Wits & Wagers isn’t about knowing the exact answer. Instead, it’s all about making a good guess and betting on which player you think will get the closest.

Points are scored for getting the closest answer and for correctly betting on who you think will be closest. This silly, fun-filled party game is great if you’re after alternatives to Trivial Pursuit but prefer bluffing to trivia.

Anomia is a fast-paced card game that is all about thinking on your feet. Designed by Andrew Innes, this 3-6 player game is great for friends or families looking for games similar to Trivial Pursuit.

In Anomia, players draw and place face-up cards from the deck. These have words and topics on them such as ‘cookie brand’, ‘fairy tale character’, or ‘noun’.

If a player draws a card with a symbol matching another player’s card, those two players compete to name something according to the word on their opponent’s card.

The rules are simple, but Anomia will be sure to have players jumping out of their seats, experiencing brain freeze, and screaming strange words at each other!

HINT is another easy and entertaining party game that anyone after games like Trivial Pursuit will enjoy. This 4-10 player game, designed by Jesper Bülow and Jonas Resting-Jeppesen, splits players into teams who must guess what their teammates are trying to communicate.

Each card will ask you to hum, mime, draw or talk about a topic. There are five correct answers on the back of each card and one forbidden answer. So you might need to mime ‘types of dogs’, and your teammates might correctly guess ‘dachshund’ or ‘chihuahua’ and score a point for each. But if they guess ‘golden retriever’, the forbidden word, you lose two points.

HINT is a super-fun, super-silly party game, ideal for groups of friends or families with teenagers.

If you’re a trivia fan, there’s a good chance you’re also a fan of the TV show Jeopardy!. So if you’re looking for games like Trivial Pursuit and you love answering in the form of a question, why not try out the board game adaptation of the much-loved TV show?

Jeopardy! was first released in 1964 and lets 3-5 players play out their favourite trivia show. One player is the ‘emcee’ and will be quizzing 2-4 other players. Each round, five answer cards are shown, worth $1 each.

Players must use these clues and guess the trivia question they correspond to. Guess correctly and you’ll get that dollar – but guess incorrectly and you’ll be penalized the same amount. Jeopardy! takes place over three rounds – in the second round stakes are doubled and in the final round players can bet some or all of their money.

The player with the most money at the end of the game wins.

In this 3-8 player game, 25 cards are laid out on the table, each with a different word on it. Players are split into two teams and each round, one member of the team will be the ‘spymaster’ and receive a secret key card locating the ‘codenames’ on the table that they need their team to identify.

But the spymaster can’t say the codenames on the table. Instead, they must give clues relating to one or more of the cards. For example, if your team needs to choose ‘tree’ and ‘river’, you might say ‘nature 2’ to tell them that there are two cards relating to nature they need.

But watch out – there is an ‘assassin’ card on the table and if your team finds this you automatically lose the game. This fun, team-based guessing game is great for parties and families.

This is one for the movie-buffs. Cinephile is the perfect game if you’re after trivia games similiar to Trivial Pursuit and you love a film question. Cinephile contains 150 cards, each with a movie star and a film they have appeared in on it.

With these cards, you can play a bunch of different games. You could play ‘Six Degrees’ – where you draw two cards and need to connect the actors based on films they’ve been in. For example, Brad Pitt and Jim Carey – Pitt is in Se7en and Carey is in Bruce Almighty, Morgan Freeman is in both films – 1 degree apart! Score 1 point and the player with the least points wins).

Or you could play ‘Filmography’, where one card is drawn and you and your opponent take it in turns to name a film that the actor is in. The first player unable to think of a film loses the point. Cinephile includes a selection of games you can play with its cards – or you can make up your own game!

…I should have known that!

If you’re after more trivia games like Trivial Pursuit, …I should have known that! is a simple but rewarding card game – great for adults or teenagers.

The premise is simple enough, but this change of rules makes …I should have known that! a game more about deciding how confident you are in your answers rather than being the smartest in the room.

…I should have known that! is perfect for casual gamers looking for a light trivia game or anyone who enjoys pulling out quiz questions at parties.

5 Second Rule is a fast-paced trivia game where speed is of the essence. If you’re after board games similar to Trivial Pursuit and reckon you could name, for example, three dog breeds or three green vegetables in 5 seconds, 5 Second Rule is the game for you.

Designed by Michael Sistrunk, this 3-6 player game is great for families or small parties. It even comes with a huge twisted five-second timer that adds an extra dose of drama to each turn.

5 Second Rule is another game on this list that will have you spluttering, experiencing brain freeze, and jumping out of your seat!

If you’re in need of more trivia games like Trivial Pursuit for parties and big family gatherings, Linkee! could be your new favourite.

As individuals or as teams, you and up to 199(!) other players answer trivia questions and, like a ‘connections’ round at trivia night, must find the link between the answers.

Each card has a letter on the back, which, when put together, spell LINKEE. Answer questions correctly, guess the connection between the answers, and you or your team gain that card. The first player or team to spell LINKEE with their cards wins the game.

From the publishers of Bananagrams, Linkee! is a fun-filled party game for trivia fans.

Board games like Trivial Pursuit let you bring trivia nights and game shows to your own home. Whether you’re a family looking for a new knowledge-based game or you’re after fun trivia games for parties, this list of 10 fun games has something for everyone!

Are you looking for more games similar to Trivial Pursuit? Have any recommendations that didn’t make the list? Let us know in the comments! 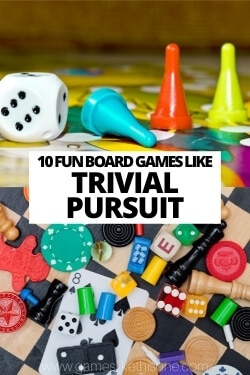