Games like Articulate are party favourites. Articulate is a fun-filled word game in which players have to guess as many words as possible related to a category in 30 seconds.

One player is the ‘describer’ and draws a card with six words on it – a word for each of the six categories in the game. Whatever colour their team’s token is on on the board is the category that the team will be guessing in this round.

The describer goes through as many cards as possible, describing the word in their category without using the word itself.

Designed by Andrew Bryceson, Articulate is a 4-20 player party game suitable for gamers aged 12+. If you love Articulate but need a new game for your parties or board game nights, this list of 10 games like Articulate will have something for you.

HINT is a simple yet fun party game that is perfect for anyone looking for games similiar to Articulate. In HINT, 4-10 players split into two teams and must communicate topics to their teammates by humming, miming, drawing, or talking.

In Jesper Bülow and Jonas Resting-Jeppesen’s HINT, each card has a topic with five correct answers on it. For example, a card might have dog breeds as a topic and correct answers such as ‘Dachshund’ or ‘Labrador’.

The card tells the active player how they can communicate these answers and their teammates score a point for each answer they get correct.

There is, however, one forbidden answer on the card, such as ‘Dalmatian’. If a teammate says the forbidden answer, the team loses two points. HINT is a fun-filled game and is perfect for parties or families with older kids.

If you’re after fast-paced, wordy games, Anomia could be your next party game of choice. Designed by Andrew Innes for 3-6 players, this card game has players thinking on their feet to win the game.

Players take it in turns to draw cards face up from a draw pile. Each card has a symbol and a category on it, such as ‘2 letter word’ or ‘cookie brand’.

If a player draws a card with a symbol that matches the face-up symbol of another player’s card, they compete to say something in the category on their opponent’s card.

The fastest player wins and keeps the card and the player with the most cards when the draw pile is empty wins the game.

Cranium is a classic party and perfect for anyone after games that are like Articulate. This 4-16 player game, designed by Whit Alexander and Richard Tait, has players split into teams to compete in a variety of challenges.

Over the course of the game, Cranium players must use different ways to communicate answers to their teammates. Sculpting out of playdough, unscrambling words, performing musical numbers, or drawing with your eyes closed are just a few of the talents you’ll need to win this game.

Cranium is best-suited to players aged 16+, but younger kids could join a team and play with the help of adults. This fun-filled party game has been a staple at parties and get-togethers for years.

Concept is another great game on this list that has players giving clues for and guessing secret words. If you’re after games similar to Articulate, Concept could be your new favourite.

Designed by Gaëtan Beaujannot and Alain Rivollet, this 4-12 player game is for gamers aged 10+. Players team up with the players on either side of them, so each player is in two teams, but only one player will win.

The 2-player team draws a concept card and chooses a word or phrase on the card that everyone else must guess.

The team cannot speak – they must place various pieces on the game board which is covered in symbols. One piece — a question mark — should be placed on the ‘main concept’, whilst others are placed on clues around the board.

The player who guesses the right answer scores two points and if someone guesses the answer both members of the team score one point. The player with the most points at the end of the game wins.

Incohearant is a fun adult party game like Articulate that involves making sense of nonsensical words. In this 2 player plus card game, one player acts as a judge and reads words from a card drawn from the deck.

At first glance, the phrase doesn’t make sense, but it does sound like something. For example, ‘ham a sauna let’s uh’ sounds like Amazon Alexa.

Players must try to figure out what phrase is being said and win the card if they figure it out. The player with the most cards when the deck has run out wins the game. This speedy game is considered NSFW – there are some adult-only cards in there!

If you’re after games like Articulate, Rollick is a great choice. Designed by John Kovalic and Hal Mangold, Rollick could be described as a reverse-charades.

At least six players split into two teams and players on each team take turns being the ‘guesser’. The rest of the team gets up and draws cards from the draw pile with words or phrases like ‘Dracula’ or ‘Three-Legged Race’.

The team must act out the cards and will try to get through as many cards as possible before the timer runs out.

Rollick is equally great for adult parties and family games nights and is sure to create plenty of laughter for everyone playing.

First released in 1989, Taboo is an old-school party game that many of us may remember from the 90s. This 4-10 player party game is great for anyone looking for games like Articulate and wants to try out a classic party game.

Taboo is a 4-10 player game designed by Brian Hersch. Players split into two teams and the active player on each team draws a card from the draw pile on their team’s turn.

The other team, meanwhile, uses a buzzer to remove the card from the active player if they use a ‘taboo’ word, use gestures, or run out of time. Teams try to win cards and the team with the most cards wins the game.

Did you already play Taboo too much in the 90s? If so, check out our list of games like Taboo!

If you’re after just one game similar to Articulate, why not try Just One? Designed by Ludovic Roudy and Bruno Sautter, this 3-8 player guessing game is a speedy and light game for adults and kids alike.

Just One is a fully cooperative game where players are trying to get a perfect score of 13. The game takes place over 13 rounds. Each round, one player is the guesser and the others are giving clues.

The other players look at a card with five words on it and the guesser chooses a number between one and five. Then the other players each write down a one-word clue on their mini whiteboards, compare their clues, and show these to the guesser.

The difficulty in Just One is that no two clues can be the same. So if when comparing clues more than one player has written the same thing, those clues are removed and the guesser won’t see them. The players gain a point for every word correctly guessed but lose two points for a wrong answer or a pass.

Alex Hague, Justin Vickers, and Wolfgang Warsch’s social party game, Wavelength, is a great alternative for anyone after games like Articulate. In this 2-12 game, players must compete in two teams to read each other’s minds.

Wavelength has a physical dial that has a different pair of binaries at each end every round, such as ‘hot’ and ‘cold’ or ‘sad song’ and ‘happy song’ and so on.

Each round, one teammate is the ‘psychic’ who can see where exactly the ‘bullseye’ is on the dial. They then give a one-word clue to the rest of their team so that they can guess where the bullseye is on the dial, scoring points depending on how close they get.

Vlaada Chvátil’s Codenames is a hugely popular card game that anyone looking for games similar to Articulate is sure to love.

In Codenames, players split into two teams of spies. One player from each team will be the ‘spymaster’ and is trying to get the other players to identify the code names of different agents on a 5×5 board of cards.

The cards have words on them such as ‘forest’, ‘parachute’, or ‘trunk’. The spymaster can see which code names are their agents, and will give clues to their players. For example, if there are agents on ‘forest’ and ‘river’, the spymaster might say ‘nature two’ to indicate that there are two cards related to nature which are also agents.

Players must watch out, however, for the assassin. If the players accidentally choose the assassin’s codename, their team automatically loses. Otherwise, the first team to find all of their agents wins the game.

If you love pulling out games like Articulate at parties or family games night, there are plenty of games on this list that will create just as much fun. From silly guessing games to mind-reading puzzles, you and your friends will have plenty of fun with these party games.

Are you looking for more games like Articulate? Have any recommendations that didn’t make the list? Let us know in the comments! 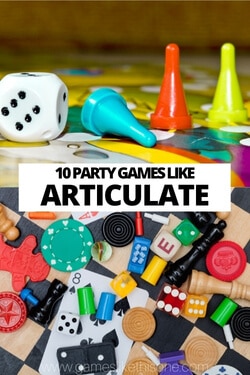