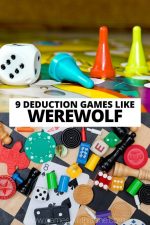 Games like Werewolf (also called Mafia by some people) have been some of the most popular social-deduction party games for years on end. There is no physical game required in order to play, meaning that it is accessible and fun to play for all who have enough people gathered. However, sometimes playing the same game with your friends all the time can be a bit monotonous and, dare I say it, boring!

While most social deduction games like Werewolf do require you to have a physical game in order to play, there are so many out there on the market that you’re sure never to have a dull games night or party ever again.

So if you want to pit friend against friend or throw wild accusations at your loved ones all in the name of a good time, make sure to check out these great party games like Werewolf that are sure to keep you having fun!

Bang! The Dice Game is one of my all-time favourite hidden-identity games. Set in the wild-west, this game can play 3-8 people and an entire game will take around 30 minutes.

Everyone gets an identity that gives them special abilities, and they also get a secret identity — either a deputy, outlaw or renegade. One player is the sheriff and the others either try to keep the sheriff alive or kill the sheriff depending on their role.

The game can turn lively and raucous as there are other complications involved, as well. The best part is that you never truly know who’s side anyone is on until the game is over. So if you’re looking for an incredibly fun game like Werewolf, Bang! The Dice Game is an excellent contender.

Playing 2-6 players (it’s best with over 4), the premise of the game is that you’re living in a society in the future and the elites frequently vie for power. There are five different identities all possessing different abilities.

You never know who someone else is, but you can coup and undermine your opponents until you win the game.

This is another fantastic option if you’re looking for party games like Werewolf. Based loosely off of Arthurian legend, The Resistance: Avalon is a fun hidden identity game that is sure to make your game nights a blast.

Following a similar outline as the other games mentioned on this list, you are your friends will be assigned a character and no one knows who is who. The objective of the game is to for your team to win, whether you are on the side of King Arthur or the side of Mordred.

The game is relatively quick to play and will likely leave you shouting and accusing your friends of all sorts of thing — but isn’t that where the most fun in hidden identity games lies?

Already know and love this game? Check out our list of more games like The Resistance: Avalon!

A fast and easy game that plays 4-10 people, One Night Ultimate Werewolf is one of the best games similar to Werewolf that you could pick up — if fact, it is based off of the popular party game that this list is all about! The premise is much like the other games on this list, where each player is assigned an identity with its own abilities.

The objective of the game is to figure out who the werewolf is amongst the players. The game is considered won when the said werewolf is killed. One round of the game only takes about 10 minutes and it is fast-paced and exciting, so y0u can play numerous rounds and expect different outcomes each time.

This is also a game that plays a number of people, so it’s great for larger groups and parties! All in all, One Night Ultimate Werewolf is one of the best games like Werewolf to include in your tabletop game collection.

If you like drawing and social deduction, then this game is an excellent addition to your tabletop games nights.

A departure from the pure social deduction games into more of a traditional guessing game, Dixit is a great choice if you’re looking for an enjoyable party game like Werewolf.

The general premise of Dixit is quite simple and it’s easy to learn quickly and enjoyable to play with the whole family. It can accommodate 3-6 players, meaning that is is also a great game for smaller board game parties and get-togethers.

Each player in Dixit will get a series of cards with interesting pictures painted on them. In turns, each player will say a word that describes the picture that they will be putting.

The other players will choose the picture that most closely resembles that word from their own cards and put them down. Players will then vote to guess which picture is the original, whoever guesses correctly gets a point. The person who gets the most points wins.

It’s a game that is simple in premise but very fun and incorporates the same level of guessing and doubt that many of the other games on this list have and also games like Werewolf. So if you’re looking for a great addition to your game nights, Dixit is a fun option.

Love Letter is an excellent and simple social deduction party game is it is a great game to play if you’re looking for a fun game for a few people. Love Letter plays 2-4 players and it takes about 15-20 minutes to complete a round.

This game is great for those looking for a quick game to learn that is still quite fun and interesting. The general premise is that you are in a royal court and players are trying to get a love letter delivered to a distraught princess. Each card has a value assigned to it and at the end of the game, the player with the highest value card wins the game.

The game can be learned in about 2 minutes, however, it is quite enjoyable to play for a least a few rounds and is sure to keep your smaller board games groups entertained.

If Love Letter above is a great option for its small capacity and simplicity, the Mascarade is an excellent choice for those looking for a complex game like Werewolf that can play a lot of people. This game can play 4-12 people and it takes about 30 minutes to finish a round.

Like the majority of hidden identity games, Mascarade assigns each player a different identity. Where it differs, however, is that each player will announce the identity to the table at the beginning of the game and you are not allowed to look at who you are for the remainder of the game.

There are numerous instances throughout where you can swap your identity, someone can take it from you, and so on so there is a lot of confusion about who is who — even to yourself!

There are a lot of rules and layers to this somewhat complex game, however, once you figure it out, it can be a lot of fun and it is the perfect addition to round out this list of party games similar to Werewolf.

Two Rooms and a Boom

If you’re looking for an ideal party game similar to Werewolf that can play a ton of people, the Two Rooms and a Boom is an excellent choice for you.

This game can actually play up to thirty players, however, it is just as fun and possible to play with three or four people. So no matter what size your board game group is, Two Rooms and a Boom is a great game to have.

The game can be far more complex than this, however, and there are lots of different identities with various abilities and powers, meaning that it can be a raucous game with your friends. So if you’re looking for super fun party game like Werewolf, make sure to include Two Rooms and a Boom for your board game nights.

Finding fun and interesting social deduction games like Werewolf isn’t all that hard to do. Hopefully, this list of great tabletop games will help make your game nights more enjoyable for months to come!

Are you looking for more games similar to Werewolf? Have any suggestions that didn’t make the list? Let us know in the comments! 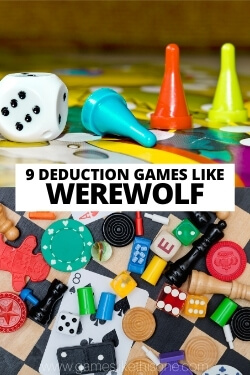