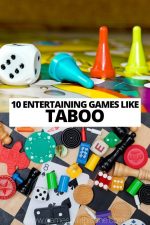 Games like Taboo have been exciting and entertaining families from their release. Encouraging players to think on their feet and expand their vocabularies, Taboo combines education with a lot of riotous good fun, making it the perfect game to play with your family. But are you sick of playing Taboo and are searching for more games like it to spice up your game nights, we’re here to help!

There are countless games similar to Taboo that combine either word knowledge or timed guessing that will keep you and your friends or family on their toes have having a whole lot of fun! So if you’re on the hunt with more exciting and entertaining board games like Taboo, look no further — we’ve got you covered!

No list of games like Taboo would be complete without including Pictionary. Though it isn’t a word-game, this classic party game combines a lot of the same elements as Taboo and is sure to be a family favourite if you haven’t included in your collection just yet.

If you’re unfamiliar with Pictionary, the general concept is incredibly simple. Players break into teams and with each turn, a player from each team must draw from a deck of cards and sketch out the prompt they see in a limited amount of time.

Their teammates must guess what they’re drawing, and the first team to guess, wins the round. Much like Taboo, you cannot talk or write down the word you are trying to draw and a lot of winning really depends on your creativity!

So if you’re looking for another classic game like Taboo, then you really should consider adding Pictionary into your game-night rotation.

If you love word games and are looking for more word games similar to Taboo, then Scattergories is an excellent choice for you.

Another fantastic game that will have you thinking on your feet and scouring your brain for those vocabulary words that you may have forgotten, Scattergories is a perfect addition to any of those lovers of Taboo.

Suitable for 2 to 6 players, Scattergories is played by rolling a 20-sided die (each side with a different letter written upon it) and determining twelve different words from different categories.

At the beginning of each game, each player is given a pad of paper with three columns of with we’ve different spaces in each column. Each space has a different category assigned to it.

Each round, the die is rolled and you must write, as quickly as possible, a word that starts with the letter the die has landed on in the corresponding category. The player who has done this the quickest wins the round.

Great for thinking and improving your vocabulary, Scattergories is a great game for both kids and adults alike.

Another fun word game, Catch Phrase takes a departure from board games like Taboo and moves into a fun, hand-held electronic game that is loads of fun for the whole family. The concept of Catch Phrase is wildly similar to Taboo, however, and fans of the latter game are sure to enjoy it!

Each round, the device will display a common or well-known phrase and it is up to the person holding the device to describe what the phrase is to his or her teammates.

Obviously, you cannot use any of the words that are in the phrase and you will only have a limited amount of time to describe the phrase. At the end of the game, the team who guesses the most phrases correctly, wins.

Much like Taboo, Catch Phrase makes you thin on your feet and work on describing things without using “taboo” words!

Of course, no list of word games would be complete at all without including Scrabble, one of the world’s most popular and well-known word games. Though it isn’t as fast paces, it can be just as contentious as Taboo and very welcome on this list of games like it.

If you’re somehow unfamiliar with Scrabble, here is a brief overview of how the game works: basically, players draw from a bag of tiles with letters on them and they must build words on the board from the letters they have drawn.

Each letter has a different point-value and various squares on the board also have different point values depending on the word or letter that has been placed there (ie, you can get double or triple the points on a letter or word depending).

Players must build words in a crossword-style until the tiles have been depleted and, at the end of the game, the player with the most points, wins! Scrabble is a great game because you need not only have a large vocabulary to remain competitive, but also know strategically where to place certain letters to get the most points from each tile placement.

A relatively new game that has taken the world by the storm, Codenames is the perfect addition to your collection if you’re on the hunt for more great board games similar to Taboo.

Another word game that that has you guessing and has some people forbidden from saying certain words, Codenames is a simple game that is also really really fun.

The general concept is very easy: players break into two teams and select a “spymaster” from each team. The game consists of cards with various words printed on them and laid out in a grid pattern. The spymasters select a handful of cards that they want their teammates to choose and give them a hint that describes the words but doesn’t give it away.

Much like Taboo, spymasters can’t say the word they want their teammates to choose or anything too similar to it. It is a very fun game with a few iterations that is sure to entertain anyone who sits down to play it.

If you love the guessing aspect in games like Taboo but wish it was number-focused rather than word-focused, then you’re sure to love Decrypto! This code-cracking board game is an excellent choice for those looking for a game similar to Taboo but want to decode numbers in order to guess words.

The general idea of this game is very simple. Players divide into teams and one player from each team comes up with a coded message that their teammates must decode. The team that decodes the most messages (codes are numerical and correspond with phrases), wins the game!

Decrypto is a fun and entertaining game that is sure to thrill you as much as a contentious and riotous game of Taboo.

A departure from words or numbers altogether, Dixit is a game that is similar to Taboo but has its own artistic spin that makes it all the more fun and whimsical.

Dixit is simple and easy to play, meaning that new players can pick it up really quickly. Basically, each player is dealt a hand of cards with vague and somewhat magical images drawn on them. In turns, one player at a time silently selects one of their cards to describe with a word or phrase.

From their hand, each player will select a card that they think best fits with the word or phrase that has been stated. All of the cards are shuffled, face down, and then turned up and players must then vote on which card they think was the original.

Much like Taboo, there is a bit of guessing and you need to be descriptive in this game. It is sure to be a favourite amongst young and old alike.

This game is great if the reason you love Taboo is the time limit and the frustration that may happen when you struggle to adequately describe your word to your teammates. Telestrations combines elements of Pictionary with the classic playground game of Telephone ensuring a night of good laughs and good times.

At the beginning of each turn, one player on each team will draw a card with something they need to draw. A sand timer is turned, and they must draw whatever it is they must in that given period of time.

Once the time is up, the player must pass the pad of paper to the next teammate and they must complete the drawing based solely off of what has been drawn before them.

Of course, drawings can end up hilariously wrong from the initial concept, however, the team that is the closest to the original prompt will win the round.

If you’re looking for games like Taboo but wish that it is was a bit more physical while still exploring the same themes, then Guesstures is a great option for you! A riff on the party game classic Charades, Guesstures is sure to be a crowd-pleaser for fans of Taboo.

Players split into two teams and each turn, one player will draw a card with two words or phrases printed on it. One phrase is easier and one is harder and the harder one is worth more points.

The player will decide which phrase or word they want to act out and, in a very limited amount of time, their teammates must guess what is is they are acting. The actor cannot say anything, much like in Taboo where you can’t say the word to too many words like it.

Guesstures is often billed at Charades on “speed” and it is sure to thrill and excite all of those who are looking for games similar to Taboo.

If you’re looking for a fun and dynamic game like Taboo that also combines elements of countless other family-favourites, then Cranium is the game for you!

Taking things from classics like Charades, Pictionary, Trivial Pursuit and many other games, Cranium really prompts players to use all aspects of their brains and creativity to allow for a great and fun game.

Suitable for four or more players, there are four sections involved in any Cranium game: Data Head, Word Worm, Star Performer, and Creative Cat. Players must successfully complete tasks in each section in order to win the game.

Data Head will contain things like trivia questions or math problems, Word Worm make you guess words and use their vocabulary, Creative Cat will make you draw or sculpt, and Star Performer will make you act or sing.

If you like Taboo but wish there was just a little bit more to it to make it more holistic and entertaining, then Cranium is definitely the game for you!

There are countless games like Taboo that are sure to keep you entertained and having fun for many and more game nights to come!

Are you searching for more board games or word games similar to Taboo? Have any recommendations that didn’t make the list? Let us know in the comments! 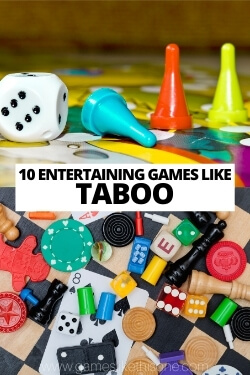