A popular card game at adult parties and game nights, Incohearent is a game about speaking and understanding gibberish. The rules are simple. One player acts as a judge and reads a seemingly nonsensical phrase off a card. The phrase sounds similar to a real phrase on the back of the card – such as ‘ham a sauna let’s uh’ for ‘Amazon Alexa’.

You might be looking for games like Incohearent because you’ve played it so much that you know all of the cards. Or you may simply be looking to expand your collection of party games. Either way, this list of fun party games will have you covered.

Incohearent is an ‘adult’ party game as there are NSFW cards in the mix. In this list, we’ll offer a mix of family-friendly and adult-only party games and tell you which is which throughout.

If you enjoy fast-paced party games like Incohearent, Anomia is a fun-filled card game that both families and adult parties will enjoy. In this 3-6 player card game designed by Andrew Innes, players must think fast to come up with words on the spot.

Players take it in turns to draw from the draw piles filled with cards with words and symbols on them. The words are categories such as ‘type of cookie’ or ‘a 3 letter word’.

If a player draws a card and its symbol matches a card that another player has in front of them, they must race to say something that fits the category on their opponent’s card (such as ‘Chips Ahoy’ or ‘Red’).

Anomia is quick, lots of fun, and will have players stumbling over words at your next party.

Evan Jaroslow’s QuickWits is a 3+ player party game that is a great alternative if you’re after games similar to Incohearent. The game is almost identical to Anomia but more adult in its themes – not one to play with the kids.

Like Anomia, cards have symbols and categories on them and players race to name something in their opponent’s category when they draw matching symbols. If you like Anomia but want a more adult version, QuickWits is the game for you.

What Do You Meme?

Before Incohearent, there was What Do You Meme? from the same publishers. Designed by Elie Ballas, Ben Kaplan and Elliot Tebele, What Do You Meme? is a 3-20 player game that is essentially a meme version of Cards Against Humanity.

Each round, one player is the judge and shows everyone a photo card with a potential meme on it. The players then choose a caption card from their hand and secretly give it to the judge, who shuffles the cards, reads out the captions, and decides on the best caption.

Many of the cards in What Do You Meme? are NSFW, so this is a game for adult parties rather than family games nights (unless your kids are 17+).

Already know and love this game? Check out our list of games like What Do You Meme?!

Taboo is an old-school party game that many who went to parties in the 90s will remember. Designed by Brian Hersch and released in 1989, Taboo is a classic party game for 4-10 players that will fill an Incohearent-shaped hole in your life.

Players work in teams and take turns describing words or phrases on cards without using the five ‘taboo’ words. The opposing team uses a buzzer to stop the player when the time runs out as well as take their card if they use gestures or a ‘taboo’ word.

Taboo is a simple but rewarding party game and one that can also be enjoyed by families with kids over 12.

Another old-school party game on this list, Scattergories was released in 1988 and is great for small parties or families of 2-6 players looking for games similar to Incohearent.

Each round, players have a list with 12 categories, such as ‘a boy’s name’ or ‘breakfast food’. A dice is rolled to tell players what letter each word they choose for each category on their list must begin with – so B might mean you write ‘Brian’ and ‘bacon’.

Players write down their 12 answers and then compare. No points are scored for answers that come up more than once but unique answers score you one point. The game is played over three rounds with three different lists and the player with the most points wins.

Scattergories is a classic for a reason. Friends and families have been enjoying this game for decades, so if you’re after games like Incohearent, why not give Scattergories a try?

Medium is a fun party game suitable for families and adult parties. Designed by Danielle Deley, Lindsey Sherwood, and Nathan Thornton, Medium is a 2-8 player card game that is all about melding your mind with someone else’s.

Medium is a fun, lightweight party game that friends or families looking for games like Incohearent will love.

That’s What She Said

If you and your friends love innuendos, That’s What She Said is a fun adult party game that anyone after games similar to Incohearent will enjoy.

The rules of That’s What She Said are very similar to games like Cards Against Humanity. Out of 4-10 players, one player is the judge and reads a red ‘setup’ card – such as, ‘while going under, I heard my dentist say…’.

The other players have five white phrase cards in their hands and secretly give their best phrases for the setup to the judge, who shuffles the cards, reads them out, and then chooses their favourite.

Obviously, That’s What She Said is a game for adult parties rather than family game nights! So long as everyone is on board with playing this NSFW game, it’ll provide lots of fun and laughter at your next party.

If you’re searching for games like Incohearent, Off Topic could be your new favourite. This 2-10 player game is another adult party game on this list – so not one for the family.

The rules are very similar to Scattergories. Players get a list of topics and a letter that their answers must begin with. Their answers are written down on whiteboards and points are only scored for unique answers. This is played out over five rounds and the player with the most points wins.

Off Topic is an NSFW version of Scattergories and is great for parties!

Another fun, fast-paced party game, Give Me 3 is another adult party game that is great for anyone after games similar to Incohearent. There are NSFW cards in there, but these can be easily filtered out if you want to play this game with your family!

Each round, one player reads out a card that asks the player to the left to name three things – such as ‘three things that smell bad but taste good’.

The player to the left must think of their most creative and funny answers in 10 seconds and if successful they win the card. The first player to get 10 cards wins.

Anyone after fun, fast-paced, and silly games like Incohearent will find plenty to love in Give Me 3 and it could become a staple at parties.

Thomas Dagenais-Lespérance’s 3-8 player party game, Decrypto, is great if you’re after games similar to Incohearent but you and your friends want something a bit more complex.

A clue giver on each team will draw a three-number code and try to get their team to figure it out by giving clue words similar to, but not identical to, the keywords. For example, for 241, the clue giver might say ‘bacon – insect – dark’.

Whilst they do this, however, the other team is listening in. The other team can intercept clues once they figure out what the keywords are likely to be and steal their opponent’s cards.

Decrypto is a great party game that can also be enjoyed by families with kids aged over 10-12.

Games like Incohearent are great for parties as they are fast-paced, easy to learn, and silly. The games on this list are filled with opportunities to laugh with your friends or family at your next party or games night. Be sure to check age suggestions if buying for your family though – as not all of these games are kid-friendly!

Are you looking for more games similiar to Incohearent? Have any recommendations that didn’t make the list? Let us know in the comments! 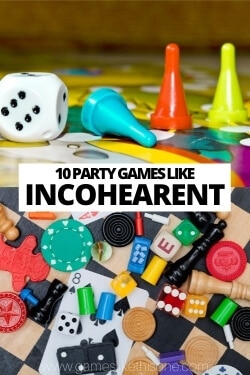