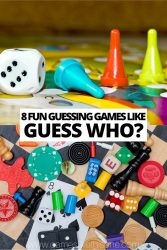 Many of us grew up playing board games like Guess Who?. This classic 2-player guessing game was released in 1979 and has been a staple at afterschool clubs ever since.

Created by Ora and Theo Coster, Guess Who? gives each player a board with images of cartoon character facing up.

Whatever reason you’re searching for games similar to Guess Who?, this list of 8 fun guessing games has something for everyone.

If you enjoy using visual clues in Guess Who?, Dixit is an excellent alternative. Designed by Jean-Louis Roubira and with gorgeous art by Marie Cardouat, Dixit is a fun 3-6 player card game suitable for players aged 8+.

Each round, one player is the ‘storyteller’. The storyteller will look at the cards in their hand, which depict dreamy and unusual images, and choose one to tell a one-sentence story about.

Each other player will then choose a card from their hand that they think fits with the story told. All the chosen cards are shuffled and placed on the table for everyone to see. Players must then guess which card belonged to the storyteller.

Dixit is a simple yet elegant card game and is a fun alternative to Guess Who? for families or friends looking for a new game.

If you searching for board games similar to Guess Who?, you can’t go wrong with the murder-mystery classic, Clue. Released in 1949, Anthony E. Pratt’s Clue has been enjoyed by families for decades.

In Clue, 2-6 players take on the role of detectives investigating the murder of a butler in a mansion. The players must determine who committed the murder, where the murder took place, and what weapon was used.

The truth is decided using cards – the three answer cards are kept in a secret file and players receive the other cards and keep them secret.

Players then move around the mansion on the board and can make accusations. For example – a player accuses Mrs White of murdering the butler in the Library with the Candlestick, if the player to their left has one of these cards they must secretly show it to the accuser.

Players use deductive reasoning based on the cards they and their opponents hold and can eventually make a final accusation. Clue is a popular board game with families and can be enjoyed by kids over 8.

Guess in 10 – Animal Planet is a great game if you and your young kids are looking for games like Guess Who?.

This is a card game that combines fun with learning and is suitable for kids aged 6+. It has 52 cards, each with a different animal – from domestic cats to wild dolphins.

In Guess in 10 – Animal Planet, 2-6 players try to guess what animal is on the clue card by asking up to ten yes or no questions.

You could ask, ‘is it a carnivore?’ or ‘is it a domestic animal?’. By asking questions, you can figure out what animal is on the card and if you guess correctly you win the card. The first player to get 10 cards wins the game!

Guess in 10 – Animal Planet is a simple and fun way to teach kids about animals. This small game is also great for taking on trips or to friends’ houses. Guess in 10 has other versions too, including Countries of the World and States of America.

Mysterium is another fun mystery game that is great if you’re looking for games similar to Guess Who?. Suitable for gamers aged 10+, it is a 2-7 player board game designed by Oleksandr Nevskiy and Oleg Sidorenko.

In Mysterium, one player will become a ghost who has been murdered. The other players are mediums who are trying to figure out who the ghost was killed by, where it happened, and what the murder weapon was.

The ghost, however, can’t remember the murder and is unable to speak. Instead, the ghost must communicate with the mediums through strange and abstract images on cards.

Each medium will follow a line of inquiry and use these cards to determine the suspect, the location, and the weapon. Once the players have each determined this, the ghost can choose a line of enquiry and give the mediums a final vision.

Mysterium is a fantastic cooperative board game. And the weird and wonderful art by Igor Burlakov, Xavier Collette, Nevskiy, and Sidorenko really adds to the atmosphere of the game.

Spyfall is an excellent card game that anyone looking for alternatives to Guess Who? will love. In this 3-8 player game, each player receives a card with the same location on it (a pirate ship, a casino, and so on).

One player, however, gets a card that says ‘spy’ on it. The players then take it in turns to ask probing questions like ‘how did you get here today?’ or ‘what do you see outside the window?’.

All players except for the spy know the location, so should be able to answer these with ease. The spy, however, must listen carefully and try not to get caught out. If the other players find the spy, they each score points. If the spy figures out the location before they are caught, however, they win points instead.

Designed by Alexandr Ushan and suitable for players aged 12+, Spyfall is a game of bluffing and guessing. If you have older kids and are looking for games similar to Guess Who?, the whole family is sure to enjoy Spyfall.

Love Letter is a speedy card game that anyone after games like Guess Who? will enjoy. Love Letter is designed by Seiji Kanai, playable by 2-4 players, and suitable for gamers aged 8 and above.

Each player is a bachelor seeking the hand of Princess Annette. The princess is locked away in the palace and players must compete to get their love letter to her before the other players.

Love Letter is made up of 16 cards numbered 1 to 8. The number indicates how close the person on the card is to the princess – 1 being a guard and 8 being the princess herself. One card is removed from the game and players are each dealt a card from the deck.

Each round players play their card, which each have different effects such as calling out another player and correctly guessing which card they have to eliminate them from the round. The last player standing gets a love token, which, depending on the number of players, win the game once you have enough.

Love Letter also has other fun versions, including a Marvel edition!

In Codenames, 3-8 players are split into two teams. One player becomes the ‘spymaster’ and lays out 25 cards on the table. Each card has a different word on it and the spymaster has a secret keycard showing them which words they need their team to find.

The spymaster can give their team clues for which words they need to find.

For example, if the team needs to find ‘Hollywood’ and ‘Millionaire’, the spymaster could say ‘celebrity 2’ to indicate there are two cards relating to ‘celebrity’ that are needed. Players must be careful, however, as there is one assassin card which if found will give the other team the win.

Codenames is recommended for players aged 14+, but kids aged 8 and above could still enjoy this with the help of adults.

If you’re hankering for board games similar to Guess Who?, Just One could become your new favourite.

This speedy 3-8 player game is designed by Ludovic Roudy and Bruno Sautter and is suitable for players aged 8 and above. It is a great cooperative party game in which players must give clues for and guess mystery words.

Every card in Just One has five words on it. Each round, one player is the guesser and chooses a number between 1 and 5. The other players then write on a whiteboard a clue for this word. If any of the given clues are identical, they are removed.

The game has 13 rounds played over 13 cards. If the guesser gets the word right, you all gain a point. If they get it wrong, that card and the next card in the deck is removed, so you all lose 2 points.

Just One is a fun word-guessing game that is great for families or groups of friends who are after games like Guess Who?.

The rules of Guess Who? are delightfully simple. Deduction and a good dose of guessing is all you need to get by. This list of games offers options for all ages and groups. Whether you like asking probing questions, bluffing to your opponents, or giving perfectly chosen clues, our list of board games similiar to Guess Who? offers fun for every gamer.

Are you looking for more games like Guess Who? Have any recommendations that didn’t make the list? Let us know in the comments! 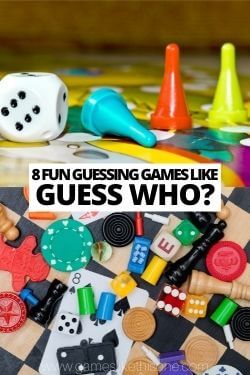