Descent is a dungeon-crawler epic that has fit well into the collection of all tabletop adventurers for many years now. So, it makes absolute sense that you’re looking for board games like Descent. You must have played it a thousand times now.

With a light sprinkling of role-play gaming and strategizing and a liberal scoop of sadism on the part of the Overlord it’s hard to get tired of a classic but here are some titles that will spice up your table without changing the script completely.

You won’t be disappointed, all of the games we will be suggesting in this article will contain the classic mix of puzzles, traps, monsters and heroes that make this kind of board game so enticing.

One Deck Dungeon: Forest of Shadows

One game similar to Descent but with a fresh take is One Deck Dungeon: Forest of Shadows. It can be run as a solo game or done with two players and is an excellent dungeon-crawl experience that occurs in a randomised forest.

Players character cards will determine the dice pool they’re allowed to work with throughout the game and with it, they will work their way through an assortment of different foes, poisons and perils to gain rewards. As they continue through it they will see harder challenges — and a dungeon boss! — until they make their way through the entire deck.

This game is different every time it’s played because of the random order of the deck and different characters you can play so it makes a nice little investment that will keep giving new experiences.

In Mice and Mystics, one to four players will work together to get out of a castle.

However, the players will be surprised to take on the role of heroes turned to mice who need to overcome the countless perils that might befall the very small, not to mention their ferocious furry foes the rat guards, the cockroaches and a housecat who lives in the castle.

The mice are able to become more powerful by collecting crumbs of cheese to gain new abilities and fight more effectively.

This is also a game that can be played over multiple sessions, players continue with the same character items and development so this can offer some long-term enjoyment with a prolonged series of game-night.

An app-driven board game is still a somewhat futuristic idea despite us being in the 21st Century. However, the modernity of Mansions of Madness is what makes it such a great suggestion for those looking for board games similar to Descent.

This can have up to five players on the board at once and the app will manage monster damage, effects and narrate the game for the players in the role of what was a keeper in the first edition.

This means that all the players need to do is follow the mystery and try not to get too scared. Which might prove difficult when they find themselves wandering the monster-infested halls of this cursed mansion.

This stylish, bleak black-and-white horror-inspired dungeon crawler is quite the looker, with beautiful illustrations, exotic-looking D6s and two different sized decks. For anyone who’s excited by uniquely styled titles, Escape the Dark Castle should be your choice for a board game like Descent.

In this game, one to four different players will take on the role of prisoners trying to break out of the titular castle and must agree between themselves who should take the next turn overturning Chapter Cards and moving through the castle, how the group should react to each situation and who should receive which items.

Once again, this game has a number of different ways it can go so it keeps it’s novelty far past the 10th or 30th play.

Arcadia Quest veers to a slightly younger audience with its game board and miniatures done in an iconic cartoonish style that draws the eye in. But it still has just as much violence as you’d expect from a board game similar to Descent.

Two to four players will make competing guilds using three heroes each to try and clear the land of all the monsters in the area so that they can take control. They also want to clear out the opposing guilds, they’re just more people to wrestle for domination.

Players will be trying to complete a series of quests in order to win a scenario by games end but, unlike most younger-aimed games, they can be picked up again later with winners choosing where to move the campaign next.

This game that’s not stopped being talked about since it first launched and there’s a reason for that. Just like Descent, this classic is a peak example of optimal cooperative gaming, taking one to four players on an epic adventure that will last many game nights.

I would suggest this game for someone who has played a lot of other games like Descent and now that they’re familiar with the genre is looking for something innovative and dense. Because that is Gloomhaven all over.

With a lot to learn from level-dependent decks, health and exhaustion to keep an eye on, alternating card use; this isn’t a game for the player who faints at the sight of a rules booklet. But if you want to meet the daddy of dungeon-crawlers then look no further than this mammoth game.

Mage Knight, just like Gloomhaven, is very complex and not something I would say the board game novice needs to pick up. But for those who have been around the block, this is a very fun take on the roleplay-inspired board game like Descent.

In this game, one to four players will each be working as an extraordinary Mage Knight that will be bolstering armies to fight monsters, collect artefacts and conquer lands as they travel.

Players will have decks filled with their abilities that they can try to grow throughout the run of the game. They will be able to buy their characters spells and influence and level up as they go along the way as well.

Players can choose from many different scenarios to play and different ones are either cooperative or combative so there’s room for tricksy behaviours or group tactics.

Welcome to the Dungeon

Almost the opposite of the last suggestion now, we have Welcome to the Dungeon, a very simple game that allows two to four players to gamble with their lives.

Instead of making their way through the dungeon step by step in this push-your-luck game players will build up the difficulty of the dungeon by each placing different monsters down to make a dungeon pile and will lower it along with their own strength by giving up their own weapons as sacrifices.

The bravest player, or the unluckiest, will be the last to not pass on the betting pool and they will then have to take on the entire dungeon pile with whatever equipment they have left and their character card.

This can be one nail-biting and hilarious game like Descent, but it’s speed and easy ruleset make it a great game to pull out at parties.

You probably thought a list of board games like Descent was already nerdy enough, huh? For fans of both science-fiction and strategy board games, there could not be a better choice than Star Wars: Imperial Assault.

In this one, players will take on the commanding role of the Galactic Empire ready to destroy and the one to four remaining players who are heroes of the Rebel Alliance trying to make their way through a campaign of separate storylines.

There is an option to play the Skirmish Mode which is a one-shot and a smaller number of players but either way, it’s an exciting adventure for anyone who’s especially into either franchise or its genre.

Finally, I couldn’t finish this list without suggesting the game that started it all. First coming out in 2005, Descent was actually based on the Doom: Board Game based on the video game and very well-received.

It has continued to be improved on from that starting point to Descent and then to a number of new editions of Doom that have become well-loved today.

In this game, much like in the board game Descent, one player will be in charge of the demons, working to create a more dangerous board for the other players who will be taking control of marines. This game can have two to five players take part in this epic battle between the legions of hell and this small battalion of marines.

The game also has some amazing design choices and very high-quality product as you’d expect from such a famous IP.

All of these suggestions for board games like Descent bring together the game’s greatest features. From the cooperative nature, or semi-cooperative in the case of a Dungeon master, to the levelling, to the quickfire thinking needed to finish these dungeons alive. It really is an amazing time for people looking to pick up board games as excellent dungeon-crawlers just keep being released.

Not to mention all the other Descent titles that are out there for you to discover like Descent: Tomb of Ice, Descent: Sea of Blood, Descent: The Road to Legend and Descent: Altar of Despair. I know that you’ll be pleased with any one of these choices so get to picking!

Are you looking for more games like Descent? Have any recommendations that didn’t make the list? Let us know in the comments! 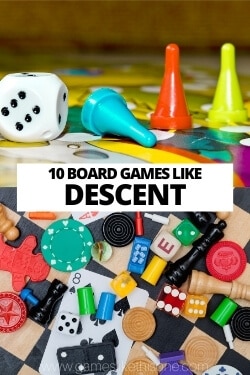