Love it or hate it, there is no denying that Monopoly is one of the most popular and well-known games out there on the market. Because of this, many people are constantly searching for more great board games like Monopoly to scratch their capitalistic itches. For some reason, there is a lot of hate about Monopoly out there, but if it’s a game that you and your family enjoy playing then make sure to own it and love it!

Since it’s inception, Monopoly has been immensely popular for its brutal representation of absolute capitalism and it can definitely make or break friendships, while also teaching children the value of money and instilling some important finance skills. So if you love this classic board game and are looking for more great games like Monopoly, these nine board games are sure to make your game nights a blast!

If you love Monopoly but don’t want to sacrifice hours to buy and sell properties and destroy your teammates, then Monopoly Deal is the game for you! This card game has the same concept as Monopoly but in a much simpler and much faster package and it is sure to bring fun and excitement to your game nights.

This game used the same properties and aesthetic as the traditional Monopoly board game but concentrates solely on the buying and selling of properties and it makes for a much faster-paced game that is a fantastic addition to any family game nights. If you love Monopoly but wish is was quicker and had less of an “elimination” element, the Monopoly Deal is the game for you.

The Game of Life

Another classic board game that has been a family favourite for decades, The Game of Life is an excellent choice for those looking for board games similar to Monopoly. Great for children as young as 6 or 7, this game isn’t quite as brutal and capitalistic while still teaching how to handle currency, deal with life’s curveballs, and navigate obstacles while going through life!

The premise of The Game of Life is that, with each turn, you reach different milestones in “life” including getting married, paying taxes, having children, paying bills, etc. There are both positive and negative things that you can land on and, much like Monopoly, whoever has the most money at the end of the game wins.

However, unlike Monopoly, the game ends when you reach the end of the board and not when every other player but the winner inevitably reaches complete financial ruin.

A fun and dynamic family board game that has similar concepts to that of Monopoly, The Game of Life is perfect to include in your repertoire.

If you love Monopoly for the concept of building an empire (so to speak), then you’re sure to like Catan. This game has been well-known to board game geeks since its release and it is an excellent choice for those looking for similar games to Monopoly.

The general concept of Catan is that the players all represent colonisers who are settling an island (called Catan). Various curveballs get thrown your way and it is a bit more complex and nuanced of a game than Monopoly, so it may be better to play with older children rather than younger ones.

Catan has a cult following and is a favourite board game amongst enthusiasts and therefore there are countless expansions packs and different variations of the game meaning that it will keep getting better and better the more you keep playing and adapting. So if you love the idea of building a society and the economics that may go along with it, like in Monopoly, then you’re sure to love Catan.

If you’re searching for games like Monopoly because you love the concept of building a world and getting ahead based on the cards dealt to you, then Carcassonne is a great game for you. The concept of this game is quite simple but it is incredibly fun and it is great for players young and old.

Basically, the concept is you get dealt cards that can help you build roads and cities and towns. Named for the medical walled city in the south of France, this game as a medieval theme and is great when it comes to knowing how to use your tiles to your advantage to build the best roads and cities that are needed.

While it doesn’t have quite the same cadence of Monopoly and there are no dice that are rolled and no board to move your pieces upon, the act of building upon each turn is sure to delight the most ardent of Monopoly fans. So if you’re looking for a great game to add to your collection, make sure to pick up a copy of Carcassonne.

Following the same theme as Carcasonne mentioned above, if you want another board game similar to Monopoly, then Railroad Ink is a great option for you. If you love buying all of the railroads to win at Monopoly and wish there were more games that were train-centric, then you’re sure to love Railroad Ink.

The premise of this game is pretty simple and it is a bit of a puzzle game to open as many exits to your railroad as possible and to do it faster and better than your opponents. Going off of themes of building like in Monopoly, this is a great game if you’d rather finish a game in about 3o minutes rather than a few hours.

Railroad Ink is perfect for ages 8 and above and can accommodate anywhere from 2-8 players, making it the perfect addition to family game nights, especially if you’re all on the hunt for more games like Monopoly.

If you like long, complicated games and that’s what you’re searching for while after more board games similar to Monopoly, the Power Grid may be a great option for you. This board game takes about two hours to complete and is a lot of fun while you’re playing it!

Perfect for anywhere from 2 to 6 players, Power Grid has a very simple premise: to supply as many cities with power as possible. However, there are various obstacles and curveballs that are thrown at players throughout the game, letting players know the harsh reality of life, much like in Monopoly.

It is also similar to the classic board game is the fact that players must purchase plants to be able to supply various cities and municipalities with power during the game.

This long and complicated game is best for players ages 12 and up, however, if you’re willing to take the time, it is an excellent addition to family games nights and is a great option for those who are looking for some of the best board games like Monopoly.

If Monopoly is somehow too short of a game for you, then you probably would delight in inviting Risk into your board game collection! This is a classic board game that many people already know quite a bit about, but I’ll talk about the premise anyway.

Kown as the game of world domination, Risk is a long and complex game that is perfect for those who love strategy and planning, a major complaint that people say is missing in games like Monopoly. The eventual goal is to conquer the world and to be the first one to do this.

Players are dealt various attack cards and action cards throughout the span of this game and you can expect it to last about 2 hours — longer, depending on the amount of players you have and if you incorporate any of the common house rules out there, as well.

All in all, though they’re by all means not the same name, many people who like Monopoly also love to play Risk.

Already love this game? Make sure to check out our list of more board games like Risk!

Where the original version of Monopoly is based off the streets of Atlantic City, New Jersey, Lords of Vegas is a game that gets players to develop the burgeoning Las Vegas, Nevada and it is a great alternative if you’re on the hunt for more board games similar to Monopoly.

Much like Monopoly, players begin with a certain amount of money and, with each turn, they have the opportunity to develop the iconic Vegas Strip by buying casinos and hotels, etc. By the end of the game, whoever has the most “victory points” has done the most building of casinos, wins, similar to in Monopoly.

Great for players ages 12 and over and accommodating 2-6 players, this is a great game for families and groups of friends. The entirety of the game takes about an hour to an hour and a half, so it also isn’t quite as long as Monopoly, but it is still a great game to play to occupy an evening.

If you’re searching for games like Monopoly because you love the business and real estate development side of the classic board game, then you’re sure to love Suburbia. A fairly new addition to the board game universe (the game was released in 2012), this game is perfect for fans of Monopoly but who are searching for something just a little bit different.

The premise of Suburbia is that each player is a neighbourhood developer and they’re all trying to build the perfect and best community. Much like some of the other games mentioned above like Carcasonne and Railroad Ink, it is a tile-laying game where you build upon your neighbourhood with each turn. Accommodating 1-4 players and lasting about 90 minutes from start to finish, this game is great for families because it can be appropriate for children from ages 8 and up.

The goal of the game is to end with the neighbourhood with the highest population and because of all of the variations, it is close to impossible to play the same game twice!

So if you’re interested in building and development, then Suburbia is an excellent game for you to pick up and play!

There are a lot of board games like Monopoly out there that are sure to delight even the most ardent of Monopoly sceptics. Whether you love the game for its real estate properties or is complex nature, you’re sure to find something worthwhile in these nine games, as well.

Are you on the hunt for board games similar to Monopoly? Have any suggestions that didn’t make the list? Let us know in the comments! 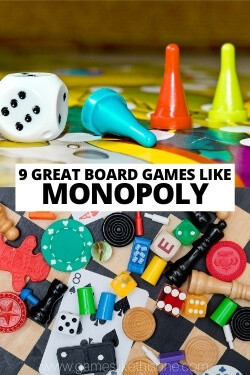