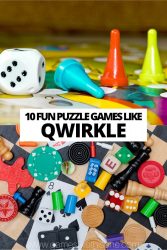 If you’re on the hunt for fun, puzzle games like Qwirkle, you’ve come to the right place. Qwirkle is an abstract puzzle game designed by Susan McKinley Ross and playable by 2-4 players.

Qwirkle has 108 colourful wooden blocks with six different shapes in six different colours on them. The first player can place blocks on the table that have a matching attribute (e.g. same shape or same colour).

The players then place blocks next to what is on the table so long as they also share an attribute. When you have played a block you draw from the draw bag so that you always have a hand of six. You can also use your turn to trade in blocks for random blocks from the draw bag.

Points are scored for playing blocks and for completing lines containing all six shapes and all six colours. The game ends when the draw bag is empty and the player with the most points wins.

Qwirkle is a simple yet rewarding strategy game that everyone from kids to seasoned gamers will enjoy. If you’ve been playing Qwirkle non-stop, it might be time to check out our list of 10 board games that are similar to Qwirkle.

If you’re hankering for board games like Qwirkle, Ingenious is the game for you. This 1-4 player game is designed by Reiner Knizia and is loads of fun for both families, friends, and regular gamers.

In Ingenious, players have a hand of tiles that are two-coloured hexes. On their turn, players can play one of these tiles and attempt to make a line of tiles of the same colour on the board.

There are six colours and players must try to create a line of every colour. Players are scored at the end of the game by which colour they advanced the least.

Ingenious is easy to pick up but has plenty of replayability. If you love Qwirkle, Ingenious is the best game to try next.

Blokus and Qwirkle are often lumped together as fun, family-friendly abstract strategy games. Designed by Bernard Tavitian, this 2-4 player game is sure to excite anyone after games like Qwirkle.

Each turn, players lay colourful, translucent game pieces. Each player chooses one colour and, when laying them, they must touch each other on one of their corners but not on a flat edge. The game ends when none of the players can place another piece.

When the game is over, players get points for each square their pieces occupy on the board. The player with the most points wins. Blokus is simple yet very strategic, making it the perfect game for families or friends looking for something like Qwirkle.

Yinsh is a fun 2-player game that fans of Qwirkle will adore. Designed by Kris Burm, Yinsh is an abstract strategy game suitable for players aged 9 and above.

In Yinsh, each player starts with five ring-shaped pieces on the star-shaped board. The aim of the game is to remove three of these pieces from the board. Each turn, players place a marker inside one of their rings.

They can then move the ring away from the marker into a vacant space either adjacent to them or in a ‘jump’ over markers that are connected.

You can remove rings from the board by getting five markers of your own colour in a row placed on the board. This game is simple but packed with strategy and is sure to cause plenty of tension when you and your kid, friend, or partner are playing.

Dirk Henn’s Alhambra is a 2-6 player game that anyone after board games like Qwirkle will enjoy. Alhambra is suitable for players over 8 years old, but this game is plenty of fun for seasoned adult gamers too.

In Alhambra, players are trying to fill their ‘Alhambra complex’ with as many building tiles of different types as possible. Players take building tiles from a draw bag, much like Carcassonne, except they take four tiles rather than one. These are placed in the building market and players use money cards, which they can take on their turn, to purchase them.

Alhambra is more thematic than Qwirkle, but it employs many of the same strategies. If you’re looking for a game like Qwirkle but want to try something with a stronger theme, Alhambra could be the game for you.

If you’re after fun tile-placement games similar to Qwirkle, Hive could be your new favourite. This 2-player game is designed by John Yianni and is a simple yet rewarding game.

The aim of Hive is to surround your opponent’s ‘queen bee’ with your own bees. The tiles are hexagonal pieces with bees on them. Players take it in turns to place their bee tiles and can place their queen bee at any point between turns 1 and 4.

Once the queen bee has been placed, players can choose to move a tile rather than play a new one. Each tile moves in a different way, making Hive a simple but highly strategic game that fans of Qwirkle will get a kick out of.

Sequence is a popular card game that is sure to be loved by anyone after games similar to Qwirkle. Designed by Doug Reuter, Sequence is a 2-12 player strategy game suitable for gamers aged 7 and above.

In Sequence, players work in teams or as individuals trying to place five chips in a row on the ‘board’, which is made up of playing cards. On your turn, you can discard a card in your hand and place a chip on the matching card on the board. You then draw another card.

The rules are very simple, but Sequence is still packed with strategy. Fans of Qwirkle will love the strategy involved in Sequence and everyone, no matter what age, will adore this intense game.

If your family are looking for games similar to Qwirkle, Hey, That’s My Fish is a fun family-friendly board game that has a lot in common with Qwirkle.

Hey, That’s My Fish is a 2-4 player game designed by Günter Cornett and Alvydas Jakeliunas. It is recommended for players aged 8 and above, but younger players can still enjoy this game with some help from adults.

In Hey, That’s My Fish, players move their penguins around hexagonal tiles that represent ice. They collect the fish from the tile they land on by collecting the hex and moving to an adjacent tile.

This means that over the course of the game, the tiles start to disappear and players must avoid getting blocked and being eliminated from the game. The player with the most fish when everyone has been eliminated wins the game.

Q-bitz is a fast-paced, 2-4 player game designed by Peggy Brown. Kids over 8, or over 4 if helped by adults, will love this quick and easy abstract strategy game.

In Q-bitz, each player has a board and a collection of special blocks. In the first round, a card is drawn and it has a special pattern on it that can be recreated using the blocks that each player has.

Players must then race to assemble the pattern and the first player to do so gets the card. Each round is played three times.

In rounds two and three, the rules alter so that players must roll their blocks like dice to get the right symbols for the pattern or they must memorise the pattern and then create it. The player with the most cards at the end of the three rounds wins.

If you’re searching for games similar to Qwirkle and you love chucking dice, Qwixx is the game for you. Steffen Benndorf’s Qwixx can be played by 2-5 players in less than 15 minutes.

The rules of Qwixx are fairly similar to Yahtzee. Players roll dice and use the sum of them to mark off numbers on their scoresheet. The difference, however, is that the dice are different colours. Each round players can mark off the number that is the sum of their two white dice and the sum of coloured dice of the same colour.

Qwixx is a game of luck and is great for families or casual gamers looking for games similar to Qwirkle.

Rüdiger Dorn’s 2-4 player game Istanbul is great for anyone after games like Qwirkle. In this game, each player controls a merchant and four assistants.

Players take it in turns to move their merchants and assistants around the board, taking actions such as collecting goods, earning money, and getting rubies – which you need to win the game.

Istanbul is not an abstract strategy game like most on this list, but it has lots of elements that fans of Qwirkle will love. The strategy and tile-placing parts of Istanbul hit the same marks as Qwirkle and anyone looking for easy and fun board games will find plenty to love here.

Whether you’re a family looking for a new puzzle game or a regular gamer after some fun abstract strategy on games night, our list of 10 great games like Qwirkle covers everything.

Are you searching for more games like Qwirkle? Have any recommendations that didn’t make the list? Let us know in the comments!