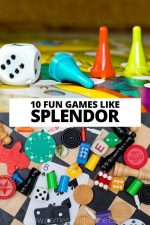 Hitting the market first in 2014, Splendor is a card-based set-building game in which you play as a gem merchant trying to get the most prestige points you can by crafting gems and attracting the fancy of nobles.

With its lush illustrations and production value, as well as it’s tight mechanics, it’s no surprise that this game remains popular. But if the glitter of these jewels is starting to wane for you, I have ten new game recommendations for you to try.

Did I say card-based? I did. But the crossover between these two games is still very strong despite Sagrada involving a dice draw instead of a card one.

For one, this game has another gorgeous and historic setting just like Splendor. You’ll be creating art on the table while crafting your stained glass windows with these d6s. The rules to each individual board you can draw differs and that will help you choose which dice to pick and what design to create.

If you’re looking for games like Splendor because you loved the beautiful look or the fast-pace and simple to understand game-play then this is the choice for you. This 1 to 4 player experience will have you compete to win public or private goals and be the most impressive window maker you can be.

Mai Star is an equally beautiful game to look at but has a slightly more risqué theme. The players take on the roles of Geishas, wooing important guests to increase their popularity and hoping to do so fast as everyone except the first player to use their entire hand is dealt minus points.

The game can run with 3 – 6 players with the difficulty raising with the more people on the table. While there’s a lot of space for distinctly unique game experiences each time you open the box, you’re going to be able to understand the rules of play well within the half-an-hour run time it usually takes to complete a full game.

It will take you longer than that however to master how to play each individual Geisha you can choose.

Wingspan is an amazingly fun game about a charmingly mundane hobby, birdwatching. In this, you’re working to become the best and most respected in your field, or meadow if you prefer, and collect the most points.

You can gain them by playing birds in your space which, like in the game Splendor, will activate effects changing play or drawing different birds to them and so on. It’s a combination of these birds, the eggs or objectives, friendly or competitive, that allow you to build your power and raise your score.

This one has a number of moving parts but its board and rules are extremely intuitive and soon there’ll be nothing stopping you from ruffling some feathers on the birdwatching battlefield. And if you want something fun to break up your day alone indoors Wingspan is playable solo or up to 5 of you can join in.

Azul is replete with beautiful production though, it has a lovely historic Portuguese setting in which players fill their boards with a plethora of gorgeous tiles to create a wall for the palace that will astonish King Manuel I, who is storied to have become obsessed with beautiful decorative tiling after a trip to Moorish Spain in real life.

This game is 2 to 4 players but this one can test friendships so make sure it’s just your diehards at the table. Your tile-placing will directly affect the other players’ ability to progress with their own and there are mechanics to hand yourself penalties in the final tally just to get one other on the other tilers at the table.

SmashUp is a game with so much variety that it’s hard to describe. Players choose two of the games’ factions (from a list that includes: zombies, pirates, ninjas, dinosaurs and much more) to “smash” together and like in Splendor you’re then drawing to create a chain reaction that will destroy the bases placed on the board.

These bases, however, will often need more than one player to destroy them and those involved will split the points dependent on who has the most, second-most and third-most of their character cards on it.

This is one of the wackier games on the list, nevertheless, I count it as a game similar to Splendor if for nothing else than it’s swift play. It can often feel even faster-paced because of the cut-throat nature of the gameplay.

When you’re thinking of board games like Splendor it’s impossible not to bring up crowd favourite 7 Wonders. In this game you’re playing as the leader of one of seven great ancient civilisations hoping to gain supremacy over the other players by making an amazing Wonder.

This game, like Splendor, is about pooling and appreciating your resources to create more opportunities for you. 7 Wonders can have 3 – 7 players, as you might expect, and it has some added complexities if you’re looking for a little more challenge with your game.

However, even with the added mechanics, shared card pools, for instance, a group of friends working together won’t find it hard to make sense of play and it is still easily dealt with within a half-an-hour timeframe.

Godsforge is similar to Splendor not just in its fun gameplay mechanics but also in its resource hoarding, only this time they’re used to attack and defend themselves through the game.

Players are desperate spellcasters trying to hold on to as much of the dwindling resource Ethirium as they possibly can. Godsforge involves dice rolling and battle as mechanics but like with Splendor, it is still dependent on you card-drafting and token collecting so uses a good amount of strategy.

While it’s not very complex to grasp it is suitably diverse each time you pick up the box. This game would suit anyone who wants Splendor with a little more fighting spirit. And for 2 – 4 players, it’s sure to end in just as many (playful) shouting matches.

Jaipur is a game in which you work to become the maharajah’s most valued merchant and is a tidy little two-player in a snazzy little trade-themed game.

The gameplay revolves around you collecting camels to build your “herd” and selling your goods to receive tokens as well as blind-drawn bonus tokens to grow your exorbitant wealth.

Jaipur blends dynamic speedy gameplay with a little strategy and a little luck to bring you something similar to Splendor. As well as that, it’s Arabian setting comes with a delightfully colourful set of cards and tokens that add to the game’s fun.

Century: Spice Road is a walk through the centuries in the shoes of a spice trader. Another game like Splendor in that it lets you “buy and sell” your various spices.

This game lets players take one action per turn which means it’s very easy to get a steady pace going with the 2 to 5 players you can have. Enacting your seven-step plan one step per turn will just feel that much sweeter when it pays off.

The strategy involved pulls you into the game easily and this is probably one of the games most similar to Splendor because of that. But it has enough differences that it’s still extremely interesting to pick up next time you’re looking for something new.

As well as having a number of expansions and extra materials to collect, the company behind Splendor has released an updated version of the game themed around Marvel Comics.

The new Splendor: Marvel lets players fight to complete the Infinity Gauntlet by collecting all the stones before the other players do. Just like the game Splendor, it follows some core rules you’ll recognize however it has many different aspects as well.

These include a revised colour structure, a new endgame event and an “Avengers Assemble” tile which really make this feel like an imaginative modern take on the premise by the team rather than some hackneyed cash grab.

If you’ve been feeling a little lacklustre about your copy of Splendor or you’re just looking to build your collection then there’s something here you’re sure to like. Any of the games on this list are guaranteed to be a fun purchase.

Are you searching for more games like Splendor? Have any recommendations that didn’t make the list? Let us know in the comments! 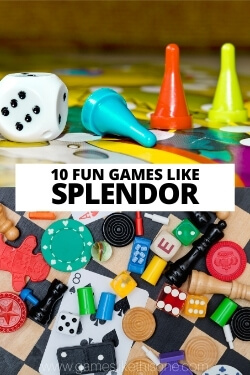