Games like Ticket to Ride have delighted players since its inception. The strategic building game encourages players to build the best railroad possible and to become a tycoon within the confines of the game. There are countless board games similar to Ticket to Ride that follow comparable themes and ideas.

If you love railroads or just building something, then Ticket to Ride is probably one of your favourite games to play. However, if you’ve played it too many times and are no longer having as much fun with it as you once did, then you’re likely looking for a few more games like it.

So, if you want to mix up you game nights, these ten great board games that are like Ticket to Ride are sure to delight.

If you like Ticket to Ride but the setting is a bit too modern for you, then you’re sure to love Carcassonne. This is a tile-laying game that is based in medieval France where you must build cities, fortifications, and civilizations and protect what you have built from your opponents.

Carcassonne is easy to learn and fairly quick to play, taking around 30 to 45 minutes to play an entire game. This means that you don’t need to spend hours trying to learn the new complicated game if you want to have a fun games night and mix up what you’re playing.

Carcassonne can accommodate two to five players and is great for players ages seven and up, meaning that it is the perfect game to play with the entire family. One thing is for sure, it is fun and entertaining for all ages.

If you love Ticket to Ride for its strategic planning of where to build various rail routes, then you sure to enjoy Power Grid. This game concentrate on supplying cities with power and crude materials rather than building a railroad empire, however, it is still a worthy addition fo this list of board games like Ticket to Ride.

The objective of Power Grid is that you work in a power station and that you must supply power to various cities and settlements once they reach a certain size. You compete against your playmates to build the biggest network.

You can purchase new power plants and you need to efficiently supply power at a bigger and better scale than the others playing the game.

This is a pretty long and complex game as it takes about two hours to play from start to finish, so it’s not for the lighthearted. Because of its complexity, it’s better for older children ages twelve and up, but it is still and wonderful game for everyone and the perfect game to play if you’re looking for something similar to Ticket to Ride.

If you enjoy Ticket to Ride but the expansion and building of railroads is just a bit antiquated for you, then you’re sure to enjoy Airlines Europe, a game that is very similar to Ticket to Ride but concentrates on securing airline routes across Europe rather than railways.

The objective of Airlines Europe is fairly straightforward and, at its core, is simply a stock game where the players who own the most stock in a successful airline will end up winning the game.

There is, however, far more to it than just that as there is quite a bit of strategy and savvy involved that is sure to delight all those who are looking for games like Ticket to Ride.

The game is perfect for two to five players and it takes a bit over an hour to play from start to finish. It is family-friendly and is a good game to lay with those ages ten and up.

Taking a bit of a detour from the route-building games like Ticket to Ride, Power Grid and Airlines Europe, anther fantastic addition to this list is Small World, a holistic world-building game that is sure to thrill and delight all those who play it.

This game is a strategy game in which players view to conquer and settle a world that too small to accommodate everyone. There are lots of different ways to go about this and the fantasy elements of the different characters in play (which includes dwarves, wizards, orcs and giants), adds a bit of magic and whimsy to what ultimately results in quite a cut-throat game.

The game takes about an hour to play from start to finish and can play two to five players. It is a family-friendly game that is fine for ages eight and up.

Going back into the railroad theme, the game Steam is an excellent choice for those looking for great board games like Ticket to Ride. This game is another strategic route-building game that is sure to be just as fun as your other favourite railroad game!

This double-sided board game is beautiful and a lot of fun to play. It is based in North America at the start of the railroad age and it is up to players to build the perfect routes, upgrade small towns as hubs and transport the most goods along their routes. The players who are the best at this win the game.

Steam can be played with three to five players and the game takes about ninety minutes to play from beginning to end. The game is great for ages ten and up, meaning that it’s perfect for family game nights.

One of the most famous strategy and world-building games out there is Catan and it’s for that reason that it has a place on this list of games like Ticket to Ride.

Though it isn’t as much of a route or road planning game like a lot of the other games on this list, it does lean on the strategic planning and building something from nothing themes that Ticket to Ride covers.

Originally called The Settlers of Catan but rebranded to simply Catan a few years ago, this game follows the concept that you and your playmates are colonisers of a new land called Catan. Through strategic moves, you compete to create the most effective and profitable colony with various pitfalls that may be thrown at you along the way.

Catan can take upwards of two hours to play from start to finish and it is a fairly complex and complicated strategy game, so it’s not for the faint of heart — make sure you’re ready to commit some time!

It can accommodate three to four players and is fine for ages ten and up.

The Castles of Burgundy

This tile-laying game like Ticket to Ride is a great game to play if you like the building themes of the railroad game but like the medieval-France setting of games like Carcassonne. Another great strategic building game, The Castles of Burgundy is sure to entertain all those who like Ticket to Ride.

The concept of this game is that you are a settler in medieval era France and each player is a minor aristocrat who is trying to get their own land and cultivate their fiefdom. That comes to building fortifications, farms, castles and cities and even more. The player who does that best at this wins the game.

The Castles of Burgundy is a fairly easy game to play and can take about thirty to sixty minute so play from beginning to end. It’s good for two to four players and acceptable for ages twelve and up.

Getting away from the age of railroads or even the medieval era, Through the Desert is an excellent game similar to Ticket to Ride that is based on, fittingly, getting through the middle eastern desert alive and effectively.

As mentioned, the objective of Through the Desert is to make a caravan trade route through the desert by laying tiles and strategically mapping out the perfect, most efficient and most profitable route. There are lots of curveballs that can be thrown your way in this game and the player who builds the best caravan route wins the game.

Through the Desert can be two to five players and it takes about forty-five minutes from beginning to end. It is suitable for ages ten and up, meaning that it is the perfect game for families as well as adults.

Splendor is a fun strategic card game that is sure to delight those who are looking for some card games and board games similar to Ticket to Ride. Set in the renaissance era, this is a card-based game that has players buying and selling gems, getting property and trying to appease the nobles.

The objective of Splendor is pretty simple and the game is also relatively easy to pick up. Each turn, players have a series of choice that they can make. If they are strategic enough, they will gain the most influence over the game and win it all.

Splendor is easy to learn and play and lots of fun. It is great for two to four players and one round can be played in just thirty minutes. It is perfectly suitable for ages ten and up.

And finally on this list of games like Ticket to Ride comes yet another railroad-based board game: TransAmerica. This game is similar to your other favourite railway game where you must build rail routes strategically and better than your opponents.

The objective of TransAmerica is to build a rail network connecting five cities across America before your opponent does. Each turn, players can lay a piece of rail and the first to effectively and completely connect the Unite States by rail wins the game.

This game is really easy to learn but a lot of fun to play, meaning that it also doesn’t have the confusing complexity as some of the games on this list do. TransAmerica can accommodate up to six players and can be played in about thirty minutes. It is great for ages thirteen and up.

Finding great building games like Ticket to Ride is not a difficult task, considering how many games there are out there. The most trying thing you have to face now is deciding which of these fantastic games you’re going to play first!

Are you looking for more games like Ticket to Ride? Have any other game recommendations that didn’t make the list? Let us know in the comments! 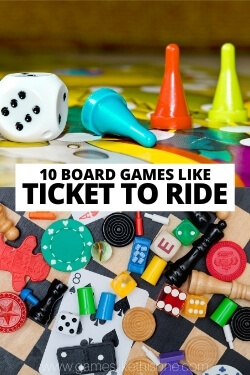