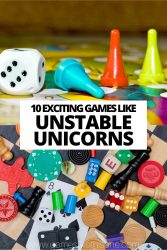 Unstable Unicorns is a fun, light-weight card game that has been bringing together and tearing apart friends since its release in 2017. If you’re looking for fun card games like Unstable Unicorns, look no further.

Created and illustrated by Ramy Badie, this cute 2-8 player card game has players compete to build a unicorn army. Players each begin with an adorable baby unicorn card. Each turn players can either play a card from their hand or draw a card. The aim of the game is to get seven unicorns in front of you – sounds simple, right?

Well, Unstable Unicorns is very much a ‘take that’ game. Unicorns and action cards have different powers, often ones that let you destroy your opponents’ unicorns. There are also some special ‘NEIGH’ cards that let you block another player’s action.

So if you’re after more cute yet dark, fun yet brutal card games similar to Unstable Unicorns, we’ve got you covered.

Llamas Unleashed is a recent release from the makers of Unstable Unicorns. This 2-8 player card game has players, much like Unstable Unicorns, competing to collect seven animals – llamas, alpacas, goats, and rams.

The mechanics of Llamas Unleashed are near-identical to Unstable Unicorns, but with a few twists. Since there are four different types of animals, some cards only affect one type of card. So “Goatmeal Raisin Cookie” will only affect your goat cards.

In addition to this, Llamas Unleashed has a “herd bonus” mechanic that benefits players with more than three of one type of animal in their ‘field’.

So if you’re looking for games like Unstable Unicorns, you’ll get just as much fun out of Llamas Unleashed whilst enjoying some new rules and lots of new, cute cards!

Exploding Kittens is a super popular card game that fans of Unstable Unicorns are sure to love. This speedy, 2-5 player card game is loved by regular gamers and families alike.

Designed by Matthew Inman, Elan Lee and Shane Small, Exploding Kittens is a game of risk-taking and chance with a small dose of strategy. Players take it in turns to draw cards from the deck. In the deck are several ‘exploding kitten’ cards. If you draw one of these, you’re eliminated from the game.

But within the deck, many cards allow you to take special actions, such as peeking at the cards to come or forcing other players to draw multiple cards.

Exploding Kittens is an intense and exciting ‘push-your-luck’ card game that is great for players looking for something like Unstable Unicorns.

If you’re after easy card games like Unstable Unicorns, Taco vs Burrito could be your new addiction.

This 2-4 player card game is playable by gamers aged 7 and above – but adults will get plenty out of Taco vs Burrito too.

Players are competing to build the craziest taco or wildest burrito. On your turn, you draw a card and then either add an ingredient to a taco or burrito, use a ‘tummy ache’ card on another player’s meal to reduce its value, add ‘hot sauce’ to increase the value of your meal, or use an action card.

Designed by Alex Butler when he was just seven years old, Taco vs Burrito is a silly draw-and-play card game with plenty of ways to ruin your opponents’ tacos and burritos!

In Happy Little Dinosaurs, 2-6 players compete as dinosaurs trying to dodge ‘life’s little disasters’. The game is won by the first player to reach 50 points or be the last dinosaur standing.

Players use ‘point’ cards to escape disaster cards drawn from the deck. Each round, players choose a ‘point’ card from their hand and secretly play it. Then the player with the highest card moves their dinosaur meeple along the ‘escape route’ on their player board – this is how points are scored.

The player with the lowest card takes the disaster card. Then all players move their dinosaur along their ‘escape route’ by the number of disaster cards they have.

The point cards also have special abilities, such as allowing players to discard, draw, and swap point cards. And if you collect three disaster cards of the same type or three different types, you are automatically eliminated from the game.

In Here to Slay, 2-6 players take on the role of adventurers on a mission to slay monsters. Each player chooses an adventurer character to lead their party – each with their own class and skill. This will give them special abilities throughout the game.

Players then draw a hand that is made up of heroes, items, and magic cards. Throughout the game, players can play heroes, use items, cast magic, challenge their fellow players, and attack monsters. To win the game, you must either defeat three monsters or assemble a team of six heroes.

Fluxx is a fast-paced, 2-6 player card game designed by Andrew and Kristin Looney. If you’re looking for fun games similar to Unstable Unicorns, Fluxx is a great game to bring out at parties.

But the twist in Fluxx is that the rules are always changing. You could play a new rule that lets you draw five cards rather than one. Or you could play an action that lets you steal a keeper from one of the other players. Fluxx is a quick and ever-changing game that fans of Unstable Unicorns will love.

If you’re after games like Unstable Unicorns, you’ll find a near-identical game in Runes & Regulations but with some extra twists. Players use cards from the deck to cast spells, play mythical creatures, and use passive-aggressive regulations to attack the other players.

This is a fun twist on Unstable Unicorns that will cause entertainment and infuriation on games nights.

If you’re hankering for games like Unstable Unicorns, Killer Bunnies could be the game for you. Designed by Jeffrey Neil Bellinger, the 2-8 player card game has all the cute brutality of Unstable Unicorns.

Players are collecting carrots in search of the ‘magic carrot’. But while they search they must keep their bunnies alive. The bunnies are armed with weapons and players will try to kill off each other’s bunnies or force them to starve in order to win the game.

You’ll have to be strategic in deciding how to spend your turn – do you attack, defend, or keep searching for the magic carrot?

Sushi Go! is a light and easy pick-and-pass card game that fans of Unstable Unicorns will adore. Designed by Phil Walker-Harding and with super cute art by Walker-Harding, Nan Rangsima, and Tobias Schweiger, Sushi Go! is a great game for families and friends.

In Sushi Go!, 2-5 players compete over three rounds to score points with sushi cards. Players pass round a hand of cards, picking one at a time, and playing them in front of them.

Some sushi cards are worth more if you have lots of them, others need sets of three to be worth points or else they are worthless. There are also dessert cards that are pointed at the end of the game. Sushi Go! is a fun combination of luck, strategy, and cuteness.

Are you a fan of cute card games? Why not check out our list of games like Sushi Go!

The final suggestion on our list of games like Unstable Unicorns is perfect for those who enjoy the dark side of the game. Gloom is a 2-4 player card game designed by Keith Baker. Players each control a family and the aim of the game is to make your family as miserable as possible!

Gloom has beautiful transparent cards designed by Michelle Nephew, J. Scott Reeves, and Todd Remick. These cards can be placed over your family members’ cards to make horrible things happen to them – from being left at the altar to being pursued by puppies.

Over the course of the game, players want to make their family members as miserable as possible before killing them off.

Once a player has killed off their whole family the game ends and the winner is the player with the least points (as miserable dead family members grant negative points). But players can also make good things happen to their opponents’ families too!

Are you looking for more games like Unstable Unicorns? Have any recommendations that didn’t make the list? Let us know in the comments! 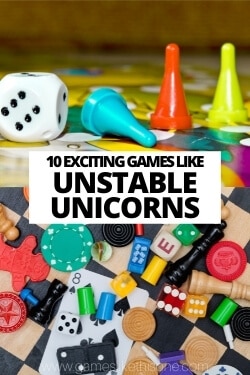